Joint statement by Nicolas Sarkozy and David Cameron on Libya 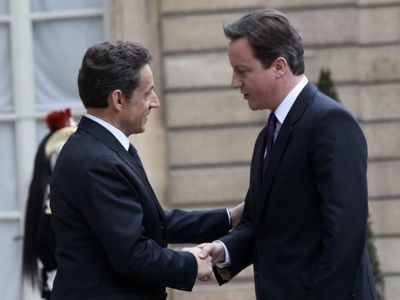 Tomorrow in London, the international community will come together to support a new beginning for Libya. A new beginning in which the people of Libya are free from violence and oppression, free to choose their own future.

The world has witnessed momentous events over the last ten days. Following an appeal by the Arab League to take action to protect the people of Libya, on the 17 March the United Nations Security Council passed an historic resolution to protect civilians from the violence unleashed by Qadhafi’s war machine.

Two days later, the Paris Summit emphasized the determination of the participants to act collectively and resolutely to give full effect to UNSCR 1973.

The same day, a coalition of countries took action to help break the siege of Benghazi and drive back Qadhafi’s forces. Hundreds of thousands of people have been rescued from the brink of humanitarian disaster.

Our countries are resolved to continue to enforce UNSCR 1973 to protect the people of Libya. More countries from Europe and the Arab world are joining us. It is only when the civilian population are safe and secure from the threat of attack and the objectives of UNSCR 1973 are met that military operations will come to an end.

We emphasize that we do not envisage any military occupation of Libya, which would be contrary to the terms of the Resolution. We reaffirm our strong commitment to the sovereignty, independence, territorial integrity and national unity of Libya.

Military action is not an objective as such. A lasting solution can only be a political one that belongs to the Libyan people. That is why the political process that will begin tomorrow in London is so important. The London conference will bring the international community together to support Libya’s transition from violent dictatorship and to help create the conditions where the people of Libya can choose their own future.

In the words of the Arab League resolution, the current regime has completely lost its legitimacy. Qadhafi must therefore go immediately. We call on all his followers to leave him before it is too late. We call on all Libyans who believe that Qadhafi is leading Libya into a disaster to take the initiative now to organize a transition process.

In our view, this could include the Interim National Transitional Council, the pioneering role of which we recognize, the civil society leaders as well as all those prepared to join the process of transition to democracy. We encourage them to begin a national political dialogue, leading to a representative process of transition, constitutional reform and preparation for free and fair elections.

To help Libya make this transition, we are today also calling on all the participants at the London conference to give their strong support.

We have averted a humanitarian disaster but Libya still faces a humanitarian crisis. In London, our countries will come together with the United Nations, the European Union, the African Union, NATO and the Arab League to consider how we can bring urgent relief now, and how we can support the needs of the people of Libya in the future.

In the last few weeks, the Libyan people have demonstrated their courage and their determination. Like all other peoples, they have the right freely to choose their leaders.

We must unite to help them make a new beginning.

Joint Statement by France, Germany and UK dealing with Iran

Statement by Nicolas Sarkozy at the 66th UN General Assembly

David Cameron’s Response to the Parliament’s Report on Syria

David Cameron gave about the threat level in the United Kingdom