The Venezuelan Minister of Correctional Services, Iris Varela, has announced on her Twitter account the expulsion of a French citizen known as Frédéric Laurent Bouquet, December 29, 2012

Mr. Bouquet (photo) had been arrested in Caracas on June 18, 2009, with three Dominican nationals in possession of an arsenal. In the apartment he had acquired, forensic police seized 500 grams of C4 explosives, 14 assault rifles including 5 with telescopic lenses, 5 with laser sighting and one with a silencer, special cables, 11 electronic detonators, 19,721 cartridges of different calibers, 3 machine guns, 4 hand guns of different calibers, 11 radios, 3 walkie talkies and a radio base, five 12-gauge shotguns, 2 bulletproof vests, 7 military uniforms, 8 grenades, one gas mask, one combat knife and 9 bottles of gunpowder.

During his trial, Mr. Bouquet admitted he had been trained in Israel and was an agent of French military intelligence service (DGSE). He admitted planning an attack to assassinate Constitutional President Hugo Chavez.

Mr. Bouquet had been sentenced to four years in prison for "illegal possession of weapons." He served his sentence. He was taken from his cell by Ordinance No. 096-12 of trial judge Yulismar Jaime, then was expelled for "undermining national security" under Article 39 paragraph 4 of the Migration and Foreigners Act. 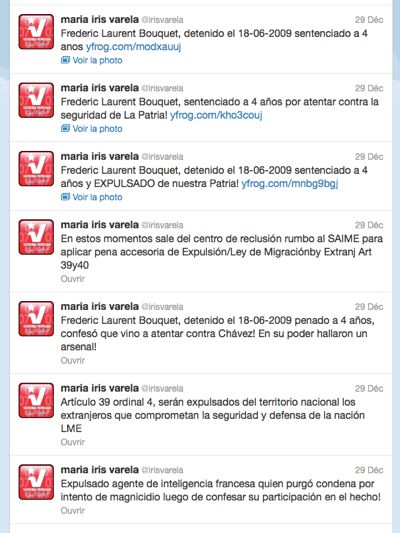 Venezuelan authorities had so far refrained from communicating on this subject. The facts were confirmed by the spokesman of the Quai d’Orsay, Philippe Lalliot. The French Embassy in Caracas declined to comment.

From our investigation we can conclude that:

(1) President Nicolas Sarkozy had ordered the assassination of his counterpart Hugo Chavez;

(2) the operation was a fiasco;