While Russia and the United States reached the beginning of an agreement on the Middle East in general and Syria in particular, the war continues in Syria. This paradox can be explained foremost by the indiscipline and hatred shown by the Turkish and Saudi governments. According to Thierry Meyssan, by revealing the role of Hakan Fidan, the Wall Street Journal is sending a warning to Ankara. 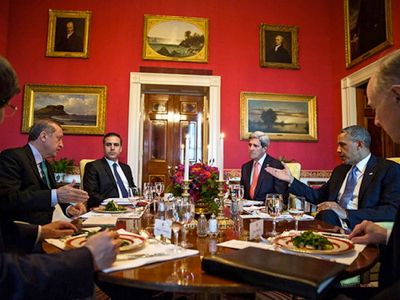 MM . Erdoğan , Fidan , Kerry and Obama during a meeting at the White House in May 2012.

The Turkish press has devoted many articles to comment on the study by the Wall Street Journal on Hakan Fidan. [1] With a chauvinist unanimity, it considers that the attack upon him is an a posteriori proof of the soundness of Prime Minister Recep Tayyip Erdoğan’s policy of independence toward the United States. Is this really the case?

According to the Wall Street Journal, the head of MIT (the main Turkish secret service) is actually the number two man of the regime, second to the Prime Minister and ahead of the president, Abdullah Gul, and of the foreign minister, Ahmet Davutoğlu.

The arrival of Erdoğan’s right hand man at the head of MIT, in May 2010, would have marked the beginning of Turkey’s non-US policy: arrest and conviction of senior officers once linked to the Pentagon (Ergenekon trial), support for the Muslim Brotherhood and the Arab Spring and attempt to use the Syrian conflict to dismember the country and create a Kurdish state.

Above all, the Wall Street Journal accuses Hakan Fidan of supporting jihadists in Syria, including those who are most virulently anti-Western, despite warnings from Washington. It cites a Kemalist parliamentarian, Mehmet Ali Ediboglu, who certifies having seen a dozen Turkish police cars escorting over fifty buses transporting jihadists to Syria, that is to say, a convoy of more than 2000 fighters. This would not have been an isolated incident.

However , the newspaper fails to mention that unlike Recep Tayyip Erdoğan, Hakan Fidan is not a Muslim Brother, but was close to Fethullah Gülen (President Gul’s guru). Similarly, investigators from the Wall Street Journal overlook his past, as if the head of the Turkish secret services came out of nowhere. The Journal mentions his time at the head of the Turkish International Cooperation Agency (Tika) without indicating its role in expanding the influence of Ankara and Central Asia through the Ferghana Valley to China. It evokes the Israeli accusations of collaboration with Iran while working at the IAEA, but noted that Mr. Fidan was appointed head of MIT three days before the Mavi Marmara affair to oversee the operation.

For our part, we interpret this controversy in reverse: a month ago, nothing in Turkish politics collided with U.S. interests. On the contrary, everything was done on orders from Washington.

Thus, the conviction of senior officers is not a blow to the United States, but a penalty for their willingness to distance themselves from the US and get closer to the Chinese People’s Army as evidenced by the conviction with them of officials from the tiny Maoist workers’ Party [2] .

Supporting the Muslim Brotherhood in North Africa is not a sudden whim of Ankara, but the execution of a State Department plan coordinated through Hillary Clinton’s office by "sister" Huma Abedin and at the William J. Clinton Foundation by "brother" Gehad El- Haddad, also responsible for communications for Erdogan’s party. Moreover, it will be observed that the mother of Ms. Abedin with Ms. Morsi headed the female branch of the Brotherhood, while the father of Mr. el -Haddad was the diplomatic adviser to President Morsi.

Finally, attempts to create a Kurdish state in Syria are in line with Pentagon intentions to divide Syria into several states, according to the map published in 2006 by Ralph Peters [3]. And Hakan Fidan, who participated in the secret 2009 negotiations with the PKK in Oslo is the best Turkish expert on the subject.

In addition, the Turkish political shift did not take place in May 2010 with the arrival of Hakan Fidan as head of MIT, but in 2011, during the war against Libya. At the time, it was under pressure from the USA State Department that Ankara became aware of the opportunities afforded by the US/Muslim Brotherhood agreement. It is from this moment that Recep Tayyip Erdogan is again a "brother", despite his alleged renunciation of the Brotherhood during his incarceration in 1998 and his "conversion" to secularism.

The real problem lies elsewhere: support for jihadists. At the beginning of the war in Syria, it was funded by Qatar and coordinated by NATO from the Turkish Incirlik base. There was nothing to complain about. But since the Russian-US agreement on the crisis of chemical weapons, the United States withdrew from the Syrian military conflict while Turkey and Saudi Arabia continue the game. Therefore, the article in the Wall Street Journal must be seen as a warning addressed to Mr Erdogan and Fidan. Not having conquered Syria in time, they are asked to give up regardless of the consequences for them in domestic politics.

Hakan Fidan, who worked for NATO intelligence services during the Kosovo war and studied in the United States, should understand this message.