Russian Counter-offensive on the eastern front

The tactic of the United States to economically isolate Russia to prevent it from coming to the aid of the Ukrainian population has had the opposite effect to what was intended: it is pushing Moscow in the arms of Beijing, so that, in the long run, the Eastern European-Asian block which is gaining steam will surpass the power of Western countries. 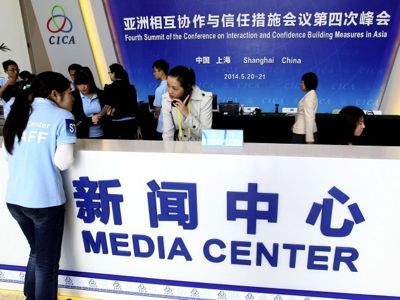 In Shanghai, everything is ready to host the fourth CICA summit.

While NATO convenes its 28 defense ministers in Brussels on May 21 to strengthen its forces to confront Russia, which includes improving the training of Kiev’s military and paramilitary forces (including squads that have attempted the murder of the Secretary of the Ukrainian Communist Party), and the EU adopts new sanctions against Russia, this aggression is being answered not from Moscow but from far-away Beijing. President Putin begins his official visit to China May 21, during which the two countries will sign 30 bilateral agreements, whose first effect will be to neutralize Washington’s plan aimed at "isolating Putin’s Russia by cutting off its economic and political ties to the outside world."

The agreements’ scope is strategic. A contract worth $270 billion between the Russian state company Ros- neft and China’s National Petroleum Company provides that Russia will supply more than 700 million tons of oil to China over the next 25 years. Another contract provides that the Russian state company Gazprom will supply 38 billion cubic meters of gas per year to China, by 2018, or about a quarter of what it provides today to Europe. The Chinese plan investments amounting to $20 billion, concentrated in infrastructure, Moscow plans to strengthen the pipeline between eastern Siberia and the Pacific, joining it to a 2500-mile pipeline to supply China. Beijing is also interested in making investments in the Crimea, in particular for the production and export of liquefied natural gas, and for the modernization of agriculture and the construction of a cereal terminal. At the same time Moscow and Beijing are planning to abandon the dollar as the currency for trade in the Asian region. And Russia is planning its own payment system, modeled on China’s Union Pay, whose credit cards can be used in more than 140 countries, which ranks it second in the world after Visa.

But, as it was easy to guess, Russian-Chinese cooperation will not be limited to the economic area. Presidents Vladimir Putin and Xi Jinping, according to diplomatic sources, will make a "substantial declaration” on the international situation.

Their convergence on strategic interests will be exemplified by a strategic joint exercise that navies of the two countries plan to carry out in the South China Sea, taking place just after a large U.S. air and naval exercise in the Philippines. And a military agreement under which Moscow will supply Beijing with the multirole fighter Sukhoi Su-35, Lada class submarines and the most advanced S-400 missile defense systems has practically been concluded.

The Conference on Interaction and Confidence Building Measures in Asia (Cica) was founded at the initiative of Kazakhstan in 2006 and its permanent secretariat is based in Almaty. The rotating presidency will be handed by Turkey to China at the opening of the next summit in Shanghai on 21 and 22 May 2014.

To emphasize the convergence of interests between Moscow and Beijing, Putin is speaking at the Conference on Interaction and Confidence Building Measures in Asia (CICA), which be chaired by Xi Jinping, to be held in Shanghai on May 20-21 with the participation of Iraqi Prime Minister Nouri al-Maliki, Afghan President Hamid Karzai and Iranian President Hassan Rouhani. That’s a slap in the face for the United States, which, after having spent $6 trillion in the wars in Iraq and Afghanistan now sees China increasing its economic presence in these countries.

China is buying about half of the oil produced in Iraq and is making large investments in the oil industry; in Afghanistan, China is investing primarily in mining, after Pentagon geologists have discovered rich deposits of lithium, cobalt, gold and other metals. And, by opening outlets for Iran to the east, Russia and China effectively nullify the embargo carried out by the U.S. and EU.

It’s not going any better for Washington on the western front. The possibility, proposed by the Obama administration, of reducing within a decade the gas furnished by Russia to Europe by more than 25 percent and replacing it with liquefied natural gas supplied by the United States, is proving to be a bluff. This is confirmed by the fact that, despite the sanctions announced by Berlin, German companies continue to invest in the Russian energy industry — the RMA Pipeline Equipment, a manufacturer of valves for oil and gas pipelines, is opening its largest facility in the Volga region. And Gazprom has already signed all the contracts, including one for $2.75 billion, with the Italian company Saipem (Eni) for the implementation of the South Stream gas pipeline that, bypassing Ukraine, will bring Russian gas via the Black Sea up to Bulgaria and from there into the EU.

Even if the U.S. were able to block the South Stream, Russia could divert the gas to China. From now on, the "East Stream" is open.