This is almost turning into a farce, albeit a tragic one: since 9/11 there has been one single terrorist attack in which the authors, who are supposed to try and remain unidentified, have not somehow left ID documents behind. For sociologist Jean-Claude Paye, what might look like repetitive asininity must be interpreted as a rhetorical device used by those in power to achieve sideration. It is because the official version is absurd that we may not, must not question it. 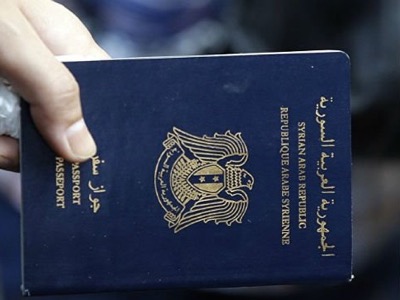 ﻿ In the context of the enquiry about the Paris massacres, a Syrian passport was found next to one of the kamikaze bombers of Stade de France. ﻿After being pointed out as responsible for the attacks by President Hollande, ‘the Islamic State’ claimed that they had engineered the onslaught. The French executive, that had already stated that they wanted to take action in Syria allegedly against ISIS, but actually against Bachar El Assad, who ‘has to go’, sees in this a significant clue that comfort their military expedition. Using doublespeak – supporting an organization while pointing at it as the enemy and calling terrorists people who were previously hailed as ‘freedom fighters’, is not some prerogative of the French government. Producing one’s own enemy has become a pivotal process in Western strategy, one that comforts an imperial structure in which there is no separation any more between inside and outside, between law and sheer violence, between citizens and enemies. In Belgium the muslim preacher Jean-Louis Denis ﻿is tried in court for having promoted the jihad in Syria among young people because he is suspected of being acquainted with ﻿ Sharia4Belgium, a group that is labelled as terrorist. His lawyer exposed the equivocation in the prosecution when he reminds the court that kids were indeed sent to fight for the Islamic State in Syria but by the Belgian intelligence service. He was referring to the part played by an undercover agent of the Belgian federal police.

It seems that in Paris too a major concern for the terrorists was to make it easy for them to be identified. Yet this paradox is no longer really a surprise. The miraculous find of ID papers has now become a classic feature in such circumstances. It is a recurring event, a repetitive compulsion that points again and again at people who belong to some jihadist movement.

In the official version for 9/11 the FBI claimed that they found the unscathed passport of one of the pilots near one of the towers that were reduced to ashes by explosions whose heat melted even the steel columns in the buildings’ structure. The fourth plane’s crash near Shanksville also yielded a passport which, though scorched, still made it possible to read the person’s first name and surname and to see his ID photo. This is all the more disturbing as nothing at all was left in the crater, no part of the plane or of the people travelling in it, only this partly scorched passport.

Unlikelihood as measure of truth

In the case of the attack at Charlie Hebdo, investigators found the ID papers of the elder Kouachi brothers in a car they had abandoned in the north-east of Paris. This document allows them to conclude that the authors of the attack were known to the anti-terror department as ‘pioneers of the French Jihad.’ The ‘hunt’ could begin. How can killers who operate with such professional skill make such blunder? It is an elementary caution known to any burglar that you do not to take ID papers along.

Since 9/11 unlikelihood has become part of our lives. It has become the basis on which truth is assessed. Reason is banished. We must not believe what is said but the speaking voice, whatever nonsense it may utter. The more patently absurd, the more unwavering our belief in what is stated must be. Unlikelihood has turned into the measure of truth.

The discourse developed around the Merah or the Nemmouche affairs testifies to it. While besieged by dozens of policemen Merah is said to have left his flat to call a France 24 journalist from a public cabin so as not to be identified. He then allegedly returned to be conveniently killed by a sniper who is said to have shooted ‘in self-defence’ with ‘non lethal weapons’.

Nemmouche, the author of the killing in the Jewish museum in Brussels, is supposed not to have thrown his weapons away since he wanted to sell them. And he chose the most closely monitored international transport, the bus connecting Amsterdam, Brussels and Marseilles. A ‘random border control’ allegedly resulted in his being caught.

The sideration of “national unity”

In any case the derealizing nature of what is presented results in sideration. Like the Gorgon’s look it turns us into stones. It shows that something is wrong in discourse. It highlights a flaw that is not intended to deceive us but to break us into inconsistent parts. The report of how the attacks occurred is an exhibition enforced upon the audience. It exists outside of any representation and results in sideration, not so much because of the dramatic nature of events as because of the impossibility to decipher the real. The audience can only retrieve some measure of unity through a fuller unreflective adhesion to what is stated. A fusion occurs with the one who names. We have to give up any distance with what is said and shown. “National unity”, the fusion between those who monitor and those who are monitored can then take place. Indeed exposing flaws in the discourse of power on those various attacks results in a form of psychosis and the suppression of any defence mechanism, not only in front of some definite actions or statements, but towards any action and statement of power, for instance laws such as the law on intelligence that takes privacy out of the field of basic liberties.

An act of war against the people

Though it had been drafted for over a year the law on intelligence that was voted in June 2015 was presented as a response to the Charlie Hebdo attack. The law makes it legal to set up ‘black boxes’ with Internet access providers so as to capture users’ metadata in real time. It also allows for the setting of mikes, of locator transmitters, and of spy software and cameras. Those who are subjected to these investigation techniques are not agents of a foreign power, but French citizens. These are treated as though they were enemies of an executive power that decides on and monitors those secret devices. Under cover of fighting terror, this law makes existing measures legal, giving the executive a permanent, surreptitious and almost boundless facility to monitor citizens. Its total inefficiency when it comes to prevent attacks shows that what is targeted are French people not terrorists. As it changes the nature of intelligence services, from espionage to monitoring citizens, this law is an act of war against them. Evidence of its reality is provided by the recent slaughter in Paris.

Bush, Obama – change in continuity
The Suspension of Fundamental Rights