Ankara and Bagdad have reached a secret agreement to create a new means of communication between them and to cut the customs revenues of Erbil, the regional Kurdish government. Iraq will deploy 13,000 men from 12 October to guarantee the control of this route, the security of which will be guaranteed by the Turkish army from November. Then it will be possible for Turkey to invade the Iraqi Kurdistan. 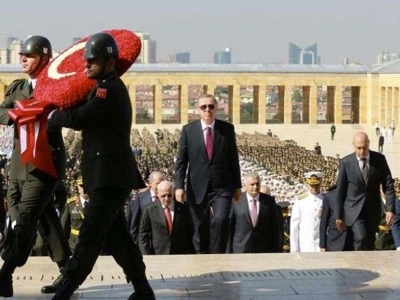 The referendum of the Kurds of the Iraqi Kurdistan which poses the question of independence, creates new situations and apparently, new aims. It accelerates the development of the Kurdish issue and the redrawing of the borders in the region. As a function of what precedes and of the dynamic of things, first the borders will be changed in Iraq. Then, similar developments will be undertaken in Syria and, following on from this, Turkey and Iran. Such is the dynamic of things, that originates in the history of the Kurds and from the willingness of the United States and Russia to be present and wanting to have a slice of region’s energy-packed cake as well as other things.

In this region, 27 years after Saddam invaded Kuwait, a war has developed that may go on for the same length of time. This war will take place on three levels.

At the highest level, Washington clashes fundamentally with Moscow. However, this war is not direct — rather, it is conducted through other forces. The aim is to share the geo-energetic and geo-political cake.

At the second level, Teheran clashes with Tel-Aviv, Iran against Israel. Iran is going to create a corridor on the axis Teheran - Bagdad - Damascus, which will provide it with the opportunity to support the Hezbollah of Lebanon by sending it weapons — and other things besides. Of course, this will permit it to have a geopolitical presence in the Mediterranean thanks to its solid links with the Assad government. Israel in turn is trying to create an intermediate zone to prevent the creation of this corridor. Iran is fighting on Assad’s side, together with Hezbollah and Russia, to realize this strategic objective.

Israel, for its part, is leading air attacks against targets of Hezbollah on Syrian territory, while it uses its alliances with the United States, the Kurds and Sunni Arabs to prevent a “Shiite corridor” being created. At an inferior level, war is being waged on two battle fields: • One is in Iraq where the United States, the Kurds and the Iraqi army (supported by the Iranians) are fighting against the so-called Islamic State (IS). • The other battlefield is Syrian territory where matters are complicated. Russia, Syria and Iran are fighting on three fronts: one against IS; another against the Syrian opposition, and a third against the Al-Nusra Front (a branch of Al-Quaeda).

At the same time, the United States is supporting the Kurds and the Syrian Democratic Forces in their fight against IS, which has become a race for whoever —out of the United States or Russia — will control most of the territories of the oil reserves in Eastern Syria. At the same time, the United States continues to support a Syrian opposition party in the South and the South East of the country against the Assad government, the Hezbollah and the Iranians, all while preparing operations against the al-Nusra Front in the Syrian region of Idlib.

All that’s left out of this tapestry is Turkey whose policy has collapsed like a house of cards, when it switched from supporting the Syrian opposition (along with the United States and Israel) to allying itself to IS, to which it returned against the Kurds. And when the Kurds crushed IS, Erdogan oriented himself to whichever party was against the Kurds.

We have already said it: the situation is so complicated that it would be necessary to organize a seminar complete with maps to understand exactly what is happening. However, you must note the following elements: Turkey is in a difficult situation in its attempt to find allies here and there, in order to change the evolution of the Kurdish question that we announced at the beginning of this article.

The voice of logic, but also the Kurds of Turkey, millions of Erdogan’s voters and the AKP, are telling him not to choose a military operation against the Kurds in Kurdistan on the road to independence. Washington repeats this message.

Nevertheless, since anger and desperation are poor advisors, let us be ready, because if, despite these warnings, Turkey invades the Iraqi Kurdistan and the Afrin canton, then we will have a war and no-one knows how it will end.