International Partnership against Impunity for the Use of Chemical Weapons

Note: According to a diplomatic telegram from Benjamin Norman to the Foreign Office, a "Small Group" secretly met in Paris on the sidelines of this summit. It included five delegations: Saudi Arabia, France, Jordan (which did not officially attend the Conference on impunity), the United Kingdom and the United States. Its objective was the partition of Syria, the sabotage of the Sochi consensus, the framing of Turkey and instructions to the UN Special Representative Staffan de Mistura 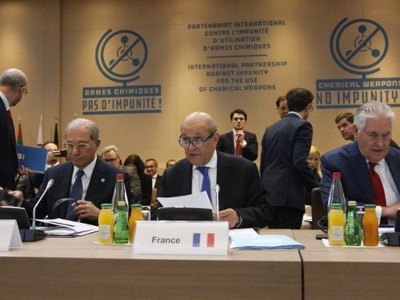 We, the Foreign Ministers of Australia, Belgium, Canada, Côte d’Ivoire, Czech Republic, France, Germany, Italy, Japan, Kuwait, Morocco, the Netherlands, Peru, Poland, Republic of Korea, Senegal, Spain, Sweden, Switzerland, Tunisia, Turkey, the United Kingdom, the United States of America and Ukraine, gathered in Paris on 23rd January 2018, reaffirm our condemnation in the strongest possible terms of the use of chemical weapons by anyone under any circumstance, emphasizing that all uses of chemical weapons anywhere, at any time, by anyone, under any circumstances are unacceptable, and contravenes international law.

We therefore reiterate our strong support for the Convention on the Prohibition of the Development, Production, Stockpiling and Use of Chemical Weapons and on their Destruction, and call upon all States to ratify or accede to and fully implement the Convention without delay. We pledge our unequivocal support to the work of the Organization for the Prohibition of Chemical Weapons (OPCW), which was awarded the Nobel Peace Prize for 2013 for its extensive efforts to eliminate chemical weapons. We also reaffirm the importance of full respect for the 1925 Geneva Protocol for the Prohibition of the Use in War of Asphyxiating, Poisonous or other Gases, and of Bacteriological Methods of Warfare; with the Geneva Conventions including their Additional Protocols ; with UN Security Resolutions (UNSCRs) 2314 (2016), 2235 and 2209 (2015), 2118 (2013), and 1540 (2004); with UNGA resolution A/72/43 (2017); as well as with Human Rights Council (HRC) Resolution S-17/1 (2011).

In this context, we solemnly deplore the fact that such a general and universal prohibition of the use of chemical weapons has been seriously undermined in recent years, as documented extensively through the exemplary reports of the OPCW Fact-Finding Mission (FFM) and the OPCW-UN Joint Investigative Mechanism (JIM); the findings of the OPCW Declaration Assessment Team (DAT); as well as the testimonies gathered by the HRC Independent International Commission of Inquiry on the Syrian Arab Republic. We condemn in the strongest possible terms the use of chemical weapons by the Syrian Arab Republic, as reported by the JIM, which violates the Convention, UN Security Council Resolution 2118 (2013), and relevant decisions of the OPCW Executive Council, as well as the use of chemical weapons by the so-called Islamic State of Iraq and Syria and Levant (ISIL) in contravention of well-established international standards and norms against such use.

We, the Foreign Ministers in support of this political Declaration of Principles, solemnly reaffirm today our common determination to support all relevant mechanisms including the International Impartial Independent Mechanism investigating Serious Crimes in Syria.

We therefore hereby announce the establishment of an International Partnership against Impunity for the Use of Chemical Weapons and consistent with international law and our respective national laws, regulations and policies commit to the following :

Collect, compile, retain, and preserve relevant information to support efforts to hold accountable those responsible for the proliferation or use of chemical weapons;

Facilitate the sharing of such information, , with participating States, and international, or regional organisation as appropriate, so that those responsible may be brought to justice;

Use relevant mechanisms to designate individuals, entities, groups and governments involved in the proliferation or use of chemical weapons for sanctions, as appropriate;

Publicize the names of individuals, entities, groups or governments placed under sanctions for their involvement in the proliferation or use of chemical weapons through a dedicated website;

Strengthen the capacity of Participating States, through national and supranational measures, to hold accountable those involved in the use of chemical weapons, including by enhancing the legal and operational capabilities of States to identify and sanction or prosecute individuals and entities involved in the proliferation or use of chemical weapons;

Support, where appropriate, common positions in existing fora regarding the use of chemical weapons, for example the OPCW Executive Council and the UN Security Council and General Assembly.

We invite all States that share our grave concerns to support and join this initiative in order to protect and reinforce the international standards and norms against the use of chemical weapons, to promote, encourage and assist their enforcement, give all necessary support to the Organization for the Prohibition of Chemical Weapons and the United Nations to fully carry out their mandates in this respect, and to deter any future use of such weapons.

Source : “International Partnership against Impunity for the Use of Chemical Weapons”, Voltaire Network, 23 January 2018, www.voltairenet.org/article199478.html

Source : “International Partnership against Impunity for the Use of Chemical Weapons”, Voltaire Network, 23 January 2018, www.voltairenet.org/article199478.html