Nato and nukes are not electoral themes 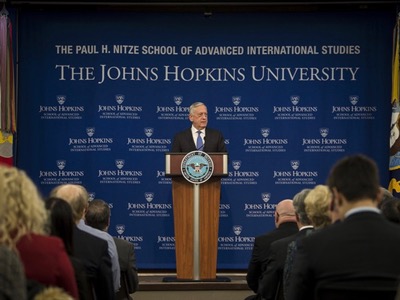 During the election period the Italian Government remains in charge only for the «handling of current affairs». Nevertheless it is about to take on other binding commitments in NATO on behalf of Italy.

These commitments will be officialized in the North Atlantic Council, taking place in Brussels on February14-15 at a defense ministers’ level. (Roberta Pinotti for Italy).

The agenda has not yet been communicated. But it is already written in the «National Defense Strategy 2018», that the US Defense Secretary Jim Mattis released on January 19 [1]. The Pentagon report is top secret this year, unlike the previous ones. Only a summary has been published, enough to make us understand what is going to prepare in Europe.

Accusing Russia of “violating the borders of nearby nations” and “ insisting on the veto power over the decisions of its neighbors», the US report states: «The surest way to prevent war is to be prepared to win one». Therefore it is a call on the European allies to «fulfill their commitments to increase de-fense spending to bolster NATO». Italy has already committed in NATO to bring military spending from the current approximately 70 million euro a day to about 100 million euro a day.

No one, however, talks about it in the electoral debate. As they do not mention the Italian contingent deployed in Latvia near the Russian territory, nor the Italian fighters, Eurofighter Typhoon, deployed in Estonia since January 10, a ten minute flight from St. Petersburg. The motivation is to protect the Baltic countries from «Russian aggression».

Silence shades the fact that Italy took over the command of the land component of NATO Response Force, projectable anywhere in the world «under the command of the Supreme Commander of the Allied Forces in Europe» on January 10, always appointed by the President of the United States.

The news of the Italian Navy receiving the first short takeoff and vertical landing fighter, F-35B, on January 26 is ignored. The F-35B personnel will be trained at the Beaufort base of the Marines in South Carolina.

In this framework the question of the new B61-12 nuclear bombs is not raised. The Pentagon will start to deploy the bombs on the Italian territory in 2020 replacing the current B-61. The Pentagon will set our country on the front line in the increasingly dangerous nuclear confrontation with Russia.

In order to break the cloak of silence on these fundamental issues we should ask the candidates in the parliamentary elections at public meetings, social media and radio-television programs two precise questions (as proposed by the No-War No-Nato Committee): «Are you in favor of Italy’s exit from NATO? Are you in favor of the immediate removal of US nuclear weapons from Italy? Answer Yes or No, possibly motivating the reason of your choice».

A third question should be asked to the 243 members of Parliament (among whom the candidate prime minister Luigi Di Maio stands out), signatories of the Ican commitment to have Italy join the UN Treaty on the prohibition of nuclear weapons: «In accordance with the commitment you signed, will you commit yourself, in the next legislature, to the immediate removal from Italy of US B-61 nuclear bombs, which already violate the Non-proliferation Treaty, and to the non-installation of the B61-12 and other nuclear weapons?».