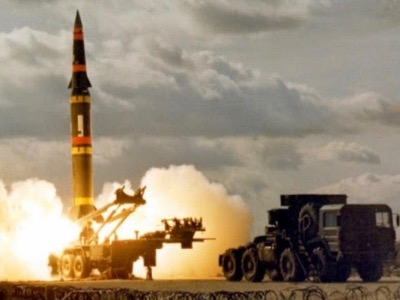 The plan was announced three years ago, during the Obama administration, when Pentagon officials declared: "In front of Russian aggression, the United States is considering the deployment of ground-based missiles in Europe" [1].

Now, with the Trump administration, the plan is officially confirmed. In the 2018 fiscal year the Congress of the United States authorized the financing of "a program of research and development of a ground-based mobile Cruise missile". It is a nuclear missile with an intermediate range (between 500 and 5500 km), similar to the 112 Cruise nuclear missiles deployed by the US in Comiso in the 1980s.

They were eliminated, along with the Pershing 2 ballistic missiles deployed by the US in Germany and the Soviet SS-20 deployed in the USSR, by the Treaty on Intermediate Nuclear Forces (INF), stipulated in 1987. It prohibits the deployment of ground-based missiles with a range between 500 and 5500 km.

As the US / NATO escalation continues, the deployment of such missiles in Europe is increasingly likely.

Meanwhile, in early February, Ukraine tested a ground-based intermediate-range missile, which was certainly produced with US assistance.

The new US nuclear missiles - much more precise and faster than the Cruise missiles of the Eighties - would be deployed in Italy and probably in Eastern countries too, adding to the B61-12 nuclear bombs that US will deploy in Italy and other countries since 2020. In Italy, the new Cruise missiles would probably again be positioned in Sicily, although not necessarily in Comiso. On the island there are two US installations of primary strategic importance.

The MUOS ground station of Niscemi, one of the four on a world scale (2 in the US, 1 in Australia and 1 in Sicily) of the satellite communications system that connects all US forces, even nuclear, anywhere of the world they are.

JTAGS, a satellite reception and transmission station for the US «anti-missile shield», which is about to become operational in Sigonella. It is one of five worldwide (the others are in the United States, Saudi Arabia, South Korea and Japan). The station, which is transportable, is used not only for anti-missile defense but also for attack operations, launched from forward-deployed bases such as those in Italy.

In the “Nuclear Posture Review 2018" the Pentagon declares: "The United States commit nuclear weapons forward-deployed to Europe, to the defense of NATO. These forces provide an essential political and military link between Euro-pe and North America".