Joint Statement on the “Resolute Support Mission” in Afghanistan 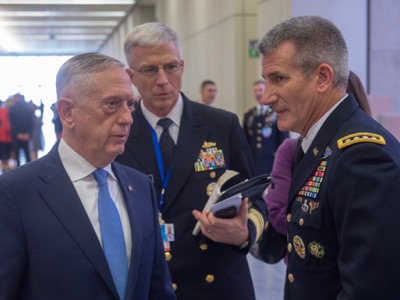 We, the Heads of State and Government of the nations contributing to the Resolute Support Mission, and the President of the Government of the Islamic Republic of Afghanistan, met today in Brussels to reaffirm our shared commitment to Afghanistan’s long-term security and stability. The people of Afghanistan demand peace and we are encouraged by the momentum building in that direction. We remain united in our commitment to help Afghanistan attain it. We pay tribute to the sacrifice and resilience of the Afghan people who have wanted peace for many years, and to the men and women serving in the Afghan National Defence and Security Forces1 and in the Resolute Support Mission. We honour all those who have lost their lives or have been wounded in support of a better future for Afghanistan that is free from terrorism.

Our shared aim remains a stable and secure Afghanistan that will never again serve as a safe haven for terrorists who threaten our shared security. Allies and Operational Partners reaffirm their commitment to the Resolute Support Mission, which trains, advises and assists the Afghan forces at the invitation of the Afghan government and with the support of the International Community as noted in UN Security Council Resolution 2189. Effective, professional, and self-sustaining Afghan forces will be better able to provide security for the country, create the conditions for a negotiated resolution of the conflict through an Afghan-led and Afghan-owned peace process, and demonstrate to the Taliban that it cannot prevail through force. We welcome the progress the Afghan security institutions are making as a result of Resolute Support’s capacity-building efforts, and the Afghan-led institutional reforms which are resulting in strengthened professionalism and increased effectiveness on the battlefield. We reiterate our support for the Afghan National Defence and Security Forces Roadmap.

A political solution to the conflict with the Taliban, based on national consensus, will be essential in order to achieve sustainable stability and security. NATO Allies and Operational Partners welcome the Afghan government’s unprecedented offer of unconditional peace talks to the Taliban. We fully support the Afghan government’s aim of reaching an inclusive peace agreement with the Taliban, and note with particular appreciation the outcomes of the Kabul Process for Peace and Security Cooperation conference in Afghanistan on 28 February, and the Tashkent Conference on Afghanistan held on 26-27 March. We also commend the Afghan government’s commitment to demonstrate the benefits of peace, and its determination to advance the peace process and reduce violence through its announcement of a unilateral cease-fire in June. We note that the Taliban participated in the Eid al-Fitr cease-fire. Their leadership’s rejection of the extension proposed by the Afghan government will only result in harm to innocent Afghan citizens.

We reiterate our call to the Taliban to engage credibly in the Afghan-led and Afghan-owned peace process and stress that this is the only pathway to a sustainable resolution of the conflict. NATO Allies and Operational Partners will respect and support a negotiated and durable political settlement led by Afghans which ends violence, cuts ties to terrorism and protects the human rights of all Afghan citizens, notably those of women and children. We also support the Afghan government’s intention to address all contested issues between the parties, including those relating to the future military role of the international community in Afghanistan.

NATO Allies and Operational Partners strongly support the Afghan government’s determination to eliminate the threat of terrorism in all its forms, including that posed by ISIS/Daesh affiliates and Al-Qaeda in Afghanistan. The improvements to the Afghan forces will bolster their ability to combat those terrorist groups that pose a threat to us all.

We reiterate the importance of good and inclusive governance, institution building, as well as social and economic development. The upcoming Geneva ministerial conference on Afghanistan in November 2018 will be an important opportunity to review the progress achieved, particularly the Afghan government’s commitment to accountability and reforms, and to underscore the International Community’s continued commitment to development assistance.

A stable Afghanistan is in our interest and that of the entire region. Regional actors have a significant role to play in achieving peace and stabilisation in Afghanistan by fully supporting a negotiated political solution, by not lending any form of support to the insurgency, by improving conditions for Afghan economic development, and by working with the Afghan government to combat terrorism. We encourage Pakistan to continue to act on its stated support for a political solution to the conflict, to close terrorist sanctuaries and to work to prevent terrorist financial flows and cross-border attacks, including by working with its neighbours. In this regard, we welcome the finalisation of the Afghanistan-Pakistan Action Plan for Peace and Solidarity. We call on regional actors to contribute to regional stability by fully supporting an Afghan-led and Afghan-owned peace process. NATO Allies and Partners will continue to engage constructively at the regional level.

We welcome Qatar and the United Arab Emirates who are joining the Resolute Support Mission and we encourage other interested countries to contribute. This reflects the broad and continuing support by the International Community for Afghanistan’s stability, also including through the International Contact Group.

NATO Allies and Operational Partners have increased force-levels to maximise the ability to train, advise and assist the Afghan forces, and we announce today that we have committed to:

sustain the non-combat Resolute Support Mission that delivers training, advice and assistance to the Afghan security institutions and forces until conditions indicate a change in the mission is appropriate;

extend financial sustainment of the Afghan forces through 2024; and

make further progress on developing our political and practical partnership with Afghanistan, including through the Enduring Partnership.

For its part Afghanistan, with the continued support of NATO Allies and Operational Partners, building on progress already made, commits to:

further strengthen the Afghan security institutions and forces, ensuring that they: provide security for the Afghan people; operate under effective civilian leadership complying in full with international humanitarian law; respect human rights; and act in accordance with the Afghan constitution and the rule of law;

continue to combat corruption, including in security structures as described in the roadmap as well as other government structures;

organize and hold credible, free, fair, and inclusive parliamentary elections in 2018 and presidential elections in 2019 and vigorously address remaining organizational challenges with full respect to the independence of electoral institutions;

steadily increase its share of funding for the Afghan forces in furtherance of the commitments made at the Chicago Summit with the aim of attaining self-sufficiency, while recognizing that this will take some time to achieve;

build on recent efforts to empower women to participate fully in all aspects of Afghan society, including in the Afghan forces, as well as in political processes, including peace and reconciliation, and abide by commitments to fully implement Afghanistan’s National Action Plan on UNSCR 1325;

take further steps to protect children from the damaging effects of armed conflict and from violations of their rights, as required by UNSCR 1612 and other relevant UN Security Council resolutions, as well as ensuring the protection of civilians.

Further progress on the commitments outlined above will curb violence, improve economic prospects, help set social, security and economic conditions for long-term stability and have an important impact on migration. We are encouraged by progress in Afghanistan and we will not waver in our support to the development of Afghan forces that can keep the country stable, secure, and safe from the threat of terrorism. As we do that work, we look forward to the initiation of an inclusive, negotiated peace agreement with the Taliban that will be a victory for all Afghans.