The new Russian system of integrated management of data on the Syrian battlefield, is not uniquely conceived to prevent Israeli aggressions. It also makes it impossible for the United States and France to provide air support for their illegal bases in Syria. This is why, anticipating defeat, Ambassador James Jeffrey has called for US occupation forces to be withdrawn. 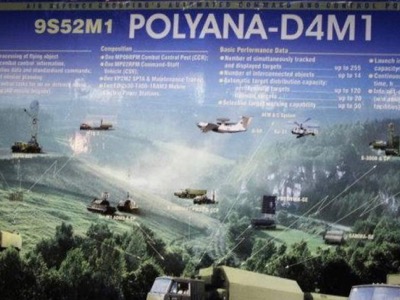 Under international law, the defense of the Syrian territory, even the parts occupied by anti-government, separatist terrorist groups, is the responsibility of the Syrian government. The same applies to Syria’s territorial waters and its air space. Russia has been invited by the legitimate government of Syria to support the Syrian army in its fight against terrorists. But, even in this context, Russia is not arrogating to itself the right to replace the Syrian government as the holder of the sovereign right to defend its territory and its air space.

In the past, going beyond the limits set by international rules and UN decisions, the USA and its allies (NATO in particular), have proceeded to a military occupation of Iraq and Afghanistan, and have imposed a no-fly zone over Libya and Yugoslavia.

In contrast, the Russian contingency in Syria is not an occupation force and accordingly, has not received from the Russian President, the mandate to occupy the Syrian territory or to create a no-fly zone over the entire country, even though it has the operational capacity to do so.

The agreement that Russia concluded with the United States and Israel to avoid accidents which implies the accidental destruction of its planes, is limited to air spaces situated around the air base at Hmeymim, the Russian installations in the governorate of Latakia and the naval base near Tartus, including the installations located around the port of Tartus. This agreement has been respected and this is evidenced by the Russians never launching their AA missiles, except against the drones of the armed Islamists that threaten the air base at Hmeymim.

On 17 September 2018 when the Russian airplane IL-20 was brought down, the Israeli F-16s were very close to violating the agreement with Russia by targeting objects situated in the prohibited area, only 10 km from the north of the Hyeymim air base. Despite this, the Israeli planes were not destroyed.

The terrain situated on the Syrian-Lebanese border is mountainous so that radar detection of the Syrian AA defense and the direction of the Syrian AA missiles is impossible for targets flying at a low altitude in Lebanon or near the coast of Lebanon. Lebanon does not have any AA missiles. This is because its government depends on Saudi Arabia to fund its army. Furthermore, Saudi Arabia was the main provider of funding, new recruits, arms, weapons and training for the terrorists fighting against the Syrian national army.

Either Saudi Arabia has no interest in arming Lebanon with its AA missiles prohibiting Israeli planes from flying over Lebanese territory or it has a very close political and military cooperation with Israel. In any event, Israel has often used the Lebanese air space to attack targets in Syria.

On the eastern border, Northern Syria and the territory occupied by Daesh (including the governorate of Raqqa), there are no Syrian radar stations. The area is occupied by separatist Kurds and the Syrian Democratic Forces (SDF), supported and armed by the US.

Russia has deployed a radar plane A-50U (similar to the US AWACS) in Syria. This plane is maintained in the area of patrol for 9 hours and simultaneously pursues 150 air targets over an area with a radius of 350 km, without being affected by any type of relief. Up until now, the coordinates of these targets have not been transmitted to the Syrian terrestrial radars because the latter do not have a system of automatized management capable of communicating with the A-50U (the Russian radar plane).

However no arm is infallible and Israel, following its custom, will seek and will find flaws in the system Polyana D4M1 that has been set up by the Syrian army. All the more since, following the collapse of the Soviet Union, a vast number of Jews emigrated to Israel. Some of them were renowned scientists in the field of Soviet weapons and their integration into industry and defence has brought a substantial advantage to Israel.

These Israeli experts, originally from the USSR, experts on Soviet techniques, knew that on 17 Sept 2018, the radar for surveillance of the air space and the radar for guiding the S200 AA missiles were situated near the launching ramp that is more than 100 km from the Russian plane. At this distance, the radar space of separation between the Russian plane and the false echoes of the F16 planes created by very weak systems of disturbance, is barely perceptible. That is, the systems superimpose, one on the other. These experts also know that if the Syrians respond to the attack, the S-200 missile would bring down the Russian reconnaissance plane and not the Israeli combat planes. Who has the most to lose?

Until now, the Israeli air force raids in Syria have not caused great losses that could change the outcome of the battle. For the Israelis, it was more about projecting an image of prestige, to show international public opinion that they could strike military targets in Syria without Russia intervening.

Astonishingly, Israel is not the big loser of the implementation of the automatized management of the Syrian airspace (which now includes the S-300 systems). Israel can avoid confronting the AA Syrian Defence, renounce attacking several targets in Syria. It can also, to maintain its image, strike by means other than the air force, the zones deprived of military targets after giving prior notice to the Russians.

The biggest loser is the US. Both in the territories occupied by the Kurds of the SDF, and also at the border with Jordan, the US has illegally created military bases. Syria is a founder member state of the UN. In contrast to the Russian soldiers, the status of the US, British, French and Turkish is that of the aggressor, for they are acting in Syria either on the side of the groups fighting against the government or the independent troops. The US fighter planes that bought down the Syrian airplanes above Syrian territory on the pretext that they were threatening US troops were acting on Syrian territory on the side of anti-government groups.

In the US military bases, there are some members of the Special operational forces, that is to say, a light infantry without the support of the artillery. These bases will not be able to resist a single attack on the soil by the Syrian army supported by the Air Force. If the US realize that its Air Force will not be able to pass through the AA Syrian barrage without suffering heavy losses, then any air intervention will become inopportune. When we speak of the barrage of the Syrian AA, we are referring to three things: a/the automatized system for the management of the Syrian air space; b/the systems of AA missiles and c/the equipment of interference: Krasukha-4 and R-330ZH Zhitel. The latter annihilates the command centres for the management of the fighter air force (AWACS), the systems for navigation, the centres for controlling the fire and guiding arms on board US fighter planes. 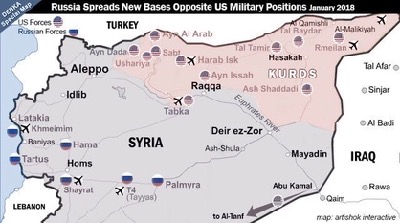 The only solution left on the table, will be for the Pentagon to withdraw its troops from Syrian territory.