President Recep Tayyip Erdoğan reacted to the impending removal of the US nuclear arsenal from his soil by announcing Turkey’s intention to build one of its own. This is both legitimate in the face of the Israeli nuclear threat and a step in the worst direction. 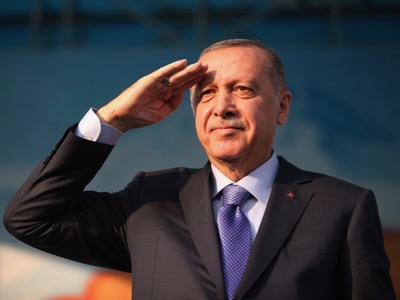 “Some countries have nuclear missiles, but the West insists that we cannot have them. This is unacceptable”: this statement by President Erdogan reveals that the crisis goes beyond that which began with the Turkish offensive in Syria. In Turkey, during the Cold War, the United States deployed nuclear weapons against the Soviet Union. In 1962, in the agreements with the USSR for the resolution of the Cuban missile crisis, President Kennedy promised to remove these weapons from Turkey, but this was not done.

After the end of the Cold War, about 50 U.S. B61 nuclear bombs (the same as those deployed in Italy at Aviano and Ghedi), directed mainly against Russia, remained in Turkey, at the Incirlik air base. In this way, both the United States and Turkey are in violation of the Non-Proliferation Treaty. Within the framework of NATO, Turkish pilots are trained (like the Italian pilots of the Ghedi base) to attack with B61 nuclear bombs under U.S. command. Soon, the B61s will be replaced by the Pentagon also in Turkey (as will be done in Italy and other European countries) with the new B61-12 nuclear bombs, also directed mainly against Russia.

In the meantime, however, following the Turkish purchase of Russian anti-aircraft missiles S-400, the United States removed Turkey from the program of the F-35, which is the main carrier of the B61-12. Turkey was supposed to have purchased 100 F-35 aircraft, of which it was a co-producer. “The F-35 — declared a White House spokesperson — cannot coexist with the S-400 anti-aircraft system, which can be used to learn the capabilities of the fighter.” (White House.gov, July 17) That is, Russia can use what it learns through the S-400 system to strengthen the defences against the F-35. By supplying Ankara with the S-400 anti-aircraft missiles, Moscow has managed to prevent the U.S. (at least for now) from deploying 100 F-35s on Turkish territory ready to attack with the new U.S. B61-12 nuclear bombs.

At this point, it seems probable that, among the options considered in Washington, there is that of the transfer of U.S. nuclear weapons from Turkey to another country deemed more reliable. According to the authoritative Bulletin of Atomic Scientists (USA − Oct. 17), “the Aviano air base [in northeastern Italy] may be the best European option from a political point of view, but it probably does not have enough space to receive all of Incirlik’s nuclear weapons.” Space could, however, be provided, given that renovation work has already begun in Aviano to accommodate the B61-12 nuclear bombs.

Against this background there is Erdogan’s declaration that, using the threatening presence of the Israeli nuclear arsenal as his motive, Turkey intends to have its own nuclear weapons.

Turkey has started the construction of its own nuclear electronics industry, purchasing some reactors from Russia, Japan, France and China. According to some sources, Turkey could have already procured, on the “black nuclear market,” centrifuges for uranium enrichment. Erdogan’s announcement that Turkey wants to become a nuclear power, interpreted by some as a bluff to give his regime more weight in NATO, should not be underestimated.

Erdogan’s announcement uncovers what is generally hidden in the media debate: the fact that, in the turbulent situation caused by the policies of war, the possession of nuclear weapons plays an increasingly important role, prompting those who do not own them to obtain them.