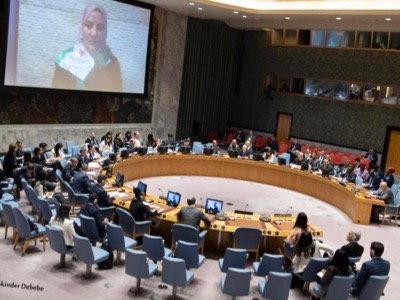 On instructions from my Government, I transmit the present identical letters in order to raise an important issue, namely the lack of balance shown by the current President of the Security Council, the Permanent Representative of Belgium, when chairing Security Council meetings on the situation in the Syrian Arab Republic and on counter-terrorism.

We have noticed with some concern and suspicion that the current President of the Security Council has failed to show impartiality and objectivity when chairing those meetings. His approach has exacerbated the division and polarization of the Council and deflected the meetings concerning the political and humanitarian situation in my country, Syria, from their genuine subject matter.

My Government sees no justification for the President of the Security Council to take advantage of his powers in order to give precedence to the views held by his Government and those of other members of the Council. Yet he has done just that, by inviting individuals who have no credentials with the United Nations or the international community, and no objective standing, to give briefings for the sole purpose of attacking the Government of the Syrian Arab Republic and its allies in the war against terrorism, and to make baseless accusations against those parties. The effect is to weaken the reputation and function of the Security Council, which is the main organ responsible for maintaining international peace and security.

Like others before him, the President of the Security Council has extended invitations to members of opposition groups so that they can shabbily attack the Syrian Government and distort its position and that of its allies. Such conduct runs counter to the role of the United Nations. It is an open attempt to slander a State Member of the Organization by abusing the prerogatives of the President of the Security Council to promote the views of certain parties.

We were very surprised at what happened recently at the meeting held on Friday, 7 February 2020 (S/PV.8716), the purpose of which was to discuss the tenth report of the Secretary-General on the threat posed by ISIL (Da‘esh) to international peace and security and the range of United Nations efforts in support of Member States in countering the threat (S/2020/95). At that meeting, the President of the Council failed to show even a modicum of fairness or objectivity. He deflected the meeting from its original purpose by giving the floor to a woman living in Turkey, under the pretext that she would describe her experience under the control of Islamic State in Iraq and the Levant (ISIL) in the Syrian city of Raqqah.

What actually happened was that the woman appeared by video link displaying the insignia of opposition terrorist groups. In her so-called briefing, she deviated from the sole purpose of the meeting, namely countering ISIL, and attacked the Syrian Government and its allies for violating international law. She described what was done in Raqqah by the United States-led international coalition as victory and liberation. Everybody knows, however, that the forces of that illegal coalition destroyed the city, and that the bodies of the victims have been buried under the rubble for years. Such has been the assessment of the specialized internal committees established by the Secretary-General.

Owing to the conduct of the President of the Security Council, the content of the report of the Secretary-General was misrepresented. The meeting departed from its original subject, namely, combating terrorism and Al-Qaida, and its value was cheapened. What is more, the President of the Security Council disregarded the fact that the United Nations is an organization of Member States. As a result, during his time as President, he has failed to transcend his country’s antagonistic stance towards Syria and fallen into the trap of bias and partiality.

The Syrian Arab Republic has seen documents from within the Security Council confirming that its members agreed, at their recent retreat, to refrain from misusing the Council’s meetings and behaving in such a way as to raise tension among members, bearing in mind the political divergences between the Governments of the members.

We therefore call on all parties in the Security Council to adhere to the standards of professionalism and neutrality, to respect the status and reputation of the Security Council, and to refrain from making it a media platform and thereby setting a dangerous precedent that would undermine its mandate to maintain international peace and security.

Source : “The neutrality of the Belgian presidency of the Security Council in question”, by Bashar Ja’afari, Voltaire Network, 13 February 2020, www.voltairenet.org/article209278.html

Source: “The neutrality of the Belgian presidency of the Security Council in question” , by Bashar Ja’afari , Voltaire Network , 13 February 2020, www.voltairenet.org/article209278.html