Venezuela reached separate agreements with Brazil and with Argentina to invest in refineries in the two respective countries. Venezuela’s President Chavez announced the plans were during a summit of the Community of South American Nations (CSN), which took place last week and was attended by the leaders of Chile, Bolivia, Peru, Paraguay, Ecuador, Venezuela, Brazil, and Argentina. 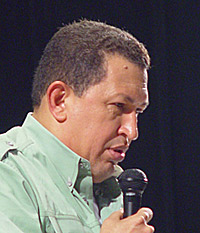 Other projects that Brazil and Venezuela agreed to pursue include Brazil’s participation in the production of natural gas, off the Venezuelan coast, in the area known as Gran Mariscal Sure. This project would involve an investment of $2.2 billion to exploit a field that is said to hold 4 TCF (trillion cubic feet) of natural gas. In a third project with Brazil, Venezuela will engage in a joint venture to produce 150,000 barrels of extra-heavy crude per day from the Orinoco Oil Belt.

The agreement with Argentina involves the joint purchase of an existing refinery in Argentina, called La Rhasa, which processes 8,000 barrels of crude per day. Rafael Ramirez, the president of Venezuela’s state oil company PDVSA, which will make the purchase, said that PDVSA would probably amplify the refinery’s capacity. This refinery would supply gas stations that PDVSA intends to purchase in Argentina and Uruguay.

These investment agreements are part of PDVSA’s and the Venezuelan government’s larger strategy to focus on expanding its markets in South America, so as to diversify its export market. Currently Venezuela’s primary export market is the United States, which purchases as much as 80% of Venezuela’s oil exports.

In addition, Chavez and Ramirez have said that energy integration is a first step towards deeper economic and political integration of Latin America, so as to counter U.S. power in the Western hemisphere. “We are convinced that in the face of global problems that we have as a result of a globalized economy, with globalized financial mechanisms, there are no national responses,” said Ramirez during the meeting.

Part of this strategy has been the creation of regional oil agreements, known as Petrocaribe, which encompasses the Caribbean nations, Petrosur, which encompasses the southern cone of Argentina, Brazil, and Uruguay, and Petroandina, encompassing Colombia, Ecuador, and Peru. Together these regional associations are to eventually form Petroamerica, covering all of Latin America.

These associations have meant the supply of oil to various countries at preferential financing terms and the investment in large-scale infrastructure projects, such as pipelines and refineries throughout Latin America.