NATO is engaged in combating terrorism in Afghanistan (with a UN mandate) and in the Mediterranean (without UN mandate). These operations include tracking down terrorist financing and therefore drug trafficking as well. Yet, Afghanistan has become the largest producer of heroin and the drug is delivered to Western Europe via the Mediterranean, of which NATO has yet to seize a single gram. According to Oriental Review journal, the facts contradict the discourse, concluding that NATO itself is responsible for organizing and securing the drug trafficking.

We all are aware of the basic frameworks of the US response to barbaric 9/11 terrorist attacks. The Bush’s administration and NATO launched unprecedented media, diplomatic and military campaigns aimed to suppress the adversary inside its haunt in Afghanistan. But few remember that the US Operation Enduring Freedom and NATO’s International Security Assistance Force weren’t the only military frameworks for multilateral rebuff to Al-Qaeda. At the same time the United States announced an unprecedented maritime operation named Active Endeavour. The latter is known less as it was based not on the UN Resolution 1368, but notorious article 5 of the North Atlantic Treaty stipulating ‘collective self-defense’.

Immediately after all the operations started gaining momentum. But while the expediency of the Enduring Freedom and ISAF couldn’t be seriously challenged as the need to fight Taliban in Afghanistan was quite clear at that time, the mission and results of the maritime initiative are not so obvious. Since the very beginning it was announced that the main objective of the operation was to fight terrorism and other illegal activities on maritime communications. But they suddenly started monitoring… only Mediterranean trade routes.

In practical terms the monitoring routine looks like that: a NATO warship or a group of such plies the Mediterranean and the strait of Gibraltar. They check all neighboring merchant vessels through the special database which includes a black list of ‘suspect ships’. If they detect a ship from the black list they board it to inspect documentation and cargo in search of illegal migrants, elements of the weapons of mass destruction, narcotics etc – everything relevant to combating terrorism.

Everything is seemingly Ok. But let’s recall where the main heroin supply routes from the NATO-dominated Afghanistan to Europe lie.

1. Land heroin route (through Turkey,Bulgaria, Kosovo or Bosnia). To facilitate the entrance into the Schengen area and avoid excessive formalities, the heroin packs, often declared as ‘perishable Turkish oranges’, are transported by TIR-labeled juggernauts to clandestine laboratories in the south of France. Typical blue-colored containers with acetyl oxide – one of the principle precursors for heroin refinement have the same destination.

2. Maritime heroin route lies via Mediterranean trade lines to the Corsica Island. The packs are being transshipped there to ferries and follow the voyage to Marseille absolutely unchecked. By the way, according to available intelligence, there are around 20 clandestine heroin refinement plants in the outskirts of Marseille.

Now to the main question: how many tons of heroin were intercepted on merchant vessels in Mediterranean during more than ten years (!) of the operation Active Endeavour? Correct answer: None!

Not a single gram! And we should take it for granted that every day hundreds of kilos of heroin are being shipped through NATO’s ‘area of responsibility’. Curiously enough the Joint Forces Command of the operation located in Naples(Italy) does not even collect such statistics! A couple of times a relevant question concerning such statistics caused confusion and embarrassment among the top admirals leading the operation. There is only one piece of statistics: in 2003-2009 155 merchant vessels were boarded and checked by NATO inspection teams. They did not find anything.

As we already know the methods applied by democrats against international terrorism in Afghanistan, we can’t help asking another question: why NATO is wasting stupendous resources on a purposeless operation? The answer is evident: both ISAF and Active Endeavour are perfectly complying with their real mission: to ensure total control over production, transportation and distribution of illegal drugs, critically important for the ‘global triumph of democracy’. 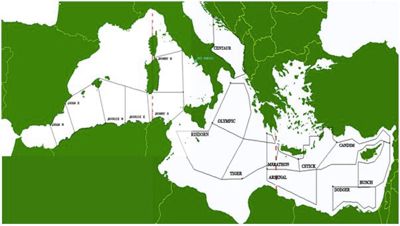 NATO’s Mediterranean maritime operation zone is divided into several patrol squares, each with specific code-name (see map 1). For an unknown reason a large part of the sea surface there is not monitored at all. It concerns first of all the very southern coast of France and major part of Adriatic and Tyrrhenian Sea off Italian coasts. At the same time the most patrolled squares are BUSCH and DODGER – which are exclusive economic zones of Syria and Egypt. The Suez channel is also being strictly monitored, firstly because of its strategic importance and secondly because that is the way to Iranian ports.

Perhaps these ‘black holes’ are thoroughly monitored by the airborne patrols, taking into account that the areas are very close to the US NAF Sigonella in Sicily where P-3 Orion aircrafts are dislocated? Let’s have a look on the square map for aviation (it differs from the maritime map). 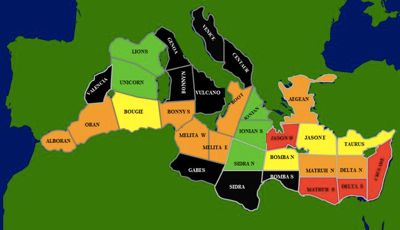 The squares where NATO aviation is not present are in black. So the maps are almost identical. US Orions patrol mostly central segment of the Mediterranean. It was caused not by intensive sea traffic, but because Automatic Identification System from the shore-based stations does not reach these places. If a sea-borne tracking station is not present nearby, the vast area would be left unmonitored. Such partial lack of control is unacceptable. This is why US aircrafts are taking off to patrol mostly central Mediterranean.

Such operations are aimed to control cargoes of geopolitical rivals rather than mythic terrorists. Those vessels really involved in the schemes of illegal drugs and weapons smuggling to Europe are obviously not present in the black lists of the NATO tactical units. When Russian and Ukrainian warships participated in Active Endeavour before 2008, they faced blatant restrictions in operations from NATO side. So-called NATO sister-ships imposed to each of them were strictly monitoring all activities and intentions of the aliens.

There is yet another dimension of this story. NATO’s ambitions in early 2000s were extended to Black Sea as well (perhaps caused by the fact that Romanian port of Constanta was another notable gate for Afghan heroin to Europe). In 2004 a twin operation named Black Sea Harmony was launched by Turkey. The standard operation procedure of the latter stipulates information exchange with the joint command of Active Endeavour. So the transparency of the Turkish straits and territorial waters to the international drug cartels is still an open issue.