And the economy of death flies on!

Nearly 17 million Americans, or 5.5 percent of the population, suffer from hunger and have gone at least one full day without eating during the last three months because of a lack of money. Another 33 million can only afford to buy low-quality food and suffer from nutritional imbalances. Indifferent to their needs, Washington has completely geared its economy towards arms manufacturing. This trend towards a war-driven economy, which began in 1995 under the Clinton administration, suddenly picked up speed after the 9/11 terrorist attacks with the Bush Jr. Administration, and has maintained the same pace under Obama’s watch. 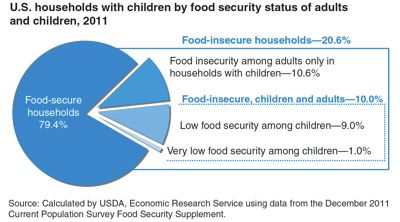 More than 50 million people, including 17 million children, are "food insecure", that is to say, without adequate food "for a lack of money or other resources." The data does not refer to a poor sub-Saharan African country, but to the country with the largest economy in the world: the United States of America, according to the U.S. Department of Agriculture (September 2012).

During the Bush administration (2001-2008), American citizens without proper food, who have to depend on food stamps and charitable organizations for their survival, rose from 33 to 49 million. During the Obama administration, their number has increased to more than 50 million, equivalent to 16.4% of the population, compared to 12.2% in 2001. Of these, about 17 million are in a state of "very low food security," in other words hunger.

They nevertheless have the satisfaction of living in a country whose "security" is guaranteed by a military spending which - according to the SIPRI - doubled during the Bush administration, and rose under Obama from 621 billion dollars in 2008 to over 711 in 2011. At a constant 2010 dollar value (i.e. net of inflation), military spending increased by 80% from 2001 to 2011. The real military expenditure of the United States, equivalent to 41% of global military spending, is actually even higher: when factoring in other items of a military nature (including 125 billion per year for retired military pay) it climbs to almost half of global spending. In this way, as stated in the 2012 Budget, the Pentagon can maintain "military forces ready to be deployed either in the current wars or potential future conflicts." And, at the same time, it can "invest in long-term scientific and technological innovation to ensure that the Nation has access to the best available defense systems in the world."

To this end, an expected 100 billion in savings are “reinvested in areas of high priority," starting with drones: a gliding unmanned aerial vehicle which fires its missiles against targes by remote control from over 10,000 km away.

Here, reality exceeds Hollywood science fiction. Lockheed Martin is developing a new drone for the special forces: to increase its autonomy, it will be fed while in flight by a ground laser beam. As for Northrop Grumman it has undertaken an even more audacious project: the drones, powered by nuclear energy, remain in uninterrupted flight, not for days but for months. Always at Northrop Grumman, they are developing a robotic glider aircraft carrier, the X-47B, which thanks to its programmed memory is able to take off, land and carry out its mission autonomously.

Given the enormous costs of these programs, the Pentagon has already drawn up a list of faithful allies to whom it can sell the new drones designed for robotic warfare. Undoubtedly Italy will be first in line, having already purchased from the U.S. firm General Atomics their latest UAV model, the MQ-9A Predator B. In future, Italy will also purchase the nuclear drone, which after taking off over the heads of the 50 million U.S. citizens in "food insecurity" conditions, will fly over the unemployed Italians (Translator’s note: plus the millions of other unemployed Europeans) who are occupying the factories slated to be shut down.

Will 7 million Iraqis be deprived of water this summer?