The next National Security Advisor of the United States, General Michael T. Flynn, has been successively lauded as one of the most brilliant intelligence officers of his generation, and then reviled as an Islamophobe and a torturer. In the meantime, he opposed President Barack Obama and joined the camp of candidate Donald Trump. 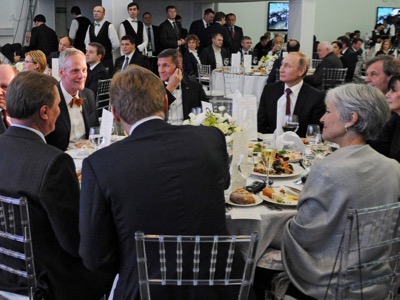 Last year, General Flynn was invited to the anniversary party of the international television channel «Russia Today». His participation was violently criticised by the White House, for whom this channel is an «organ of propaganda for Vladimir Putin» (sic).

With a load of bad faith, the Clintonian Press describes Michael T. Flynn, the next National Security Advisor of the United States, as an Islamophobe and a partisan of torture. What’s the truth behind all this?

Flynn is a Catholic of Irish origin, attached to the stability of his family. He is a dedicated sportsman, and practises both team and individual sports, but prefers sports of movement over sports of force.

Considered to be one of the most brilliant intelligence officers of his generation, commander of the Defense Intelligence Agency (DIA) from July 2012 to August 2014, he questioned the work methods of his service. According to Flynn, the systematic use of sophisticated technology does not compare with the quality of human intelligence, and the tendency to render reports in the form of well-illustrated exposés does not enable the understanding of complex situations. A written analysis is more efficient than pages of fine drawings and photos. Finally, the quality of the intelligence depends on a comparison with the reports of other anaylsts. It is therefore very important to co-operate and exchange with other national services and allied nations, contrary to US habits. All things considered, these are very classical positions, but in total contradiction with the habits and customs of his country.

Concerning jihadism, on which he has been concentrating for fifteen years, he has arrived at the conclusion that Islamism has nothing to do with religion, even though it uses its vocabulary and quotes the Quran - it is an exclusively political ideology. What is worse, but just as true, he affirms that the support from which the jihadists benefit in part of the Muslim population finds its roots in Islam itself. While he has not expressed a position on the Muslim religion, he has introduced into Donald Trump’s team the Lebanese professor Gabriel Sawma, the author of a work on the Syriac origins of the Quran, which leads to a very tolerant interpretation of Islam.

The clash between Michael Flynn on one hand and Hillary Clinton and Barack Obama on the other occurred in August 2012, during the circulation of a secret note concerning the jihadists in the Levant. In the part of the docupment which had been declassified, he observed that the jihadists were at war with the Syrian Arab Republic, and were supported by the tribal populations who lived in an area straddling Syria and Iraq. This situation could lead to the creation of an emirate in North-East Syria, which would correspond to the strategic interests of their sponsors - Saudi Arabia, Qatar and Turkey. He explained that he had written this document - just after the France re-launched the war against Syria – in an attempt to oppose the support by the Obama administration for the creation of Daesh.

Concerning torture, he has explained several times that his own declarations should not be interpreted as an encouragement to its generalisation. If he is fighting the jihadists because they torture and kill, they must understand that he will not dissociate himself from his companions in arms who have practised torture, and that he will not hesitate to torture and kill in his turn if necessary. But this is not his intention, and in Afghanistan, he intervened against this practise.

Donald Trump and US Intelligence