Donald Trump winds up “the” organization of US imperialism

Donald Trump has just undertaken the most important reform of the administrative structures in the United States for more than 69 years. He has just put an end to the imperial project and is reshaping his country into a State like any other.

Update (31 January 2017): in light of the indignant reactions on the part of the US ruling class, Donald Trump has announced through his spokesperson that this Memorandum would be amended - probably to authorize the Director of the CIA to have a permanent seat on the Council. 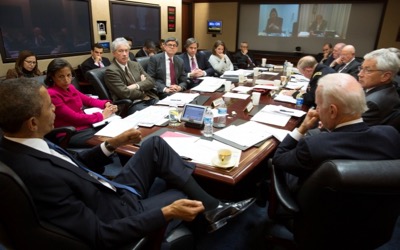 With a view to reshaping the system of governance established in 1947, President Trump has published a Memorandum on the Organization of the National Security Council and the Council of Homeland Security) [1].

The principle that had been applied till now was to deal with “National Security” under the joint authority of the White House, the Chief of Joint Military Forces and the CIA which was established in 1947.

From 1947 to 2001, the National Security Council was right at the heart of the Executive. The President shared power over it with [two other officials]: the Director of the CIA, (appointed by the President) and the Chief of Joint Military Forces chosen by his peers. Since 11 September 2001, the Council was in fact placed under the supervision of the “Government of continuity” of Raven Rock Mountain.

Hereafter, it will not be the norm for the Chief of Joint Military Forces to be represented at meetings but only when an item on the agenda requires his input. In addition, the CIA loses its place on the Council where it will eventually be represented by the National Director of Intelligence.

So, the CIA, which was till now an arm the President could use to lead covert operations, finally becomes an Intelligence Agency in the proper sense of the term. This means, that its mandate is to study international actors, to anticipate their actions and to advise the president.

The annual report on its activities indicates that in 2015, the Council ordered political assassinations in 135 countries.

During the transitional period, President Trump had solemnly declared that the United States would no longer organize any more regime changes as it had done or tried to do since 1989 by using Gene Sharp techniques.

Furthermore, President Trump has assigned a permanent seat to his chief strategist as well as his chief of staff.

The former Security Council Adviser, Susan Rice, has strongly reacted on her Tweeter account. Most of the former CIA directors have already entered the fray in protest.