Fake “made in USA” and lies “made in Italy” 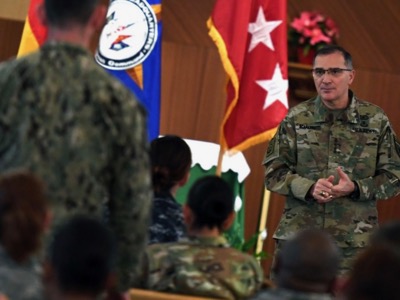 To motivate the 2003 war, the US accused Iraq of possessing weapons of mass destruction: Secretary of State Colin Powell presented to the UN a series of "evidences" that turned out to be false, as he himself had to admit in 2016.

Similar "evidences" are now presented to motivate the attack on Syria by the United States, Britain and France. On 14 April, General Kenneth McKenzie, Joint Staff Director of the Pentagon, presented a report, accompanied by satellite photos, on the Barzah Research and Development Center in Damascus, calling it "the heart of the Syrian chemical weapons program".

The Center, which was the main target, was attacked with 76 cruise missiles (57 Tomahawk launched from ships and submarines and 19 JASSM launched from aircraft). The target was destroyed, the general announced, bringing “the Syrian chemical weapons program back for years".

This time there is no need to wait thirteen years to confirm the falsity of the "evidence". A month before the attack, on March 13, the Organisation for the Prohibition of Chemical Weapons (OPCW) had officially announced the result of the second inspection, carried out at the Barzah Center in November 2017, and of the analysis of samples taken completed in February 2018: "The inspection team did not observe any activities inconsistent with obligations under the Convention" [1]. It is no coincidence that the Barzah Center was destroyed just before the OPCW inspectors arrived there for the third time.

Syria, a member of the OPCW, completed chemical disarmament in 2014, while Israel, which does not adhere to the Chemical Weapons Convention, is not subject to any control. But this fact is neglected by the political-media apparatus, which instead accuses Syria of possessing and using chemical weapons.

The Italian premier Gentiloni stated that Italy, while supporting "the limited and targeted action to strike the manufacture of chemical weapons", has not in any way taken part in it.

The attack was actually agreed upon and planned within NATO. This is proved by the fact that, immediately after the attack, the North Atlantic Council was convened: the United States, Great Britain and France "briefed Allies on their joint military action in Syria overnight" and Allies officially expressed "their full support for this action" [2].

Premier Gentiloni also stated that "the logistical support that we provide above all to the US could not in any way result in the fact that from the Italian territory started direct actions aimed at hitting Syria".

In fact, the attack on Syria from the Mediterranean was led by the US Naval Forces Europe, with headquarters in Naples-Capodichino, commanded by Admiral James Foggo, who at the same time commands the Allied Joint Force Command Naples with headquarters at Lago Patria (Naples).

The war operation was supported by the US Naval Air Station Sigonella and the Niscemi station of the US Muos system of naval transmissions. As the radar tracks show, the US RQ-4 Global Hawk spy drones, taking off from Sigonella, played a key role in the attack on Syria, attack supported by air tankers to refuel the jet fighters.

Italy therefore shares the responsibility for a war action that violates the most elementary norms of international law. It is not yet known what its consequences will be, but it is certain that it feeds the flames of war. Although premier Gentiloni assures that "it cannot be the beginning of an escalation".

[1] “Progress in the elimination of the Syrian chemical weapons programme”, by Ahmet Üzümcü , Voltaire Network, 23 March 2018.

[2] “Statement by the North Atlantic Council on Actions taken against the use of chemical weapons in Syria”, Voltaire Network, 14 April 2018.