The US establishment behind the Helsinki Summit

While the international Press distorted the content of the NATO Summit, the US establishment pefectly understood the unique issue – the end of enmity with Russia. Thus disturbing the bilateral summit in Helsinki between the USA and Russia became its priority. By all means possible, it had to prevent any rapprochement with Moscow. 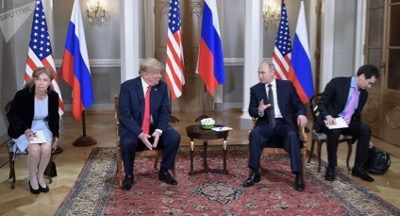 « We need to talk about everything, from commerce to the military, missiles, nuclear, and China » - this was how President Trump began at the Helsinki Summit. « The time has come to talk in detail about our bilateral relationship and the international flashpoints », emphasised Putin.

But it will not only be the two Presidents who will decide the future relationships between the United States and Russia.

It’s no coincidence that, at the very moment when the President of the United States was about to meet with the President of Russia, special prosecutor Robert Mueller III charged twelve Russians with having manipulated the US presidential elections by hacking into the data networks of the Democratic party in order to hinder candidate Hillary Clinton. The twelve Russians, accused of being agents of the military secret services (GRU), were officially defined as « conspirators », and found guilty of « conspiracy to the detriment of the United States ». Simultaneously, Daniel Coats, National Director of Intelligence and principal advisor to the President in these matters, accused Russia of working to « undermine our basic values and our democracy ». He then sounded the alarm about the « threat of cyber-attacks which have arrived at a critical point » similar to that which preceded 9/11, on behalf not only of Russia, « the most aggressive foreign agent », but also China and Iran.

At the same time, in London, British « investigators » declared that the Russian military secret service GRU, which had sabotaged the Presidential elections in the USA, is the same service which poisoned ex-Russian agent, Sergueï Skripal and his daughter, who, inexplicably, survived contact with an extremely lethal gas.

The political objective of these « enquiries » is clear – to maintain that at the head of all these « conspirators » is Russian President Vladimir Putin, with whom President Donald Trump sat down at the negotiating table, despite vast bi-partisan opposition in the USA. After the « conspirators » had been charged, the Democrats asked Trump to cancel the meeting with Putin. Even though they failed, their pressure on the negotiations remains powerful.

What Putin tried to obtain from Trump is both simple and complex – to ease the tension between the two countries. To that purpose, he proposed to Trump, who accepted, to implement a joint enquiry into the « conspiracy ». We do not know how the discussions on the key questions will go – the status of Crimea, the condition of Syria, nuclear weapons and others. And we do not know what Trump will ask in return. However, it is certain that any concession will be used to accuse him of conivence with the enemy. In opposition to the easing of tension with Russia are not only the Democrats (who, with a reversal of formal roles, are playing the « hawks »), but also many Republicans, among whom are several highly-important representatives of the Trump administration itself. It is the establishment, not only of the US, but also of Europe, whose powers and profits are directly linked to tension and war.

It will not be the words, but the facts, which will reveal whether the climate of détente of the Helsinki Summit will become reality - first of all with a de-escalation of NATO in Europe, in other words with the withdrawal of forces (including nuclear forces) of the USA and NATO presently deployed against Russia, and the blockage of NATO’s expansion to the East.

Even if an agreement on these questions were reached between Putin and Trump, would the latter be able to implement it? Or will the real deciders be the powerful circles of the military-industrial complex?

One thing is certain – we in Italy and Europe can not remain the simple spectators of dealings which will define our future.