The Trump administration and Iran

Like President Reagan, President Trump seems to be anti-Iranian. But perhaps this is only in appearance. While the former drew up a secret alliance with Imam Khomeiny, the latter may be dealing with ex-President Ahmadinejad in the same way. This is Thierry Meyssan’s heterodox theory. 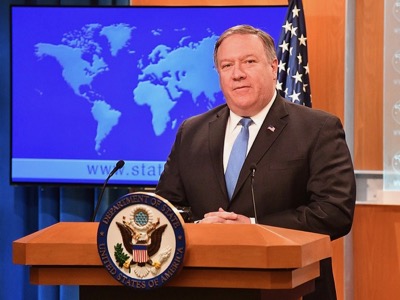 Mike Pompeo announces the creation of the « Iran Action Group »

On 16 August 2018, Secretary of State Mike Pompeo announced the creation of the « Iran Action Group » tasked with coordinating US policies after their withdrawal from the 5+1 nuclear agreement (Joint Comprehensive Plan of Action) [1].

This announcement was made as President Trump decided to postpone sine die the implementation of his plan for the Middle East (The Deal of the Century). But nothing can change in Palestine without the support of Iran.

Let’s remember, by the way, that Barack Obama’s JCPoA Treaty was not conceived only to guarantee that Iran is not making nuclear weapons. This was only the pretext. Its true aim was to prevent Iran from having access to high-level scientists and developing state of the art techniques [2]. Incidentally, the agreement forced Iran to close several faculties.

According to the US Democratic opposition, the Trump administration is reprising the neo-conservative policy of régime change, as indicated by the choice of the date of the announcement - the 65th anniversary of the Anglo -US coup d’etat against Iranian Prime Minister Mohammad Mosaddegh. However, although « Operation Ajax » of 1953 did indeed inspire the neo-conservatives, it occurred years before their movement was born, and has no connection with them. Besides which, the neo-conservatives served not only the Republican Party, but also the Democrats.

During his electoral campaign and for his first few days in the White House, Donald Trump continually stigmatised the globalist thinking of the neo-conservatives, and swore that the United States would no longer seek to change the régimes of foreign countries by force. As for the Secretary of State, he claimed that the coincidence of dates was simply fortuitous.

The people known as « neo-conservatives » form a group of Trotskyist intellectuals (thus opposed to the concept of nation-states), militants of Social Democrats USA, which worked with the CIA and MI6 to fight the Soviet Union. They were associated with Ronald Reagan’s power structure, then followed through all the US political mutations, remaining in power under Bush Senior, Clinton, Bush Junior and Obama. Today they conserve the control of a common Intelligence agency connected with the « Five Eyes » (Australia, Canada, New-Zealand, UK, USA) - the National Endowment for Democracy (NED) [3]. Partisans of the « World Revolution », they have popularised the idea of « democratising » régimes by way of « Colour Revolutions », or directly by means of war.

In 2006, they created the Iran Syria Policy and Operations Group within the Bush Junior administration. It was directed by Elizabeth Cheney, the daughter of Vice-President Dick Cheney. At first, they were housed with the Secretariat of Defense, then transferred to the Vice-President’s offices. The group had five sections.

The transfer of weapons to Iran and Syria from Bahreïn, the United Arab Emirates and Oman ;

The support for the Trotskyists and their allies, in Iran (the Peoples’ Mujaheddin) and Syria (Riad al-Türk, Georges Sabra and Michel Kilo) ;

The surveillance of Iranian and Syrian bank networks ;

The infiltration of pro-Iranian and pro-Syrian groups in the « Greater Middle East » ;

The penetration of the medias in the region in order to broadcast US propaganda.

In 2007, this group was officially disbanded. In reality, it was absorbed by an even more secret structure tasked with the strategy for global democracy (Global Democracy Strategy). This unit, under the command of neo-conservative Elliott Abrams (who was involved in the « Iran-Contras affair »), and James Jeffrey, spread this sort of work to other regions of the world.

It is this Group which supervised the planning for the war against Syria.

When the new President had a long meeting with Abrams at the White House, the US Press, which is violently anti-Trump, presented him as the first possible Secretary of State for the Trump administration. It obviously came to nothing.

However, the fact that ambassador James Jeffrey has just been nominated as a special representative for Syria makes the accusation that the Trump administration was attempting to resuscitate this strategy more credible. 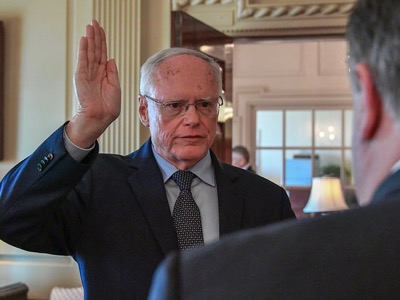 Jeffrey is a career « diplomat ». He organised the application of the Dayton agreements in Bosnia-Herzegovina. He was on post in Kuwaït during the Iraqi invasion. In 2004, under the orders of John Negroponte, he supervised the transition from the Coalition Provisional Authority (which was a private company [4]) to the post-Saddam Hussein Iraqi government. Then he joined Condolleezza Rice’s cabinet in Washington, and participated in the Coalition Provisional Authority. He was one of the theorists for US military redeployment in Iraq (the Surge), implemented by General Petraeus. He was also the assistant of National Security Advisor Stephen Hadley during the war in Georgia, then Bush Junior’s ambassador in Turkey and Obama’s ambassador in Iraq.

If we look a little closer, we may note that his entire career since the collapse of the USSR has been centred around Iran, but not necessarily in opposition to it. For example, during the war in Bosnia-Herzegovina, Iran fought alongside Saudi Arabia under the orders of the Pentagon. On the other hand, in Iraq, Jeffrey opposed the influence of Teheran. But when Georgia attacked South Ossetia and Abkhasia, he did not defend President Saakachvili, since he knew that he had rented two airports to Israël to facilitate an attack on Iran. 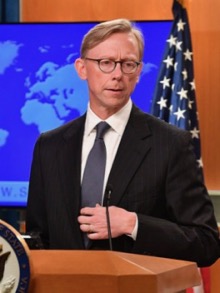 Mike Pompeo named Brian Hook as the head of the Iran Action Group. He is an interventionist who was the assistant for Condoleezza Rice, working with international organisations. Until now, he was tasked with elaborating strategies for the State Department.

According to Pompeo, the aim of this new group is not to change the régime, but to force Iran to change its politics. This strategy appears while the Islamic Republic is navigating a major economic and political crisis. While the clergy (doubly represented by the Cheikh President and by the Supreme Leader of the Islamic Revolution) is clinging to power, there are demonstrations against it all over the country. Contrary to the image we were presented in the West, Ayatollah Khomeiny’s revolution was not clerical, but anti-imperialist. The protests can therefore either lead to a change of the régime, or to the continuation of the Khomeinist Revolution, but without the clergy. It is this second option which is represented by ex-President Ahmadinejad (today under house arrest) and his ex-Vice-Ppresident Baghaie (imprisoned for 15 years and held incommunicado).

On 21 May last, before the Heritage Foundation, Mike Pompeo presented his 12 objectives for Iran [5]. At first glance, this seemed to be a long list of demands which are impossible to satisfy. However, when we look closer, points 1 to 3 relative to the nuclear question do not go as far as the JCPoA. Point 4 concerning ballistic missiles is unacceptable. Points 5 to 12 aim to convince Iran to give up the idea of exporting its revolution by force of arms.

On 15 August, in other words, on the day before Pompeo’s announcement, the Supreme Leader of the Islamic Revolution, Ayatollah Ali Khamenei, recognised that he had been in error when he allowed Cheikh Hassan Rohani’s team to negotiate the JCPoA agreement with the Obama administration [6]. Note that the Supreme Leader had authorised these negotiations before Rohani’s election, and that he – and the eviction of Ahmadinejad’s movement – had been part of the preparatory discussions.

Mahmoud Ahmadinejad, who makes a distinction between the policies of Presidents Obama and Trump, wrote to the new President just after his election [7]. He demonstrated that he shared Donald Trump’s analysis of the Obama-Clinton global system and its painful consequences for the rest of the world and also for the citizens of the United States.

When the demonstrations began in December 2017, the Rohani government accused Ahmadinejad of being responsible. In March 2018, the ex-President clinched his break with the Supreme Leader by revealing that Khamenei’s office had misappropriated 80 billion rials belonging to humanitarian and religious foundations [8]. Two weeks before Pompeo’s announcement, although he was under house arrest, he called for the resignation of President Rohani [9].

In other words, the White House could be quite comfortable with a return to power of Ahmadinejad’s party, on the condition that Iran agrees to export its Revolution only by the debate of ideas.

The author lived in Iran for six months. He advised President Ahmadinejad during his speech before the UNO in 2010.

[6] “The Supreme Leader of the Iranian Revolution Rectifies his Views”, Voltaire Network, 18 August 2018.