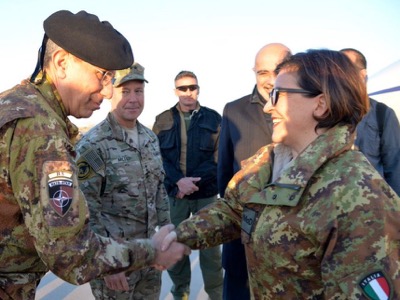 Minister for Defence Elisabetta Trenta (5-Star Movement), on the mike of a musical radio station, sang « C’era un ragazzo che come me amava i Beatles e i Rolling Stones » [1], and declared « This song makes me think about the value of peace, a priceless value that we must always preserve ».

Ten days later, in Afghanistan, the military-garbed Minister praised « our armed presence outside of the frontiers of Italy, guided by the values of our Constitution, on a fundamental mission for peace ».

The mission is Resolution Support, initiated by NATO in Afghanistan in 2015, after the International Security Assistance Force (ISAF), a United Nations mission of which NATO had taken command by armed force in 2003.

So the US/NATO war continues in Afghanistan, now in its eighteenth year. It was launched by the USA on 7 October 2001 on the official motive of hunting down Oussama Ben Laden, accused of the attacks of 11 September, who was supposedly hiding in an Afghani cave under the protection of the Taliban.

The true reasons were revealed by the Pentagon in a report published one week before the beginning of the war - « There is a possibility that a military rival is emerging in Asia with a formidable base of resources. Our armed forces must maintain the capacity to impose the will of the United States on any adversary, in order to change the régime of an enemy State or occupy a foreign territory until US strategic objectives are realised ».

In the period preceding 11 September 2001, there had been strong signals of a rapprochement between China and Russia, which were actualised when the two countries signed the « Treaty of Good Neighbourship and Friendly Cooperation » on 17 July 2001. Washington considered that this rapprochement between China and Russia was a challenge to US interests, at the critical moment when the USA were trying to fill the void left in Central Asia by the disintegration of the USSR – a region of capital importance both for its geostrategic position in terms of Russia and China, and for its border reserves of oil and natural gas in the Caspian. The key position for the control of this region is Afghanistan.

This explains the headstrong engagement in a war which has already cost the United States alone more than 1,000 billion dollars. The mission which is currently under way is presented by NATO as a « non-combat mission ». But on the basis of official data, in the first ten months of 2018, the US Air Force dropped approximately 6 thousand bombs and missiles on targets over Afghanistan. As well as fighters and armed drones, they used B-52 heavy bombers equipped with rotary launchers, which increase by two thirds the already enormous destructive capacities of the aircraft by enabling it to drop as many as 30 powerful precision-guided bombs in one mission.

Apart from this visible war there is another, hidden, waged by US and Allied Special Forces, with the mission to assassinate Taliban chieftains, or those presumed to be chieftains, and other people who are considered to be dangerous. The result is disastrous for NATO – as the number of civilian victims increases, so the Taliban gain ground.

Italy has been participating in the Afghanistan war for more than 15 years, under US command and in violation of Article 11 of the Constitution. Its contingent is ranked third out of 39 participants, after the United States and Germany. Italian officers are deployed in Tampa, Florida with the USA Command, and in Bahrein as liaison personnel with the US forces there.

And while the war continues to crush its victims, our Minister of Defence declares - at the Herat Orphanage - that Italian soldiers gave about two hundred winter outfits to « young and less fortunate children ».