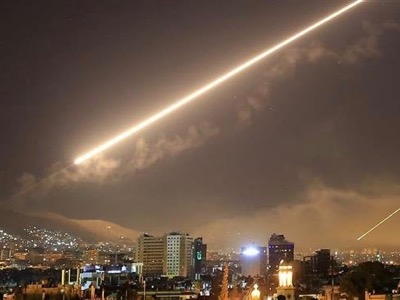 On instructions from my Government, I should like to draw your attention to the following:

On the night of Friday, 11 January 2019, at 2315 hours, the Israeli occupation authorities launched yet another attack against the territory of the Syrian Arab Republic, in flagrant violation of Security Council resolution 350 (1974) on the agreement on the disengagement of forces between the two sides, when they attacked number of locations in the area around the city of Damascus and its countryside with missiles launched from Israeli warplanes.

This shameless Israeli aggression comes on the heels of other attacks, of which the most recent was an attack on 25 December 2018 launched by Israeli warplanes from over Lebanese territory.

These cowardly attacks and the repeated, deliberate and dangerous provocations being carried out by the Israeli occupation authorities do not in any way obscure the fact that what Israel is doing is no different from what Islamic State in Iraq and the Levant (ISIL) and the Nusrah Front are doing. They are using the same terrorist tactics that threaten international peace and security. Nor will these acts distract attention from the fact that Israel and those terrorist entities share a common agenda. This brazen attack is part of ongoing Israeli efforts to prolong the crisis and the terrorist war being waged against Syria, and to raise the morale of the remaining pockets of Israel’s terrorist proxies. It is also another attempt by the Israeli Government to evade its escalating domestic problems, for reasons the international community knows all too well.

The Syrian Arab Republic stresses that this dangerous and hostile behaviour on the part of Israel would not be continuing were it not for the political, military and media cover being provided by the United States administration. Israel is also being provided with immunity from accountability by known States in the Security Council, which enables it to continue to practice State terrorism and threaten regional and international peace and security without restraint or restriction. The silence of the Security Council in the face of these flagrant violations cannot be justified; the Council is clearly abdicating its responsibilities under the Charter of the United Nations instead of punishing the aggressor.

The Syrian Arab Republic once again calls upon the Security Council to fulfil its responsibility to maintain international peace and security. The Council must take resolute and immediate action to prevent the recurrence of these Israeli acts of aggression; to compel Israel to respect Security Council resolutions on the Disengagement of Forces Agreement and resolutions that reject the annexation of the occupied Syrian Golan; and to hold Israel accountable for the acts of terrorism and crimes it has committed against the Syrian people and for its ongoing support for terrorist organizations. Such conduct is in flagrant violation of the Charter of the United Nations, international law and Security Council resolutions 242 (1967), 338 (1973), 350 (1974) and 497 (1981), and all instruments and resolutions pertaining to counter-terrorism.

The Syrian Arab Republic stresses that these cowardly Israeli attempts at intimidation and provocation will not diminish its resolve to stand up to anyone who tries to attack the Syrian people or violate Syrian sovereignty – first and foremost Israel and its various proxy terrorist organizations in the region – or lessen its determination to recover the occupied Syrian Golan.