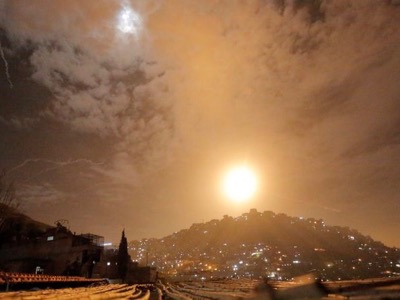 On instructions from my Government, I draw your attention to the following:

At dawn on Monday, 21 January 2019, at 0110 hours, the Israeli occupation authorities once again attacked the territory of the Syrian Arab Republic, in flagrant violation of Security Council resolution 350 (1974) on the Disengagement of Forces Agreement, launching successive waves of rockets from over Lebanese and occupied Palestinian territory and from over Lake Tiberias in the occupied Syrian Golan.

Since the crisis in Syria began, the attacks and schemes of Israel have failed to prevent the Syrian Arab Army and its allies from defeating Islamic State in Iraq and the Levant (ISIL), the Nusrah Front and other terrorist groups that have been the occupying Israeli authorities’ partners in terror. The occupying Israeli authorities have therefore continued to perpetrate acts of State terrorism with growing frequency. However, instead of intimidating the Syrian people, the Israeli attacks have made it all the more determined that it will ultimately vanquish terrorism and recover the occupied Syrian Golan to the line of 4 June 1967.

This treacherous aggression is part of continued attempts by Israel to prolong the crisis and the terrorist war in Syria in order to raise the morale of its last pockets of terrorist proxies. It is an attempt by the Israeli Government to evade its escalating domestic problems, for reasons the international community knows very well.

The Security Council and the States Members of the United Nations should note that, while the occupying Israeli authorities had for many years covered up their attacks against Syria in support of terrorists, high-ranking Israeli officials have recently acknowledged and claimed responsibility for these attacks. They have stated that Israel will continue to carry out such acts and stands ready to provoke confrontation.

The Syrian Arab Republic stresses that this dangerous and hostile behaviour on the part of Israel would not be continuing were it not for the limitless and ongoing support provided to Israel by the United States administration, which has openly endorsed these attacks; the immunity from accountability granted to Israel by the United States and other well-known countries on the Security Council; and the deafening silence which those countries impose on the Council, preventing it from doing its duty to confront such criminal attacks.

The Syrian Arab Republic once again calls upon the Security Council to fulfil its responsibilities under the Charter of the United Nations, chief among them the maintenance of international peace and security. The Council must take resolute and immediate action to prevent the recurrence of Israeli acts of aggression; to compel Israel to respect Security Council resolutions on the Disengagement of Forces Agreement and resolutions that condemn the annexation of the occupied Syrian Golan; and to hold Israel accountable for its crimes and acts of terrorism against the Syrian and Palestinian peoples and for its ongoing support for terrorist organizations. Such conduct is in flagrant violation of the Charter of the United Nations, international law, Security Council resolutions 242 (1967), 338 (1973), 350 (1974) and 497 (1981), and all of the international instruments and resolutions on counter-terrorism.

US bombing of Abu Kamal