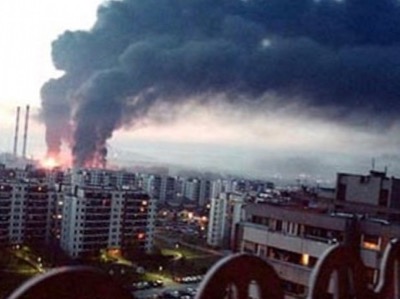 On March 24, 1999, NATO began the bombing of Yugoslavia, which lasted for 78 days. For the first time since World War II an aggression was committed against a sovereign European nation, an active participant in the anti-Hitler coalition, one of the founders of the United Nations and engineers of the post-war international security system. The Alliance had not secured the UN Security Council mandate and lacked any legitimate grounds for these actions. This act of aggression was a gross violation of the basic principles of international law enshrined in the UN Charter, the Helsinki Final Act, as well as the international commitments of the bloc’s member-countries. The Alliance’s behaviour ran contrary even to the 1949 North Atlantic Treaty, whereby NATO countries undertook not to endanger international peace, security and justice and to refrain from the threat or use of force in international relations if it runs contrary to the UN objectives. This was the beginning of replacing international law with an “order” based on arbitrary rules, or rather on the rule of force.

About 2,000 civilians, including at least 89 children, were killed in the barbaric air strikes, which were cynically and shamelessly called the “humanitarian intervention for the good.” Among the victims were a number of Kosovo Albanians, who were allegedly being “saved” by NATO. Thousands of civilian facilities were destroyed in dozens of cities. The use of depleted uranium munitions led to contaminated soil and water in many areas, which caused a surge in cancer rates.

The Autonomous Province of Kosovo was forcibly separated from the rest of the country under the propagandistic pretext of thwarting the allegedly unfolding “humanitarian disaster”. In reality NATO became a trigger for a real human tragedy, a smokescreen hiding the anti-Serb ethnic cleansing that caused over 200,000 non-Albanians to leave their homes. Tens of thousands of their properties remain usurped by Pristina and Kosovo Albanians. No progress has been made in the return of the refugees and displaced persons.

Protected by the NATO bombing umbrella, Kosovo Albanians perpetrated horrendous crimes, including kidnapping Serbs for illegal organ trafficking. The facts were revealed in the report by PACE rapporteur Dick Marty in December 2010. The EU Specialist Chambers, which have been operating since July 2017, are responsible for bringing the perpetrators to justice. However, no charges have been brought as of yet. We believe that all militants of the so-called Kosovo Liberation Army complicit in crimes must face justice regardless of the positions they currently hold in Pristina.

We state that NATO’s assault on Yugoslavia 20 years ago undermined the mechanisms that ensured peace and security in Europe for decades. Meanwhile, the Kosovo problem has not been resolved. On the contrary, it remains the key source of instability and crisis in the Balkans. It could not have been any different once NATO cleared the way to power in Pristina for former KLO fighters who later escaped their sponsors’ control.

The heavy burden of responsibility for these actions and their consequences falls completely on the Alliance’s leaders and NATO member-countries that took part in the aggression against Yugoslavia. It will forever remain a stain on NATO’s reputation, which will not be removed by speedily herding the region’s countries to the Alliance, thus strengthening the division lines in the Balkans and public discord.

How long will Belgrade seesaw between NATO and Russia?