The rise of tension in the Gulf is a dangerous game which could turn bloody at any moment. The unclaimed sabotage of the tankers could have been perpetrated by almost any of the parties, including the United States, who are well-versed in the use of false-flag operations. However, rational analysis shows that Teheran today is not at all in this state of mind. 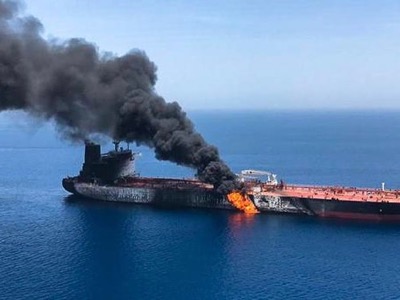 The United States and the United Kingdom accuse Iran of the sabotage of six petrol tankers in the Gulf, without presenting the slightest proof except an indecipherable US video. According to the accusers, the video shows a craft of the Guardians of the Revolution recuperating an unexploded limpet-mine from the hull of one of the tankers, although the sailors themselves assured that their ship had been hit by a drone or a missile.

The Irano-US duel has changed its nature since the arrival of Donald Trump at the White House, in January 2017, but the Iranian reaction can only be understood in the context of the previous episodes and their reversals.

President George Bush did everything in his power to launch a war against Iran following that against Iraq. He intended to continue the systematic destruction of the State structures in the « Greater Middle East », as planned by the Rumsfeld/Cebrowski strategy. However, the Baker-Hamilton Commission (2006) prevented this first attempt. The US ruling class judged the return on its investments too slow for them to support an « Endless War ». A second attempt was foiled in 2007–2008 by the opposition of CentCom Commander, Admiral William Fallon, who had begun discussions with Mahmoud Ahmadinejad concerning the stabilisation of Iraq. Finally,vice-President Dick Cheney gave instructions to Israël to rent Georgian airports so that they could bomb Iran directly without having to refuel their planes in the air. But it was Russia that grounded the Israëli bombers in the first hours of the war in South Ossetia (August 2008).

On his arrival at the White House, Barack Obama attempted to continue the same strategy, but in a less brutal manner. Like Bush and Cheney, he was persuaded that action had to be taken rapidly to get hold of Iranian oil, since the resource was soon to become scarce on the world economy (the « peak oil » theory). Rather than launching a new war which the US public would not support, he increased the number of demonstrations intended to overthrow his Iranian counter-part (2009). Noting the failure of this « colour revolution » faced with Mahmoud Ahmadinejad, he began discussions with Washington’s usual partners since the Khomeini Revolution, in other words the clan of Hachemi Rafsandjani (March 2013), and more particularly Cheikh Hassan Rohani, who had been the primary contact during the Iran-Contras affair. When Rohani was elected(2013), he immediately began State-to-State negotiations to share the Middle East between the Saudis and the Iranians, under cover of the struggle against nuclear proliferation. A treaty was negotiated in Switzerland in the presence of the great powers, but it was not signed until 2015. Iran regained the right to export its oil in order to kick-start its economy. 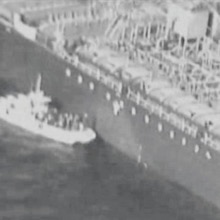 Progressively, the relations between the two states normalised until Donald Trump became the US President (2017). His objective was completely different – the White House no longer believed that the US were about to run out of oil, but was persuaded, on the contrary, that there was too much of it on the market – the White House no longer pursued the imperial policy of its predecessors, but occupied itself solely with making money. Instead of organising US domination of the Middle East, it decided to limit its supply on the market in order to be able to maintain the price of crude oil at the level of US shale oil. The United States encouraged demonstrations against the politico-religious class (2017-18), then canceled the agreement on nuclear energy (2018).

Since that time, Iran seems paralysed. Unlike politicians, the religious leaders are rigid and are unable to question themselves. God, whom they represent on earth, can not contradict Himself. This is why, contrary to a widely-held idea, the Iranian theocracy is excellent at business, but weak at diplomacy.

Iran refuses all offers of negotiation with the United States, and is waiting desperately for the Democrats to regain power in Washington – a dangerous gamble insofar as Donald Trump may be re-elected for 4 more years, and the Iranian economy is currently on the brink of collapse.

This paralysis prevents Iran from planning the sort of provocation of which Washington and London are accusing it, particularly since attacks against Western interests would compromise their future relations with US Democrats.

Unexpectedly, the Trump method will not prevail in this case. Persian culture is one of miniatures. In particular, the Iranians are a people who are capable of enduring long periods of torment before they win.