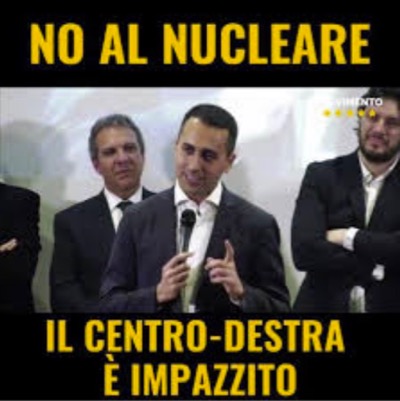 Is there finally a Minister of Foreign Affairs who will commit to Italy joining the UN Treaty on the Prohibition of Nuclear Weapons?

The neo-minister Luigi Di Maio subscribed in 2017 to the Ican Parliamentary Pledge, the international coalition to which was awarded the Nobel Peace Prize [1]. In doing so, the political leader of the 5 Stars Movement - the current Minister of Foreign Affairs - has pledged to "promote the signature and ratification of this Treaty of Historic Importance" by Italy.

The Ican Commitment was also subscribed to by other current 5-star ministers -Alfonso Bonafede (Justice), Federico D’Incà (Relations with Parliament), Fabiana Dadone (Public Service) - and by other M5S parliamentarians, like Roberto Fico and Manlio Di Stefano.

But there is a problem. Article 4 of the Treaty states: "Each State Party which has nuclear weapons owned or controlled by another State on its territory shall ensure the prompt withdrawal of such weapons". To accede to the UN Treaty, Italy should ask the United States to withdraw B-61 nuclear bombs from its territory (which already violate the Non-Proliferation Treaty) and not to install the new B61 -12 or other nuclear weapons. Moreover, since Italy is one of the countries which (as NATO itself states) "provide the Alliance with aircraft equipped to carry nuclear bombs, over which the United States retains absolute control, and staff trained for this purpose ", to accede to the UN Treaty, Italy should ask to be exempted from this function.

Unthinkable requests from the second Conte government which, like the first, considers the United States as a "privileged ally".

Here is where the cards are shown. The Ican Commitment was subscribed to in Italy by more than 200 parliamentarians, mostly from the Pd and the M5S (about 90 each), the current government parties. With what result?

On September 19, 2017, the day before the Treaty was opened for signature, the House approved a Pd motion (also voted by Forza Italia and Fratelli d’Italia) which committed the Gentiloni government to "evaluate the possibility" of joining to the UN Treaty. For its part, the M5S did not ask for the accession to the UN Treaty, and therefore the withdrawal from Italy of nuclear weapons, but to "declare the unavailability of Italy to use nuclear weapons, and not to buy the necessary components to make the F-35 aircraft fit for the transport of nuclear weapons ". Ergo: that the F-35 planes, designed for nuclear attack especially with the B61-12, be used by Italy with a kind of security that prevents the use of nuclear weapons.

The following day, the North Atlantic Council, with full Italian support, rejected and attacked the UN Treaty. It has so far been signed by 70 countries, but, because of pressure from the US and NATO, ratified only by 26 while it takes 50 to enter into force.

The same thing happened with the Treaty on Intermediate Nuclear Forces buried by Washington. Whether at the NATO, UN or EU headquarters, the first Conte government has lined up behind the US decision, giving the go-ahead for the installation of new US nuclear missiles in Europe, Italy included.

The solemn undertaking pledged by Pd, 5 Étoiles and others has therefore proved, based on the test of facts, to be a demagogic expedient to collect votes. If for any of them this is not so, let them demonstrate it in fact.

Because of the "inevitable link with the United States", reaffirmed yesterday by Conte in his speech in the House, Italy finds itself deprived of its own sovereignty and transformed into the front line of US nuclear strategy. With multi-partisan consensus and complicit silence.