In the late evening of 13 October, President Emmanuel Macron convened a Defense Council at the Jupiter Command Post in the Elysée Presidential Palace to assess the situation of the military and civilian forces deployed in Northern Syria [1].

• President Macron had secretly added eight military bases to the one already set up by his predecessor President Hollande. All nine are illegal under international law. Their mission was to bolster the dismantling of Syria and the creation of a new Kurdish state, referred to as "Rojava."
• He had also instructed the DGSE (France’s external intelligence agency) to facilitate the enrolment of French anarchists into the ranks of the Kurdish YPG [2], one of whom has already returned to France and tried to shoot down a helicopter of the National Gendarmerie [3].
• Lastly, he recommended that humanitarian NGOs should move around in Syria under military control.

It is not clear whether the Defense Council was informed in time of the agreement, negotiated at the same time by the Russian army at its Hmeimim Air Base in Syria, between the Kurdish YPGs and the Syrian Arab Republic.

For three years and without being authorized to intervene, French personnel present in Syria witnessed the crimes against humanity which were perpetrated by Kurdish elements against Christian Assyrians and Arab Muslims in north-eastern Syria.

They were not pulled out when, on 6 October, the White House informed France of the imminent Turkish invasion, which began on 9 October.

Today, in the absence of US forces, French personnel are trapped between two fires: on one side the Turkish army that President Hollande betrayed in 2015, and on the other their former Kurdish allies now rallied to the Syrian Arab Republic that France is fighting. 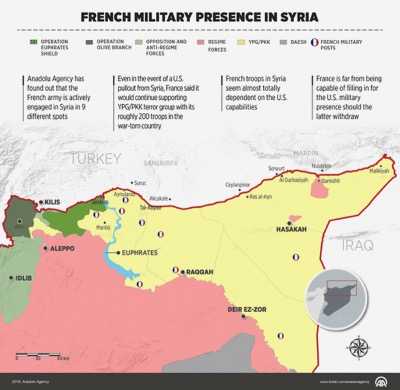 To read on voltairenet.org: All that you are not being told about the Turkish operation "Source of peace", a three-part study by Thierry Meyssan.

1. The genealogy of the Kurdish question (in French Tuesday, October 15)

2. Kurdistan, as imagined by French colonialism (in French Wednesday, October 16)

3. The Turkish invasion of Rojava (in French Thursday 17 October)

[2] Cf. the film Sisters in Arms by Caroline Fourest, former spokesperson for the Union Communiste Libertaire.