Bolivia hands over its missiles to the United States 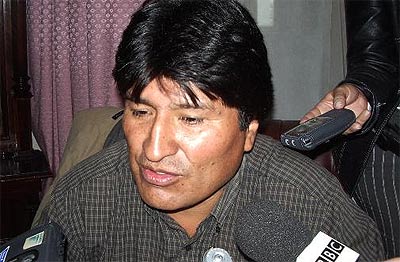 Evo Morales, “cocalero” and MAS (Movement towards Socialism) leader, and presidential candidate for elections in Bolivia scheduled for December 18, recently stated that 28 MHN-5 surface-to-air missiles made in China had disappeared. The missiles were in Bolivian arsenals and handed over to the United States for “deactivation”.

Morales indicated he was planning to file a lawsuit against the current acting president Eduardo Rodríguez and his minister of defense Gonzalo Méndez Gutiérrez, for “betraying the homeland” (a popular uprising to overthrow the former president Carlos Mesa from power in June 2005). In order to justify why the Chinese missiles were sent to the United States, the Bolivian authorities mentioned that such equipment was obsolete, and their handling was dangerous. It seems, though, that they had been acquired in China in the early 90’s and were in perfect condition.

Furthermore, they were the only missiles that the Bolivian army had, and whose lack of ordnance is chronic. In that case, why giving those weapons away?

Used to different forms of interference in Latin America, in 2004, the United States had already tried unsuccessfully to convince the former president Carlos Mesa to hand over such armaments, said the former Foreign Minister Juan Ignacio Siles. The imminent presidential decision and fear over Evo Morales’ victory are obviously the factors that precipitated the events.

The Bolivian “missile crisis” [the author has used the same term as in French to make reference to the missile crisis, in October 1962, between the United States and the Soviet Union, regarding the installation of intermediate-range Soviet missiles in Cuba. Note of the Translator] clearly illustrates the U.S. intentions, which might be planning to launch a military operation against Bolivia, with the excuse of any “threat to democracy”, and then recover something from their lost ground in Latin America over the past few years. If this is not the case, why such concern then about roughly 30 missiles that pose no threat to anyone?

Media concentration in France
Information, a merchandise submitted to the rules of market

Is it necessary to burn Hugo Chávez?
Propaganda

Empire
The superpower without complex