The stuttering of the Euro crisis

The killing game begins: the Irish financial crisis repeats the Greek pattern and paves the way for those next in line – Portugal and others. To pay for the wars in Afghanistan and in Iraq, the United States has chosen to monetise its public debt, by palming off its bills to the rest of the world. This flow of liquidity allows the capitalist elites to pounce on a plumper prey. Having pillaged the third world, they are at last able to attack the euro. However, observes Jean-Claude Paye, far from preventing them, the European central bank is abetting them to the detriment of European populations, henceforth constrained by austerity politics. 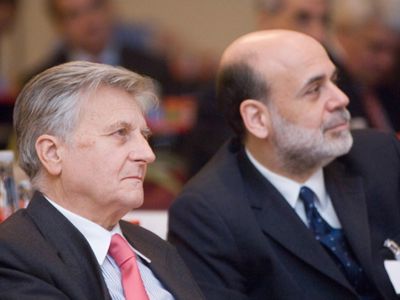 Jean-Claude Trichet (European Central Bank) and Ben Bernanke (US Federal Reserve): the interests of the capitalist elites align, this time to the detriment of the European people.

A phrase attributed to Marx has taught us that if history does not repeat itself, it has a tendency to falter. This diagnosis illustrates perfectly the new attack on the euro. On the occasion of the Irish crisis, the financial markets have orchestrated a scenario comparable to that of the offensive against Greece [1]. Again, the same external cause is involved: the expansionist monetary policy of the US Federal Reserve. In a similar manner, the market offensive will also be endorsed by Germany.

As already witnessed in April-May 2010, rather than lowering the value of the dollar, the announcement of an intended massive injection of liquidity by the Fed has had the effect of renewing the speculative assault against the euro zone. In part, Germany has also been responsible for the surge in interest rates on Irish bonds, as well as on Portugese and Spanish bonds. While purely formal, Angela Merkel’s recent declarations calling for the involvement of private creditors in the debt restructuring of certain Euro zone countries has reinforced the market’s distrust of the weakest among them.

The objective of the Fed: an uninterrupted creation of financial bubbles

The wisecrack made by John Connally, Secretary of the Treasury under Nixon in 1971, “The dollar is our currency, but it is your problem”, is as relevant as ever. To date, the monetisation of American debt has posed less of a problem for the US than for its satellites. The bush of Greece’s financial decay has already sufficed to hide the forest of U.S. deficits. Likewise, this year’s end [2010] has seen the Irish debt eclipse the announcement of a new programme of a massive Treasury bonds purchase by the US Fed. This manoeuvre of ‘quantitative easing’ boils down to printing money in order to lower the interest rates on government bonds. It should allow, at the rate of 75 billions per month, for an injection of $600 billion into the U.S. economy.

The Fed had already introduced a sum of $1,700 billion into circulation. This latest injection of liquidity is an indication that this monetary policy has largely failed, since a new phase of bond purchases turned out to be necessary. Above all, it shows that the ‘quantitative easing’ is no longer an exceptional policy. It is in for the long term and thus becomes a normal procedure [2]

Contrary to U.S. Treasury declarations, the purpose behind the money creation spawned has nothing to do with permitting the extension of bank credit to individuals and enterprises. Given the economic conjuncture, credit demand is actually weak and the financial institutions have at their disposal significant reserves.

There is already an abundance of liquidity, and adding to it is not going to solve the problem which is linked to the distrust of the banks vis-à-vis the credit worthiness of potential borrowers, that is to say on the profitability of their investments.

What is then the point of this permanent injection of liquidity into an already saturated market? To answer this question, suffice it to observe the effects of this policy: formation of speculative bubbles and surge in shareholder value, capital inflow in the countries experiencing strong growth, such as China or India, and speculative attacks, notably against the euro zone.

The U.S. policy of public debt monetisation is actually not very inflationary because much capital leaves the United States for emergent markets and thus does not fuel internal demand. Neither does it provoke a pronounced fall of the dollar, considering that the hike in commodities purchases it generates - gold, raw materials and oil, which do influence the dollar because denominated in that currency - act to underpin its rate. U.S. speculators buy in their national currency, whereas foreign ‘investors’, encouraged to follow the upward movement induced by this policy, exchange their national currencies against dollars to buy U.S. assets.

The objective of the ECB: the transfer of income from the workers to the banks

Regarding the European Union, the ECB has announced the continuation of its policy of buying sovereign debt. It has also decided to prolong its bank refinancing plan, unlimited at a fixed rate, for an additional period of at least four months. Here also, one notes a change of stance: this policy is no longer presented as exceptional, but as permanent [3]. What has changed in ECB policy is the duration of its commitment. “In normal times, the ECB buys short term securities: three weeks, a month, more rarely three months, but since the crisis, the ECB has been buying 12 month securities – previously unheard of.” [4] This change overturns the role of the central bank from lender of last resort into front line lender. The central bank thus functions as a full-fledged financial lending institution.

So far, the ECB has acquired government bonds for a total of €67 billion [5], essentially securities of troubled states, such as Greece and Ireland. We are thus very far from the $600 billion of repurchased securities effected by the Fed. The policy of the European central bank differs not only quantitatively, but also qualitatively, as it has chosen to sterilise its cash injection by reducing as much the loans made to the private banks.

The objective of the European central bank is to defer as much as possible a restructuring of the Greek, Irish, Portugese … debt; the big European banks being heavily involved in their financing. It is above all a matter of saving the financial institutions and making wage-earners and savers foot the bill.

To do this the European Union and its member states have transferred to the financial markets the key to deficit financing. The states must borrow from the financial institutions which themselves obtain liquidity at cheap rates from the European central bank.

While deficits of EU member states, averaging 7%, are clearly receding by comparison with the 11% of the U.S. federal government [6], the European Union, by contrast with the U.S., is committed to a brutal reduction of public expenditure. The Commission wants to impose on countries a long diet of austerity to return to a total public debt less than 60% of GDP and has set up procedures to curb excessive deficits by the member states. By the first half of 2010, practically all the member states had submitted to it. The Commission has also called for the states to return under the bar of 3% [the yearly deficit as a percentage of GDP] before 2014 regardless of the domestic economic situation. The means proposed to realise these objectives do not consist in taxation of high incomes or of financial transactions, but rather in a reduction of wages, both direct and indirect - in other words to implement wage restriction policies, and to call into question the publicly-funded retirement and health systems.

Complementarity of the Fed and ECB policies

The strongly expansionary monetary policy of the U.S. consists in buying medium- and long-term sovereign debt (2 to 10 years), on the secondary market, so that the new issues of the Fed will be able to find borrowers at a low interest rate, more tolerable for American public finances. This policy not only matches the interests of American capital, but is in line with the interests of multinational capitalism. It is the principal tool for keeping interest rates very low, beneath the real level of inflation. It is a matter of allowing, not only the U.S., but also Europe and Japan, to cope with their mountain of debt while offering minimal rates. Any bond yield increase [on public debt] could lead these states to bankruptcy. Moreover, in the medium term, this lax practice will have an inflationary effect which will devalue the public debt and reduce, in real terms, the financing burden.

Given the particular role of the dollar in the global economy the U.S. Federal Reserve is the only central bank that can afford to pursue such a policy, now practised on an elevated scale. Any other national currency would be attacked by the markets and heavily devalued. The Fed is the only central bank that is able to print money and to have this additional money accepted by foreign economic agents.

The monetisation of the U.S. debt, in fueling financial markets, facilitates the launching of speculative operations against the euro zone at little cost. It is in line with the EU’s objectives, for it allows the market to rally and to exert pressure on European populations, to make them accept a drastic reduction in their living standards. The fiscal policies instituted by the member states will prevent any economic recovery, further undermine the public finances and lay claim for further transfers of income from wage-earners to banks and businesses. The stuttering of the Euro crisis is far from over. The heralded intention to discount anew the grading of Spanish government debt by the U.S. ratings agency Moody’s [7], owing to its heavy refinancing needs in 2011, does not contradict this diagnostic.

[1] “The EU and the Hedge Funds: regulation or the relinquishment of European sovereignty?”, by Jean-Claude Paye, Voltaire Network, 22 November 2010.