France According to François Hollande

François Hollande’s slogan has been "Change is Now!" Two months after his election, while he has broken with the style of his predecessor, the new French President is bent on pursuing identical policies. For Thierry Meyssan, this repudiation is the product of an ideology clearly revealed in the speeches of the new president, one of collaboration with the current-day Empire 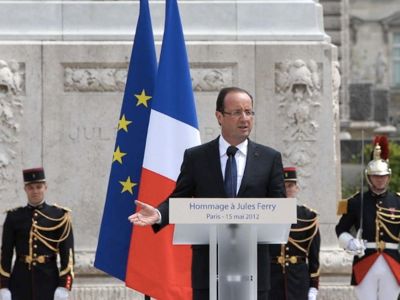 It is difficult to discern the personal convictions of François Hollande because as a candidate he did his utmost to maintain amibiguity for wider electoral appeal and to forge a majority. Nonetheless the new president has revealed on two occasions the true content of his thinking. He included in his inauguration ceremony an homage to Jules Ferry and sparked surprise during the commemoration of the 1942 Vel d’Hiv Roundup by his reinterpretion of this historical event.

Let us examine these two moments.

On May 15, 2012, François Hollande decided to honor the founder of public, free and compulsory education while characterizing Jules Ferry’s position in favor of colonization as a "moral and and political error." The initiative of the new president to elevate the importance of school could have made reference to other historical figures whose records he would not have had to criticize. If he chose to pay tribute to Ferry’s legacy rather than that of others, it is because Ferry changed the objective of schooling, from an instrument of emancipation to a tool for integration. For Ferry, the school would no longer focus on liberating children from prejudice by developing their critical spirit and giving them access to knowledge in the service of citizenship. The school thus acquired as its primary function the removal of the child from the influence of his family, the Church and regional culture to create an obedient student, ready to give his life for the expansion of the French Empire.

School did not become compulsory so that all children could benefit; rather, as Michel Foucault has shown, it was designed to serve as the entryway to the barracks. Moreover, the authoritarian logic that propelled these "Black Hussars" to rap the knuckles of students speaking their native language rather than French also authorized the use of force to "civilize" the indigenous people of Tonkin. It is impossible to historically and philosophically disassociate the pseudo-laicity of Ferry from his colonial militarism.

In his time, the Radical Georges Clemenceau opposed the project of the Socialist Jules Ferry. His criticism focused primarily on the supposed "civilizing mission" of France which is the prefiguration of today’s Responsibility to Protect doctrine. Clemenceau did so not because he denied the relatively high development of Europe but because he rejected the concept of "superior races". Similarly, today the problem is not to establish whether French governance is more or less violent than that of Syria but whether to recognize or not the sovereignty of the Syrian people.

In addition, Clemenceau estimated that the colonial project was a military adventure on the part of the high bourgeoisie that functioned as a diversion from the real issue : the liberation of Alsace-Lorraine which had been annexed and occupied by the German Empire. Ferry accused the Radicals of being "excessively preoccupied with contemplating this sore" (the loss of the Alsace-Moselle region) to the point of abdicating their responsibilities to the rest of the world. Clemenceau retorted, "My patriotism is in France!" and praised the emerging principles of international law.

But let us return to our reading of the speeches of Francois Hollande. 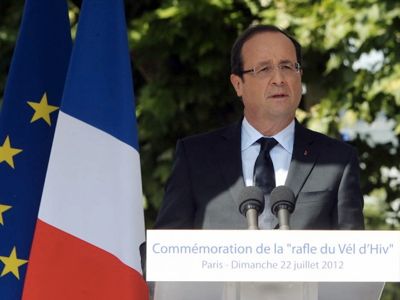 On July 22, he commemorated the 70th anniversary of the roundup at the Winter Velodrome [commonly called in France the Rafle du Vel’ d’Hiv, Ed.]. In July, 1942, the police and gendarmes of Paris arrested 13,152 Jews, detaining them in the stadium of the Velodrome d’Hiver before deporting them to certain death.

Francois Hollande created a sensation when he asserted "We owe the Jewish martyrs the truth about what happened 70 years ago. The truth is that a crime was committed in France by France." With this declaration he took sides in a well-known debate the irreconcilable terms of which I wish to remind the reader:

To avoid any ambiguity on this matter, it is necessary to recall that after having accepted an armistice [with Germany], Philippe Pétain, the president of the National Council, had himself granted full powers by the members of the Council who had followed him to Vichy. He abrogated the "French Republic" to establish the "French state", thereby becoming not the "French head of state" (which is a protocollary rank), but the "head of the French state" (which is a title) and proceeded to impose an administrative dictatorship responsible for applying the unconscionable terms of the armistice. The French, having been decimated by WWI, in the majority did not see themselves as capable of resisting and succumbed to the new de facto state. Only a tiny minority rejected the armistice, first among them the Under Secretary of War, Charles de Gaulle who established in London the Provisional Government of the French Republic.

Word choice is critically important here as there is nothing academic about this debate. Just before the end of the Second World War, the three principal Allies (the Soviet Union, the United Kingdom and the U.S.) were obliged to broach the issue themselves. At the outset, they considered Philippe Pétain as the representative of France. During the Yalta Conference of February, 1945, the Allies anticipated the defeat of their enemies, the French state among them, and enacted sanctions against them. Stalin, making a toast at a closing banquet, announced that he wanted all the officers of the defeated French Army to be shot and the segment of the French electorate of voting age at the moment of the Franco-German armistice to be disenfranchised. Thanks to intense political and military maneuvering, Charles de Gaulle succeeeded in reversing these courses of action. He ended up attaining from the three powers the recognition of the Provisional Government of the French Republic as the sole representative of France. It was by this means that France became recognized as one of the victors of WWII thereby acquiring a permanent seat on the Security Council of the United Nations.

The position of François Hollande, in addition to insulting the memory of all those who gave their life to liberate our country, has important consequences in international politics. If the Republic is guilty of the crimes of the French state, it would follow, for example, that we should pay indemnities as our German friends have done to the state of Israel and, in addition, renounce our permanent seat on the Security Council.

The point of commonality between the François Hollande’s two speeches is obvious for all to see. As the advocate of "humanitarian intervention", he rehabilitates Ferry’s use of the school to create not critical citizens but obedient students. An alumnus of ENA, he rehabilitates the functionnaries who, betraying the country, rallied to a puppet government and submitted to the authority of the Occupation. A Socialist, he rehabilitates those Council members of his party who validated the armistice, voted full powers to Philippe Pétain and participated in the overthrow of the Republic. All naturally accompanied by grandiloquent condemnations of the consequences of this same policy : colonialism and racist anti-Semitism.

François Hollande is a cultivated man who perfectly measures what he says. He is simply putting the final touch on the enterprise of demolishing the French nation, in perfect continuity with his predecessor.

To subjugate the states of the periphery, the global empire is attempting to destroy those nations by force. To subjugate the states of the center, it acts with greater gentleness, by diminishing their sovereignty and the nation itself. In order to "remodel Europe" it implants the ideology of which both Sarkozy and Hollande are the conveyors, that of the Old Regime, which still holds sway in the Anglo-American states and which has become that of the empire.

For them, France is a historical community of shared language and culture. It has therefore an ethnic basis. New arrivals must modify their identity to assimilate. On the contrary, for French Revolutionaries, France embodies a common destiny shared by the inhabitants of the French territory by dint of their collective overthrow of tyranny. France is a juridical compact within established boundaries and one becomes French by virtue of his acts and by commitment to that project. Of course the Revolution of 1789 did not erase the past and the French Republic must assume responsibility for its legacy, both its glories and its ignominies, but it did not thereby become guilty of the crimes of those that betrayed it.

In his two speeches, François Hollande has told us that he does not intend to defend our sovereignty but instead wishes to condition our children and to collaborate with the United States in its bloody "humanitarian" adventures .