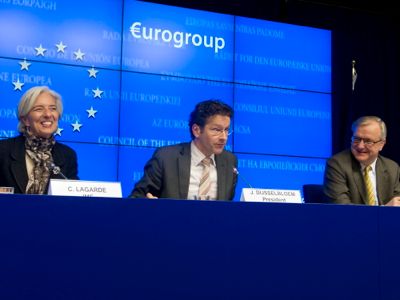 Washington was quick to use the financial crisis in Cyprus to implement a strategy for capturing capital described three weeks ago in these columns [1]. With the help of the Managing Director of the International Monetary Fund, US comprador Christine Lagarde, the American leadership challenged the inviolability of private property in the European Union and attempted to confiscate a tenth of bank deposits, supposedly to bail out the Cypriot national bank affected by the Greek crisis.

It goes without saying that the stated purpose is but a pretext and, far from solving the problem, this confiscation, if it were to be implemented, would only make matters worse. Threatened, the remaining capital would flee the island causing the collapse of its economy.

The only real solution would be to cancel the debt, while anticipating revenues from the development of Cypriot gas. It would be all the more logical given that cheap gas would kick-start the European Union’s economy. But Washington has decided otherwise. Europeans are asked to continue to purchase their energy at high prices in the Middle East, while the cheap gas is made available to fuel the Israeli economy.

To hide the decision-making role played by Washington, this bank hold-up is not presented as a requirement of the IMF, but as that of a troika including the EU and the ECB. In this perspective, confiscation would replace devaluation, rendered impossible due to Cyprus’ euro zone membership. Except that the devaluation would not be a policy of Nicosia, but a diktat from the head of the ECB, Mario Draghi, the former European director of Goldman Sachs, which is precisely the main creditor of Cyprus.

Ms Lagarde, former legal adviser to the U.S. military-industrial complex, does not seek to harm Cyprus, but to panic European-based capital and direct it to Wall Street so that it may revive U.S. finances. Why pick on this island? Because it is one of the few tax havens remaining within the European Union and because the deposits there are mainly Russian. Why do it now? Because the Cypriots made the mistake of electing US comprador Nikos Anastasiades for their new president. Thus they followed in the footsteps of the Greeks who, victims of the same American mirage, had elected as Prime Minister the Amercian comprador, Georgios Papandreou.

This little cook-up, however, went wrong. The Cypriot parliament voted unanimously against the confiscatory taxation of bank deposits. There is an apparent paradox there. The Liberal government wants to nationalize one-tenth of capital while the Communist Parliament defends private property. That is because this nationalization would not profit the national community, but rather international finance.

And so friendly advice has been replaced by threats. There is talk of excluding Cyprus from the eurozone if the people’s representatives persist in their refusal. However, this is hardly possible. The treaties were designed so that the eurozone is a one-way journey. It is not possible to leave on one’s own, or to be excluded, unless you leave the European Union.

Moreover, this option, which had not been foreseen by the racketeers, is feared by Washington. If the island left the Union, it would be bought again for ten billion by Moscow. It would be the worst example: a state area of western influence joining the Russian sphere of influence, in every way contrary to what we have seen since the fall of the USSR. It would surely be followed by the other Balkan states, starting with Greece.

For Washington, this doomsday scenario must be avoided at all costs. A few months ago, it was enough for the State Department to raise an eyebrow for Athens to renounce the selling of its energy sector to Moscow. This time, all means, even the most anti-democratic, will be used against Cypriots if they resist.

Russia feigns disinterest. Vladimir Putin has ignored advantageous investment offers that have been made by the Anastasiades government. This is because he does not intend to save the Russian oligarchs who had stashed their money on the island, nor the European Union who had helped them to organize their tax evasion. Behind the scenes, he negotiated a secret agreement with Angela Merkel which should allow a financial solution to the crisis, but which should also lead to a broad challenge to European rules. Incidentally, the Tsar has gleaned astonishing information about the amazing Russian investments in the island during the Medvedev era; information that could be used as a supplementary means to pressure the fickle Russian Prime Minister.

The UN fails to acknowledge the occupation of Cyprus

Building Totalitarianism in Europe – The Last Coup of Victoria Nuland