What Italy has to really be ashamed of

A boat of migrants, mostly Eritreans coming from Libya, sank off the island Lampedusa. 155 passengers survived while about 300 others perished. Following the Pope’s remarks, Italy was moved by this tragedy and declared a national day of mourning. However — as observes Manlio Dinucci — before succombing to the tides, these migrants were the victims of the policies and wars perpetrated by the West. 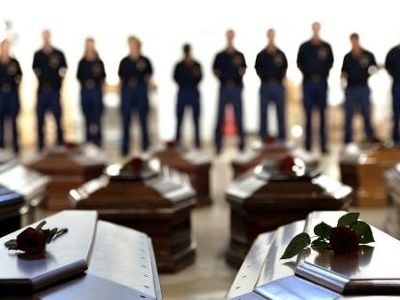 "Shame and horror": these are the terms President Giorgio Napolitano used about the tragedy of Lampedusa [where more than 300 Africans died when their boat sank]. More properly these words should be used to characterize Italy’s policy towards Africa, particularly Libya, which is where the barge of death came from. The rulers who today are beating their breasts are the same ones who have contributed to this and other tragedies involving the migrants.

Earlier, on December 29, 2007, the Romano Prodi government had signed the Agreement with Libya’s Moammar Gadfafi "against the flow of illegal migration." Then on February 4, 2009, the Berlusconi government perfected this policy with a protocol to implement it. The agreement provided for joint maritime patrols off the coast of Libya and to supply to Libya, in agreement with the European Union, a system of military control of the land and sea borders. For this purpose it established an Italian-Libyan Joint Operational Command. Gadhafi’s Libya thus was made the outer border of Italy and the EU to block the migratory flows from Africa. Thousands of sub-Saharan African migrants, stranded in Libya by the Rome-Tripoli accord, were forced to go back to the desert, many condemned to certain death, without anyone in Rome expressing shame and horror.

Then an even more shameful page was turned: That of the war against Libya. It was waged to dismantle a nation-state that, despite the extensive guarantees and openings to the West, could not be totally controlled by the United States and the European powers. Libya retained control of its energy reserves by granting only restricted profit margins to foreign companies, investing abroad its sovereign wealth funds amounting to more than $150 billion and financing the African Union. Libya was attacked because it created independent economic organizations — the African Investment Bank, the African Central Bank and the African Monetary Fund. Thanks to a trade surplus of $27 billion per year and a per capita income of $13,000, Libya before the war was where the standard of living is highest in Africa, despite the disparities, and the World Bank itself praised Libya for its "optimal use of public funds, using them also to favor the poorer social strata." In doing this Libya provided work for about 1.5 million African immigrants.

When the U.S.-NATO war against Libya began in March 2011 (in which they deployed 10,000 air attack missions and infiltrated armed commandos), President Napolitano assured us that "we are not at war" and Enrico Letta, deputy secretary of the Democratic Party, declared that "the warmonger is someone who is against the international intervention in Libya and certainly not us, who are the peacemakers." The first victims of this "Peace" were the African immigrants in Libya, who were persecuted and forced to flee. [1]

Nearly 250,000 wound up in Niger alone after losing their source of income that kept millions of people alive. Many, driven by desperation, are trying to cross the Mediterranean to Europe. Those who lose their lives trying are also victims of the war commissioned by the West’s leaders. The same rulers are now driving the war in Syria, which has already created more than 2 million refugees. Many of these refugees are already trying to cross the Mediterranean. If their boat should sink too, there is always a Letta around ready to declare national mourning.