The initiatives of the new Iranian president, Sheikh Hassan Rohani, have largely strayed from Imam Khomeini’s anti-imperialist line. It appears that the Supreme Leader, Ayatollah Ali Khamenei, who had favored the election of Rohani, decided today to sabotage the agreement Rohani secretly negotiated with the United States and the European Union. Washington does not see it that way and is preparing its "Plan B". 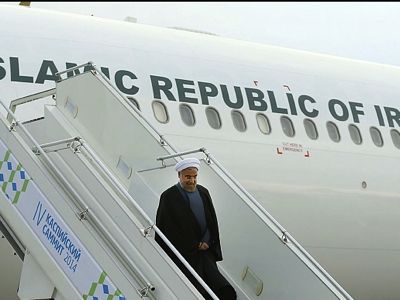 According to Ali Shariati, the thinker of the Iranian Revolution, every Muslim must be revolutionary and all genuine revolutionaries should be considered Muslim, regardless of their religion. Therefore, the term "Islamic Republic of Iran" can be understood as "Revolutionary Republic of Iran"; an interpretation being fought by the representative of the pro-US faction of the Shiite clergy, Sheik Hassan Rohani.

Since the Khomeini revolution, Iran has supported all anti-imperialist movements in the Middle East, regardless of the religion of their members. However, this policy was strongly contested by the "Green Revolution" of 2009. At the time, the "modernist" candidate Mirhossein Moussaoui, said during his election campaign, while welcoming the resistance of Hamas and Hezbollah, that it was not for the Iranians to pay for their equipment or for the reconstruction of Palestine and Lebanon. Once elected, in 2013, the new President Sheikh Hassan Rohani intrigued commentators by brandishing a key and hinting that he would put the Iranian Treasury at the service of his people rather than fund risky Resistance movements of which some were not even Shiite. However, the Iranian people paid little attention to this controversy, erroneously considering it as politicking.

Upon his election, Sheikh Rohani raised great hope in his country, voters being convinced that he would reach an agreement with the United States and the European Union that would end the "sanctions" and improve their purchasing power. Today, Iran has regained the ability to sell its oil on the international market and so has foreign currency at its disposal. The national currency, the rial, has now stabilized.

We now come to the dénouement: Sheikh Rohani secretly negotiated an agreement with Washington and Brussels which he should soon make public [1]. And this agreement goes much further than Hossein Moussaoui’s proposal of five years ago. It, no more no less, swings Iran into the Western camp, despite its recent entry into the Shanghai Cooperation Organization.

Under this deal, Iran would deliver its gas to the European Union. In this way, the latter could free itself from its dependence vis-à-vis Russia and launch a new Cold War. In addition, this gas would not be available to China for its development [2].

On September 24, Sheikh Rohani talked about it with his Austrian counterpart, Hans Fisher, on the sidelines of the General Assembly of the UN; Austria assuring the management the Nabucco pipeline project. The two men discussed financing the connecting of Iranian gas and oil fields, the cost of which is expected to reach $ 8.5 billion. A mega-project which should generate a lot of corruption.

The deal is expected to conclude the controversy over the alleged bomb which, since the election of Mahmoud Ahmadinejad in 2005, Iran was supposed to have had in "a few weeks". [3]

The conflict between pro-US and anti-imperialists

Contrary to a simplistic idea spread by Atlanticist propaganda, the Islamic Revolution was not made ​​with the Shiite clergy, but against both it and the Shah. Even the clergy described the Ayatollah Khomeini as "schismatic" until it followed the popular movement and eventually went along with the imam. Relations between the revolutionaries and the clergy soured again during the war imposed by Iraq at the time, the Guardians of the Revolution-including Mahmoud Ahmadinejad- noticing that the children of the clergy were absent from the front.

For centuries, the Shiite clergy has used and abused its power in Iran. The Revolution of Ayatollah Ruhollah Khomeini was as much a reform of Shiism as a struggle for national liberation. Before him, the Iranian Shia cried a lot at the death of Imam Ali, with him, they tried to imitate him and to fight injustice.

In terms of manners, if all defend the same principles, they do not in the same way: both the clergy (including Sheikh Hassan Rohani who is now the representative) and the "Forces of the Revolution" (represented in particular by the Larijani’s brothers) are in favor of coercion, while anti-imperialists (of which Mahmoud Ahmadinejad is the leader) advocate the value of being an example. Thus, Ahmadinejad clashed with morae police during his terms of office, and publicly took a stand against the compulsory wearing of the veil for women and the strong recommendation of beards for men. The conflict became so acute that the President’s office employees were arrested and imprisoned for several months for "sorcery" (sic).

The Supreme Leader, Ayatollah Ali Khamenei, who is a prime disciple of Ayatollah Ruhollah Khomeini, has higher powers than the president but can only rarely intervene. In recent years, he tried to limit the initiatives of the turbulent Mahmoud Ahmadinejad and force him to maintain his alliance with the Larijani brothers. Ahmadinejad then butted heads with him, especially about his choice of Vice President Esfandiar Rahim Mashaei, finally returned to the rank of Chief of Staff to the President. Ultimately, the alliance between Larijani and Ahmadinejad has broken in a deleterious atmosphere of corruption charges [4]. 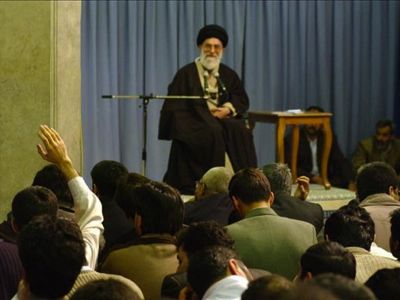 The Supreme Leader favored the election of Sheikh Hassan Rohani hoping for a pause in the confrontation with Washington. He now considers that the new president has crossed the yellow line and threatens the revolutionary ideal.

More than a year after his election, the popularity of Sheikh Rohani is plummeting, public opinion divided between those who accuse him of not having changed much and those who accuse him of promoting a social class at the expense of the majority. Upon the evidence, if Mahmoud Ahmadinejad was allowed to run in the next presidential election, he would be elected in the first round. However, it is doubtful that the opportunity will present itself. In 2013, his candidate, Esfandiar Rahim Mashaei, was forbidden to compete, while polls gave him victory in the second round. Everything will be done to rule out Ahmadinejad’s election in 2017.

Anyway, the former president has never been so active as today. He is mobilizing his camp and seems certain to prevent Iran’s tilting to the Atlanticist camp. As a sign of his probable victory, the Supreme Leader has allowed his supporters to organize an anti-imperialist international conference which he opposed last year [5]. Ayatollah Ali Khamenei has even had himself represented. So he should veto the Rohani project.

For the followers of Khomeini, the project would be equal to destroying the Revolution and returning to the days of the Shah. Iran would abandon its political influence and be dedicated to international trade. Domestically, it would again mean opulence for leaders, but not necessarily for the people. In passing, the people of the Middle East who have made gains over Washington, London and Tel Aviv, mainly in Lebanon, Gaza, Syria, and Yemen, would again gradually become orphans and destitute.

In the likely event – barring the premature death of the Supreme Guide – of the failure of the Rohani plan, Washington continues to prepare its "Plan B": a vast destabilization of the country, far more powerful than that of 2009. At the time, the idea was to lead people to believe in a rigging of the presidential election which would otherwise have been won by the pro-US side. [6] This time, there should be a remake of the Syrian pseudo-revolution of 2011.

Over the past five years, Washington has created and is creating more than 70 satellite TV stations in Farsi language, though that language has only about 100 million speakers worldwide, of which 80 million are in Iran. Each ally of the United States was sollicited from the European Union to South Korea, to broadcast programs for Iranians. If all these media were broadcasting a false report at the same time, it would seem certain to Iranians, many of whom have turned away from national television, judged as being too militant or too puritanical.

Furthermore, nobody knows who is in charge of Internet censorship in Iran. To prevent the spread of pornography, all videos are inaccessible and a quantity of sites also. However, every Iranian has adopted a proxy that allows him to bypass censorship. The only result of this practice is to discredit the State; a situation that the United States will not fail to exploit.

Therefore, one can predict that in the event of the fall of Sheikh Hassan Rohani, Washington will launch false news that the public will believe. With digital techniques, it is possible to display fictional current events, as has been experienced in Libya (with the fall of the Libyan Jamahiriya aired four days in advance to demoralize the population) and in Syria (with the many protest events that everyone has seen but which never existed).

The rejection of the Rohani project will therefore only give the signal for a new confrontation.

[5] The New Horizons conference was held from 29 September to 1 October 2014 in Tehran in an atmosphere of national unity. Ayatollah Abbas Hosseini Qaem-Maqami, Saeed Jalili (which stood for president against Hassan Rohani) and Mohammad-Javad Larijani attending its opening.