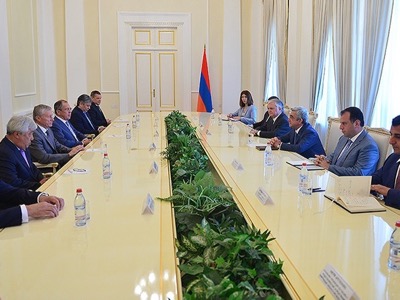 The Ministers of Foreign Affairs of the member states of the Treaty on Collective Security (Armenia, Belarus, Kazakhstan, Kyrgyzstan, Federation of Russia, Tajikistan) reaffirm their support for:
• The sovereignty, unity and the territorial integrity of the Syrian Arab Republic;
• The prompt eradication of the threat of terrorism; and
• Ending the armed conflict using all political and diplomatic means through extensive dialogue free of condition precedents and foreign intervention.

The Parties take note of the efforts of the Co-Chairs of the International Syrian Support Group (ISSG) to guarantee and reinforce the cessation of hostilities and to promote settling the Syrian crisis by peaceful means. They call for a united front to fight international terrorism and extremism in the country with the UN Security Council playing a key role.

The member states of the CSTO declare once again that they support the fortified efforts of the international community including those seeking to create necessary and reliable conditions by blocking channels for financing terrorism.

The Ministers of Foreign Affairs emphasized the effectiveness of negotiations between the authorities of the Syrian Arab Republic and a broad spectrum of the Syrian opposition at Geneva, under the auspices of the United Nations, in the interest of the Syrians who determine the future of their country.

The member states of the CSTO have expressed their deep concern over the development of the humanitarian situation in Syria. They emphasize the need for sustainable humanitarian access to the populations affected, in accordance with international humanitarian law and to end the unilateral sanctions harming the country’s economy.