Myanmar’s view of the Rohingya situation 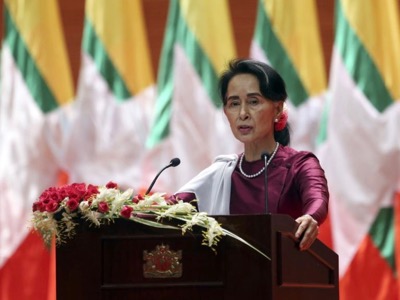 I have the honour to refer to the letter dated 31 May 2018 addressed to me by the President of the Security Council for the month of May in an effort to continue constructive and collaborative dialogue with Myanmar in finding a durable solution to the humanitarian situation in Rakhine State. I have brought the matter to the attention of the leadership of the Government of Myanmar, as requested.

I am now taking the liberty of writing the present letter to update you on recent developments and concrete steps taken by the Government of Myanmar in three specific areas identified in the letter under reference, namely humanitarian access, accountability for alleged human rights violations and implementation of the recommendations of the Advisory Commission on Rakhine State.

Moreover, the ongoing activities of the relevant United Nations agencies and international organizations in Rakhine State, including their travels within the State, are being facilitated by the Rakhine Coordination Committee in accordance with the provisions of respective memorandums of understanding with the government ministries concerned.

One significant development is the signing of a memorandum of understanding between the Government of Myanmar and two United Nations agencies, the Office of the United Nations High Commissioner for Refugees and the United Nations Development Programme, on 6 June 2018. It has opened the way not only for assisting in different stages of return and resettlement in the repatriation process, but also for enhancing humanitarian assistance and livelihood opportunities for the returnees, as well as for all communities in Rakhine State. The tripartite memorandum of understanding establishes a framework for cooperation aimed at supporting Myanmar to create conditions conducive to the voluntary, safe and dignified return of the displaced persons and to promote resilience-based recovery and development for the benefit of all communities in Rakhine State.

With regard to the accountability issue, the Government of Myanmar has repeatedly stated that it will not condone any human rights violations and will take action against perpetrators in accordance with the law when allegations are supported by sufficient evidence. In some cases, such as in the Inn Din village incident, perpetrators, including members of security forces, have already been brought to justice. The recent revelation of the massacre of 99 innocent ethnic Hindus, committed by the Arakan Rohingya Salvation Army on the same day as their attacks on 30 police outposts, has unmasked the true face of the Army, which must also be held accountable and should not go unpunished.

The current crisis in Rakhine was ignited by the unprovoked attacks of Arakan Rohingya Salvation Army terrorists and affected not only the Muslim community, but also Hindus and other ethnic minorities. We need to protect the human rights of all communities and provide security not only for Muslims and Rakhines, but also for Hindus and other communities. The current round of violence in Rakhine has rapidly morphed from communal tension into an issue of terrorism that threatens Myanmar’s national security and sovereignty.

Another significant step taken by the Government is the announcement by the Office of the President, on 31 May 2018, of the Government’s decision to establish an independent commission of enquiry as part of its national initiative to address reconciliation, peace and stability and development in Rakhine State. The commission will look into allegations of human rights violations and related issues following the terrorist attacks by the Arakan Rohingya Salvation Army. The Government is in the process of selecting candidates for the commission, which will comprise international and national personalities who will be assisted by experts. The Government is fully committed to taking legal action against all violations committed on Myanmar’s soil.

Recommendations of the Advisory Commission on Rakhine State

The Advisory Commission on Rakhine State was set up by the Government of Myanmar on its own initiative to seek a long-lasting solution to the complex challenges in Rakhine State even before the first attacks of the Arakan Rohingya Salvation Army, on 9 October 2016. The Government made a statement on 24 August 2017 welcoming the Commission’s final report and pledged to implement its recommendations to the fullest extent possible, depending on the situation on the ground. A ministerial-level committee was assigned for the implementation of the recommendations of the Advisory Commission, and an advisory board to the committee, comprising prominent international members, was established. The committee has submitted quarterly reports to the public on the progress of implementation and has already implemented more than 50 reports out of a total of 88 recommendations and has started on some 30 more.

The advisory board to the committee has also given its initial opinions, aimed at the effective implementation of the recommendations. Some of the board’s key recommendations, such as the establishment of an independent commission of enquiry and the seeking of assistance from United Nations agencies in the implementation of the arrangement of repatriation agreed between Myanmar and Bangladesh, have already been implemented.

We also share your concern over the suffering of the displaced people who have been exploited for the pernicious and ruthless strategy of the Arakan Rohingya Salvation Army terrorist group. The reported number of displaced persons who left for the Bangladesh side is much inflated, as the real figure cannot be higher than half a million. Myanmar has made every effort to create an environment that is conducive to the early return of displaced people in accordance with the arrangement on the return of displaced persons from Rakhine State, signed on 23 November 2017 between Myanmar and Bangladesh. To expedite repatriation, a list of 1,222 persons, including Hindus and Muslims, verified as residents of Myanmar, was handed over to the Bangladesh side in January 2018.

As of 22 June 2018, Myanmar handed over to Bangladesh, in total, 1,788 names of those verified as residents of Myanmar from the list of 8,032 persons presented by Bangladesh in January 2018. However, Bangladesh has not sent back a single returnee to date. We would, therefore, like to seek the support of the Security Council to urge Bangladesh to start to implement the bilateral agreement and to allow those verified displaced persons to return without delay, as agreed bilaterally in the arrangement on the return of displaced persons from Rakhine State.

Last May, 62 displaced persons returned from their camps in Cox’s Bazaar of their own volition. They were transported to the Hla Phoe Khaung transit centre after going through the verification process necessary at the Nga Khu Ya reception centre. The Minister for Social Welfare, Relief and Resettlement visited Hla Phoe Khaung to meet the returnees and explained the resettlement and national verification process to them and provided the aid and assistance necessary.

On 11 June 2018, a wrecked boat with 104 displaced persons from Cox’s Bazaar on board was stranded ashore in Yathedaung Township. Those from camps in Cox’s Bazaar have been accommodated at the transit centre and given humanitarian assistance. In the interest of expediting the repatriation process, I would like to underline the urgent need for the widest possible dissemination of information on the repatriation process among displaced persons in Bangladesh and for the use of the agreed form for compiling information on prospective returnees.

I would also like to take this opportunity to highlight the security aspect of the process of implementing the Myanmar-Bangladesh bilateral agreement on voluntary, safe and dignified return. As you are aware, the unprovoked and premeditated multiple attacks on police outposts on 25 August 2017 was the root cause of the current humanitarian crisis in Rakhine State. The threat of Arakan Rohingya Salvation Army terrorists remains real and present today. They continue to intimidate and kill those who advocate the return of displaced persons. In order to ensure safety and security for all communities in Rakhine, there is an urgent need for Bangladesh and other stakeholders to cooperate strongly to prevent and secure threats posed by the Arakan Rohingya Salvation Army.

We are committed to the bilateral solution to the humanitarian problem affecting the two countries in a spirit of mutual respect, sincerity and good neighbourliness. It is absolutely necessary to build trust between Myanmar and Bangladesh if we are to achieve our common objective of a peaceful solution to this issue. We should avoid any provocative action that may cause misunderstanding and escalate tension that could be detrimental to the implementation of the repatriation process.

In this regard, I wish to bring to your attention the fact that Bangladesh has built overhead bunkers on its side of the border between boundary pillars Nos. 34 and 35, in violation of the boundary demarcation treaty of 12 November 1998, which prohibits the building of any structure within 150 feet of the border line. We reiterate our call upon Bangladesh to remove the said structures in compliance with the boundary treaty and to allay misunderstanding between the two countries.

Cooperation with the Special Envoy of the Secretary-General on Myanmar

Cooperation with the United Nations is one of the tenets of Myanmar’s foreign policy. The State Counsellor issued a statement on 1 May 2018, following the visit of Security Council members to Myanmar, reiterating the Government’s commitment to working in partnership with the United Nations in dealing with the many serious challenges facing the country. In this spirit, the Government of Myanmar facilitated the first official visit of the Special Envoy of the Secretary-General on Myanmar, Christine Burgener, from 12 to 21 June 2018. Myanmar has agreed to the proposed opening of her office in Nay Pyi Taw and invited her to take part in the forthcoming Union Peace Conference. Myanmar looks forward to maintaining a constructive and fruitful relationship with the Special Envoy in our efforts to deepen the partnership with the United Nations in addressing the complex challenges confronting the country.

As a country faced with the challenges of completing the transition to a fully functioning democratic State, Myanmar appreciates the understanding and support of the international community.

In its efforts to achieve national reconciliation and peace, democracy and development, the Government of Myanmar is happy to engage constructively with the United Nations. I believe that the United Nations can help Myanmar to find a comprehensive and durable solution to this humanitarian issue.

I would highly appreciate it if the present letter could be circulated among the members of the Security Council as a document of the Council.

Permanent representative of Myanmar to the United Nations (since 2016).