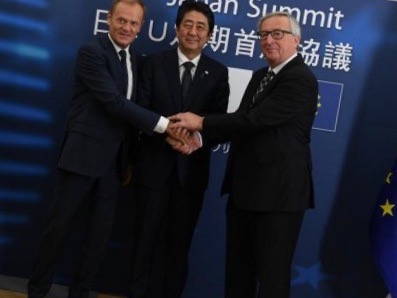 We, the leaders of the EU and Japan, reaffirm the strength of our Strategic Partnership and our resolve to work together for peace, prosperity and the rules-based international order. We remain united by our common values of democracy, human rights and the rule of law, and by our determination to promote together a free, open and fair global economy that benefits everyone.

Today marks a historic step as we celebrate the signing of a highly ambitious trade agreement between two of the world’s largest economies. In giving full effect to this agreement, the EU and Japan are sending a powerful message to promote free, fair and rules-based trade, and against protectionism. The Economic Partnership Agreement demonstrates to the world the firm political will of the EU and Japan to keep the flag of free trade waving high and powerfully advance free trade. Moreover, the Agreement will be the model of high standard, free, open and fair trade and investment rules in the 21st century. The Agreement will also deliver sustainable and inclusive economic growth and spur job creation. The Agreement demonstrates to the world - and to our citizens - that free, fair and rules-based trade remains an important tool to promote prosperity in our societies and globally. Furthermore, the EU and Japan will continue their negotiations on investment rules.

The signing of the Strategic Partnership Agreement will set the stage for even stronger collaboration both bilaterally and in multilateral fora. It will enrich the political dimension of our relationship and allow for deeper cooperation in a broad range of sectors, notably with regard to peace and security, migration, the fight against terrorism, energy, climate change, education, research and innovation, and development.

We underline the crucial role of the rules-based multilateral trading system with the World Trade Organization (WTO) at its core and continue to fight protectionism. We commit to modernize the WTO to improve the efficiency and function of its negotiating, monitoring and dispute settlement functions. We reaffirm the conclusions of the Charlevoix G7 Summit. As decided at the Charlevoix G7 Summit and at the Trilateral Meeting of the Trade Ministers of the European Union, Japan and the United States, we will work together to enforce existing international rules and develop new rules, to foster a truly level-playing-field, addressing in particular non-market oriented policies and practices, and inadequate protection of intellectual property rights such as forced technology transfer or cyber-enabled theft. We call for the start of negotiations to develop stronger, international rules on market-distorting industrial subsidies and trade distorting actions by state-owned enterprises. The EU and Japan will also continue to drive progress on the follow-up work from WTO’s 11th Ministerial Conference in Buenos Aires, including exploratory work among like-minded members on e-commerce.

We reaffirm our strong commitment to implement the Paris Agreement, through ambitious climate action, in particular through reducing emissions while promoting innovation, climate finance, development of sustainable energy technologies, and improvement of energy efficiency so as to reach a global carbon-neutral economy over the course of the second half of the century. We also had good and constructive discussions on foreign and security policy issues. We confirmed common interests and concerns. We affirmed our intention to contribute jointly to international peace and stability based on the rule of law and through intensified consultation and coordination on global and regional issues, including our joint support for the Iran/Joint Comprehensive Plan of Action and our shared commitments to addressing the issues of North Korea, Ukraine and Russia, maritime security, including the South and East China Seas, and non-proliferation of weapons of mass destruction, based on the Strategic Partnership Agreement signed today.

In our bilateral relations, in addition to the two landmark agreements signed, we endorse the establishment of a EU-Japan High Level Industrial, Trade and Economic Dialogue between Minister of Economy, Trade and Industry, Mr. Hiroshige Seko and Minister for Foreign Affairs, Mr. Taro Kono, as co-chairs on the Japanese side, and the European Commission’s Vice-President for Jobs, Growth, Investment and Competitiveness, Mr. Jyrki Katainen, in close cooperation with relevant Ministries and Directorate-Generals, the first meeting of which was decided to be held by the end of this year.

We also welcome that the first EU-Japan Policy Dialogue on Education, Culture and Sport between Dr. Tibor Navracsics, European Commissioner for Education, Culture, Youth and Sport, and Mr. Yoshimasa Hayashi, Minister of Education, Culture, Sports, Science and Technology of Japan was held in Budapest on July 6th 2018. We affirmed that their launching of the new joint call for joint master programmes between European and Japanese Universities will bolster educational exchanges for future generations.

We welcome the Joint Statement by Ms. Věra Jourová, Commissioner for Justice, Consumers and Gender Equality of the European Commission and Mr. Haruhi Kumazawa, Commissioner for Personal Information Protection Commission of Japan and the conclusion of the talks paving the way for a simultaneous finding of an adequate level of protection by the EU and Japan. The mutual adequacy finding will enhance the benefits of the EPA by creating the world’s largest area of safe data transfers through such mutual adequacy finding based on a high level of protection of personal data. Now each side will launch its relevant internal procedures.