The Western powers are moving inexorably towards Internet censorship, thereby facilitating the dissemination of propaganda and war indoctrination in their countries. In this context, an extremely violent tension is tearing apart the international scene. Aware of the increasing risk of general confrontation, Moscow is attempting to find credible interlocutors in the UNO and the United States. What is happening at the moment has seen no equivalent since 1938, and could degenerate in the same way. 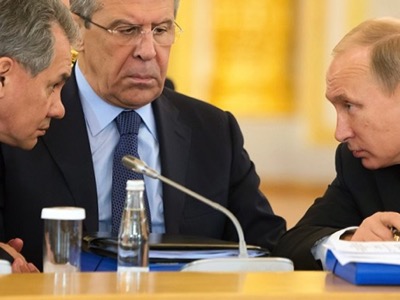 During a Press conference in Moscow, on 20 August, the Russian Minister for Foreign Affairs, Sergueï Lavrov, denounced the instructions issued by the General Secretariat of the UNO to all their agencies, forbidding them to participate in any manner whatsoever in the reconstruction of Syria.

He was referring to a document entitled Parameters and Principles of UN Assistance in Syria, drawn up in October 2017 by the Director of Political Affairs and number 2 of UNO at the time, Jeffrey Feltman [1].

We can read the specific instructions - « The UN will be ready to assist in the reconstruction of Syria only when a comprehensive, genuine and inclusive political transition, negotiated by the Syrian parties in the conflict, is firmly under way ».

This text is contrary to the objectives of the United Nations, but defended by its General Secretariat. None of the member states of the UNO were ever involved in its composition, nor even informed of its existence. It corresponds to the point of view of the governments of the United Kingdom and France, but not that of the United States.

As far as I know, this is the first time that a member state of the Security Council has ever questioned an internal political document of the General Secretariat. Yet the problem is not new. At the end of 2015, Russia learned about a group of internal UN documents known as the « Feltman Plan for Syria » [2]. This concerned a detailed project for the total and unconditional capitulation of the Syrian Arab Republic, even more drastic than the plan imposed on Japan by General McArthur [3].

Moscow then found itself in a very delicate situation. If it made these documents public, the credibility of the UNO in the service of peace would have been destroyed, and Russia would have had to propose new intergovernmental institutions to replace it. Vladimir Putin prudently decided to keep it secret, and to negotiate with Barack Obama to save the UNO.

However, in practice, nothing had changed - Feltman was removed from his functions by Guterres and then produced another document intended to sabotage peace. Today he has been replaced by his US compatriot, Rosemary DiCarlo, who has not invalidated his instructions.

This time, Russia will not accept excuses and delaying tactics. But is Guterres DiCarlo’s effective superior, or is there a double hierarchy within the UNO, one of them public and favourable to peace, and the other hidden and pushing for war?

At the beginning of the Cold War, the United States thought about how they would be able to survive a Soviet atomic attack which would have killed their President and parliamentarians outright. President Eisenhower therefore nominated a phantom government tasked with ensuring continuity in case such an attack should occur. This secret entity was renewed periodically by his successors and still exists today.

For eighteen years, I have been defending the thesis according to which the United States are no longer governed by their President and Congress, but by this replacement entity. Basing my work on official US documents, I interpreted the attacks of 11 September 2001 as a coup d’etat operated by this unelected authority. Fearing that I am contesting the democratic ideal, my critics have rejected my work in its entirety, without really discussing it nor even reading it.

We may believe that after George Bush Junior’s second mandate and that of Barack Obama, this debate has become obsolete. And yet, during his electoral campaign, Donald Trump denounced the existence of this « deep state » which, according to him, no longer serves the interests of the people, but those of transnational Finance.

Of course, no foreign state has ever taken a public stand about a question which concerns the interior politics and the sovereignty of the United States. Except that last week, President Vladimir Putin took steps in this direction. On 22 August - in other words two days after the public intervention of his Minister for Foreign Affairs against the UNO – while commenting Washington’s sanctions against his country, he declared - « And it is not only the position of the President of the United States which counts. It’s the position of the institution which pretends to be the state, the ruling class in the wider sense of the term. I hope that the realisation that this policy has no future will one day become clear to our partners, and that we will then be able to cooperate in a normal fashion » [4].

Yes, you have read that correctly. President Putin is stating that the United States are governed not by one Power, but two. The first is composed of the elected members of Congress and the Presidency, the second is illegitimate and sometimes more powerful.

In the space of two days, the Federation of Russia called into question the coherence of the United Nations and that of the United States.

Unfortunately, those people who have still not analysed the events of 9/11, nor drawn any conclusions about the wars which followed, are still stuck with the official vulgate. They will probably interpret the Russian position as a machination aimed at destabilising the Western democracies.

From Moscow’s point of view, the war of aggression – by the intervention of jihadist proxies – against Syria must cease, and the unilateral sanctions by the US, Canada and the European Union against Russia must be lifted. The problem that we must all now face is not the defence of democracy, but the danger of war.

Void of any legitimacy, a parallel hierarchy in New York and Washington intends to plunge the world into a generalised conflict.

Source : “Russia denounces the diarchy at the heart of the UNO and the USA”, by Thierry Meyssan, Translation Pete Kimberley, Al-Watan (Syria), Voltaire Network, 28 August 2018, www.voltairenet.org/article202622.html

Source : “Russia denounces the diarchy at the heart of the UNO and the USA”, by Thierry Meyssan, Translation Pete Kimberley, Al-Watan (Syria) , Voltaire Network, 28 August 2018, www.voltairenet.org/article202622.html