While the Hindu government of Narendra Modi seemed to be moving closer to the United States, India has just bought five billion dollars worth of S-400 Triumph anti-aircraft missiles. This return to the historic alliance with Moscow corresponds to the the evolutions presently under way in Europe, particularly in Hungary and Turkey. For General Vinod Saighal, who has always supported this option, only a Russo-Indian military alliance coupled with economic cooperation with China can guarantee peace in Asia. 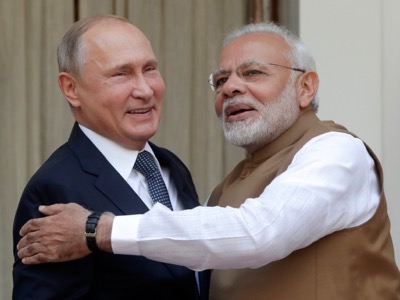 For several months prior to the finalising of the defence deal that was signed in New Delhi on 4 October 2018 there were apprehensions in several quarters whether the deal would be signed or not. The threat of CAATSA (Countering America’s Adversaries through Sanctions Act) loomed large. In a sense it still does. Nevertheless both countries took the bull by the horn as the saying goes and the deal was signed. The purchase of the S 400 Triumf air defence missile systems has been effected and delivery will start around 2021-22 as per current estimates. After signing the deal both sides played it down. No fanfare and no mention referring to it in the joint statement. It could not have been more low-key. Earlier the government had conveyed to the US that it respects intellectual property rights and adheres to the contracts linked with other countries. To convey both its concerns and the fact that India was obliged to sign the deal with Russians several high level visits had taken place.

The apprehensions of the government of India prior to the signing have been discussed in the media and various quarters since long. These reached a higher pitch in the build up to the 2-plus-2 meeting in New Delhi between US Secretary of State Mike Pompeo and defence Secretary James Mattis on the US side and ministers Sushma Swaraj and Nirmala Sitharaman the foreign and defence ministers on the Indian side. As reported the negotiations and signing went off smoothly. Among other aspects India was keen for access leading-edge US technologies in the defence, space and allied fields. These should be forthcoming in the coming years all things being equal. However, it has to be appreciated that as in the past there are going to be protracted and often frustrating negotiations before transfers actually take place with several conditionalities that India will find difficult to agree to leading to further negotiations and waivers. During the 2-plus-2 talks the question of India purchasing the Russian S 400 Triumf missiles would certainly have come up with the Indian side forcefully putting across their pleas about the long-standing defence relationship with Russia and the fact that the negotiations had begun far earlier and hence CAATSA waiver should not be made applicable. The growing closeness of the US-India strategic relationship would be a major factor in the waiver. Iran would have also been referred to. However, this paper limits itself to the Russian deal and its wider ramifications that impact many players in the global arena.

The dilemma that India faced was that had it acceded to the US request to not negotiate the deal with Russia and being promised in turn impressive sweeteners of US high-tech as well as latest systems similar to the Russian one. Going through with the Russian deal would have unforeseen consequences for the country should the US decide to turn its back on several other key military-related deliveries in the pipeline as a consequence. It was not an easy decision for the Prime Minister having realized that reneging on the Russian deal under US pressure would considerably lower India’s image in the region and its partners and friends around the world. It would have been a setback from which India would not have recovered for a long time. Most importantly, India’s decade long strategic bonds with Russia would have been sundered. Hardly any country would have trusted India as a reliable partner hereafter. Even countries very close to India like Japan and Vietnam would have had second thoughts. While the difficulties are not yet over India’s standing in the region and beyond has gone up. The countries around India feel reassured, more so in the subcontinent. A few of them attempting to play off one country against other will become more cautious.

While several aspects geopolitical and economic would have been considered by the Prime Minister in the coming years the key consideration would have been the dilemma that the US was facing with regard to India should it decide to go ahead with the deal with Russia. President Trump has already severely mauled it close allies and put on notice practically every major country and player in the world. India was the only major country remaining. Treating India in the same manner seeing its size and importance in the world would have isolated the US to the extent that many in Washington would have been alarmed, to put it mildly. That will hold true for the foreseeable future. Both the US and India realize that the relationship that has been maturing over the years is extremely important to both.

Having dealt with the aspect from the lens of Washington and New Delhi it needs to be remembered that the third party that was the reason for the concerns highlighted above, Russia was viewing the developments with as equal concern as India. For Russia the deal was no less important than India [1]. In the last decade or so and especially after the seizing of Crimea and the tensions in Ukraine caused by the breakaway Russian majority province in the East, Russia has come under major sanctions from the US and its allies in Europe. No matter the brave front that Moscow puts on it Russia is suffering greatly from the sanctions. Its economy seldom robust in recent years since the sharp decline of the oil prices had made its position difficult if not precarious. It had no option but to solidly ally itself with China. This had two results. China’s purchases of Russian oil and gas and advance payments for longer term commitments with the construction of pipelines and committed supplies for 20 years considerably eased Russia’s financial burdens. Additionally together China and Russia could confront the US more boldly, especially the latter. It’s negotiating position and ability to stand up to the US improved considerably once Russia was on its side. This continues to be the case.

There is an even more important aspect relating to Russia that merits consideration. In the coming years its geopolitical as well as geostrategic position could improve towards the West. Many European countries are already looking askance at US unilateral actions. Germany with the Nord Stream pipeline soon likely to come on stream at very high cost cannot allow President Trump to thwart its economic interests that are the strength of Germany and make it a global player. Other countries notably in Eastern Europe notably Hungary are keen to normalize relations with Russia. More countries would stand with Germany and possibly France to arrive at an accommodation with Russia, seeing that Turkey the NATO member with the largest Army has already started spinning away. For its part Russia would have to give cast iron guarantees that it would not again invade the Baltic Republics, Lithuania, Latvia and Estonia. It would further reassure the Scandinavian countries as well adding to greater trade benefits for Russia.

Once Russia is comfortable in the West its gaze will automatically turn towards China. It has become much too powerful and economically stronger for Russia’s comfort in the coming years. Its military strength now moving forward in all dimensions of warfare is causing worries in private circles in Moscow who were never comfortable with the closer relations with China that is already displacing Russia in its backyard in Central Asia. The Belt and Road Initiative with outlays ultimately reaching up to nearly one trillion dollars cannot become economically viable any time soon, if ever. It is more a geopolitical initiative reaching up to countries of Eastern Europe, the fact that is already worrying the Western countries. Russia will be the biggest loser if it is reduced to helplessly watching the way Chinese workers are flooding the countries in between. Some worry and backlash though tentative has started.

Russia’ worries do not end there as its population declines by 2050 to less than 100 million, out of which the Russian population following the Orthodox Russian Church projected as less than 70 million. Other countries in addition to Chechnya and Dagestan could also become more troublesome. Chinese are already demographically eyeing expansion in Siberia and Central Asia, in the latter case on the back of the BRI. Chinese have already started marrying locally in Kyrgystan and in the Republics bordering Xinjiang. Clandestine move into sparsely populated spaces in Kazakhstan and Siberia would be an ongoing process. Planners in Russia are aware of it. In the latter case after taking over as President after the disastrous Yeltsin years on his first visit to the far-eastern province the governor of Siberia reportedly told Mr. Putin that in fifty years the language spoken in his province would largely be Chinese and Korean.

As mentioned in an earlier paragraph the deals made in Delhi during President Putin’s visits in early October 2018 had far deeper geostrategic significance for Russia than the $ 5.43 accruing from the signing of the S 400 Triumf deal. In the coming years India’s power and prestige will continue to grow in the world. India is a very big country on the southern flank of China as viewed from Russia. The apprehensions of expansionist China would continue to be shared by both countries present accommodations necessitated by circumstances notwithstanding. That was the reason that Russia had been insisting with China for several years that India be brought into the SCO as a member going beyond its observer status. Ultimately China acceded to the Russian demand. There were bound to have been trade- offs.

As a last word it is not in the interest of Russia and India to have antagonist relations with China. The same applies for China. The looming planetary decline will demand that these three important countries in the global arena take the initiative from the US to decide on steps necessitated to reverse the decline.

Why is the situation in Pakistan irremediable?
The Assassination of Benazir Bhutto, according to an Indian General