NATO no longer has the same dynamics as it had during the Cold War. But it remains a nuclear military alliance, first against Russia, but now also against China. It works perfectly as shown by the war against Syria up to the US withdrawal and the support to the Sahelian governments up to now. 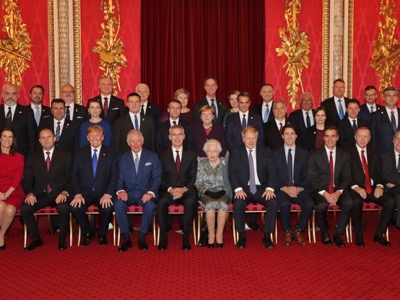 Emmanuel Macron spoke of NATO’s "brain death", others define it as "moribund". Are we therefore facing an Alliance, which, without any more thinking head, is disintegrating under the effect of internal fractures? Disputes at the London Summit seem to confirm this scenario. But we have to look at the substance, the real interests on which relations between the allies are based.

While Trump and Macron wax polemic in front of the cameras in London, in Niger, without too much publicity, the US Army of the US Command for Africa (AfriCom) transports with its cargo planes thousands of French soldiers and their weapons to various outposts in West and Central Africa for Operation Barkhane, in which Paris engages 4,500 soldiers, mainly Special Forces, with the support of the US Special Forces in combat actions as well. At the same time, the armed Reaper drones, supplied by the USA to France, operate from Air Base 101 in Niamey (Niger). From this same base, the Reapers of the AfriCom US Air Force, which are now redeployed to the new 201 base in Agadez in the north of the country, continue to operate with French forces.

The case is emblematic. The United States, France and other European powers, including multinational groups competing for markets and raw materials, are becoming more compact when their common interests are at stake. For example, those they have in the Sahel which is rich in raw materials: oil, gold, coltan, diamonds, uranium. But now their interests in this region, where poverty rates are among the highest, are being threatened by popular uprisings and by the Chinese economic presence. Hence Operation Barkhane, which, presented as an anti-terrorist operation, engages the allies in a long-term war with drones and special forces.

The strongest cement that holds NATO together is the common interests of the military-industrial complex on both sides of the Atlantic. This one has been strengthened by the London Summit. The Final Declaration [1] provides the main motivation for a subsequent increase in military spending: "Russia’s aggressive actions constitute a threat to Euro-Atlantic security". The Allies commit not only to increase their military spending to at least 2% of GDP, but to spend at least 20% of it on arms. This objective has already been achieved by 16 of the 29 countries, including Italy. The United States is investing more than 200 billion dollars in 2019 for this purpose. The results are visible. On the same day as the NATO Summit opened, General Dynamics signed a $22.2 billion contract with the US Navy, extensible to 24, to supply 8 Virginia-class submarines for special operations and Tomahawk missile attack missions, including nuclear warhead missions (40 per submarine).

Accusing Russia (without any evidence) of deploying intermediate-range nuclear missiles and thus burying the INF Treaty, the Summit decides "to further strengthen our ability to defend ourselves with a set of nuclear, conventional and anti-missile capabilities, which we will continue to adapt: as long as nuclear weapons exist, NATO will remain a nuclear alliance". This card includes the recognition of space as the fifth operational field, in other words a very expensive military space programme of the Alliance is announced. It is a blank cheque unanimously given by the Allies to the military-industrial complex.

For the first time, with the Summit Declaration, NATO speaks of the "challenge" arising from China’s growing influence and international politics, emphasizing "the need to confront it together as an Alliance"[1]. The message is clear: NATO is more than ever necessary for a West whose supremacy is now being questioned by China and Russia. Immediate result: the Japanese Government announced that it had purchased the uninhabited island of Mageshima, 30 km off its coast, for $146 million to make it a training site for US fighter-bombers against China.