The United States and numerous media outlets have been outraged by the arrest of Russian multimillionaire and oligarch Mikhail Khodorkovsky last October 25th. However, they have both failed to inform the public opinion about his financial links with the Bush family and his investments in the press. The Russian magnate is an important member of the Carlyle Group, a powerful association specialized in fund management that also administrates the fortunes of the Bush and Bin Laden families. 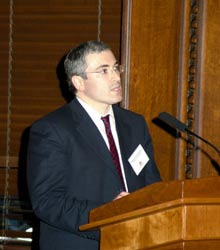 Two Russian businessmen, Platon Lebedev (president of the Menatep banking group, arrested for fraud on July 2, 2003) and Mikhail Khodorkovsky (president of the oil group Yukos-Sibneft, arrested for fraud on October 25, 2003) were members of the administrative manager’s office of the Carlyle Group’s investment funds, as indicated in an editorial by the Washington Post on Monday, November 10, 2003.

The Carlyle Group was founded in 1987 and was then presided over by Frank C. Carlucci (former CIA No. 2 and later US Defense Secretary). Currently, the Carlyle Group is headed by Louis V. Gerstner (former IBM general manager). Other former directors of the group include George Bush Sr. (former CIA Director and later US President), James Baker III (former US State Secretary) and John Major (former British Prime Minister). An investigation article that we already published revealed that this powerful investment funds management institution mainly administrated the fortunes of the Bush and Bin Laden families. 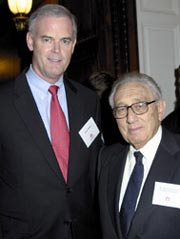 Henry Kissinger (Right), participating in the inauguration of the Open Russia Foundation of Mikhail Khodorkovsky in the United States

Congresswoman Cynthia McKinney (Dem-Georgia) publicly launched a series of questions regarding the benefits of this company after the September 11, 2001, terrorist attacks.

The Carlyle Group has diversified its investments. It has a large presence in the arms business and places eleventh in the list of the Pentagon’s weapons suppliers thanks to all the offices it controls. In April 2003, French politician Dominique de Villepin (see article in French) publicly expressed his concern after The Carlyle Group bought the European association Fiat Avio, which meant a loss of strategic independence for the future of the European defense.

In France, the Carlyle Group owns various properties in Paris and has taken control of the Genoyer association in the city of Vitrolles and also of the group Otor. It also acquired an important share of the Paris daily Le Figaro to later resell it to the French group Dassault, manufacturer of the Mirage fighter jets.

The Hidden Financial Ties between the Bush and the Bin Laden Families.
Who Benefits from Crime?