Lies have shorter and shorter legs. Two months after the change of regime in Kiev, the Polish press has disclosed the role of Donald Tusk’s government in preparing the coup. The new revelations belie Western discourse and demonstrate that the current interim government of Oleksandr Tourtchynov was imposed by NATO in violation of international law. 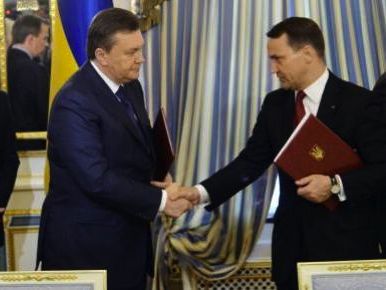 In his capacity as EU negotiator, Radosław Sikorski signed a crisis settlement agreement with Ukrainian President Viktor Yanukovych, in the evening of February 21, 2014. The following morning, the men he had secretly trained in Poland were about to take power.

This article is based on information obtained by the Polish opposition. I erroneously cited as my source the satirical weekly Nie, which published a pastiche mixing truths and non-truths. The data it provides needs to be verified.
In any case, the matter concerning the training of Pravy Sector members has in the meantime been brought before the Attorney General of Poland.
Thierry Meyssan, April 22, 2014.

The Polish left-wing weekly Nie (No) published a startling witness account of the training given to the most violent of the EuroMaidan [1] activists.

According to this source, in September 2013, Polish Foreign Minister Radosław Sikorski invited 86 members of the Right Sector (Sector Pravy), allegedly in the context of a university exchange program. In reality, the guests were not students, and many were over 40. Contrary to their official schedule, they did not go to the Warsaw University of Technology, but headed instead for the police training center in Legionowo, an hour’s drive from the capital. There, they received four weeks of intensive training in crowd management, person recognition, combat tactics, command skills, behavior in crisis situations, protection against gases used by police, erecting barricades, and especially shooting, including the handling of sniper rifles.

Such training took place in September 2013, while the Maidan Square protests were allegedly triggered by a decree suspending preparations for the signing of the Ukraine-European Union Association Agreement, which was issued by Prime Minister Mykola Azarov on November 21, i.e. two months later.

The Polish weekly refers to photographs attesting to the training, which show the Ukrainians in Nazi uniforms alongside their Polish instructors in civilian clothing.

These revelations warrant a fresh look at the resolution adopted in early December 2013 by the Polish Parliament (Sejm), pledging its "total solidarity with Ukrainian citizens who, with strong determination, are showing the world their desire to achieve the full membership of their country in the European Union." Naturally, the MPs were not yet aware of their country’s involvement in the training of the very individuals who were planning - and ultimately achieved - a violent takeover of power.

This scandal illustrates the role assigned by NATO to Poland in Ukraine, analogous to the one entrusted to Turkey in Syria. The government of pro-European liberal Donald Tusk is fully committed to playing its role. Foreign Affairs Minister Radosław Sikorski - a journalist and former political refugee in the United Kingdom - was the mastermind behind Poland’s integration into NATO. As a member of the "Weimar Triangle", he was one of three EU representatives who brokered the 21 February 2014 agreement between President Viktor Yanukovych and the three main EuroMaidan leaders [2]. Needless to say, the Ukrainian president was unaware of the Polish representative’s entanglement with the rioters. As for the Interior Minister and special services coordinator, Bartłomiej Sienkiewicz (the great grand-son of novelist Henryk Sienkiewicz, best known for Quo Vadis?), he co-founded the Office for State Protection (Urzd Ochrony Państwa), Poland’s current intelligence agency. He also co-created and served as vice-president of the Centre for Eastern Studies (Ośrodek Studiów Wschodnich), a national think-tank dealing with the situation in Eastern Europe and the Balkans, with particular emphasis on Ukraine and Turkey. It exerts a profound influence on the West’s perception of current events, through its agreements with Carnegie Foundation [3].

During Yulia Tymoshenko’s government (2007-2010), the current interim president of Ukraine, Oleksandr Tourtchynov, had served as intelligence chief and deputy prime minister. He liaised at the time with the Poles Donald Tusk (already Prime Minister), Radosław Sikorski (then Defense Minister) and Bartłomiej Sienkiewicz (director of the private intelligence firm ASBS Othago).

To overthrow the government of its neighbor state, Poland resorted to Nazi activists in the same way that Turkey uses Al-Qaeda to overthrow the Syrian government. Not only is it not surprising to see the current Polish authorities rely on the grand-children of the Nazis that the CIA tucked into the NATO Gladio network to fight against the Soviet Union, but we should also be reminded of the controversy which broke out in the 2005 Polish presidential election, when journalist and MP Jacek Kurski revealed that Józef Tusk, the grandfather of Donald Tusk, had intentionally enrolled in the Wehrmacht. After denying the facts, the Prime Minister finally admitted that his grandfather had indeed served in the Nazi army, but claimed he had been forcefully conscripted after the annexation of Danzig. A recollection that speaks volumes about how Washington selects its agents in Eastern Europe.

In summary, Poland trained a mob of thugs to overthrow the democratically-elected president of Ukraine and pretended he was subscribing to an appeasement agreement with him on 21 February 2014, while his rioters were in the process of seizing power.

Moreover, there is no doubt that the coup was sponsored by the United States, as evidenced by the telephone conversation between Assistant Secretary of State Victoria Nuland and Ambassador Geoffrey R. Pyatt [4]. Similarly, it is clear that other NATO members, including Lithuania (in the past, Ukraine was dominated by the Polish-Lithuanian empire), and Israel in its capacity as a de facto member of its military command structure, took part in the coup [5]. This arrangement suggests that NATO now runs a new Gladio network in Eastern Europe [6]. In addition, following the coup, mercenaries working for Greystone Ltd., a subsidiary of Academi, were deployed in the country in coordination with the CIA [7].

These facts radically modify the perception that we may have had of the coup of 22 February 2014. They undermine the arguments provided supplied to the press by the U.S. Department of State (points 3 and 5 of the factsheet dated March 5) [8] and constitute an act of war under international law. Therefore, the arguments peddled by the West regarding the ensuing the events, including the accession of Crimea to the Russian Federation and the current uprisings in East and South Ukraine, are null and void.

[2] “Agreement on the Settlement of Crisis in Ukraine”, Voltaire Network, 21 February 2014.

[7] “US mercenaries deployed in Southern Ukraine”, and “CIA director in Kiev searching for missing mercenaries”, Voltaire Network, 4 March and 16 April 2014.