While everything is being set up to create an independent Kurdistan, Thierry Meyssan sees a manipulation of the Kurdish peoples’ dream to profit Israel, the United States and Turkey. Also, he denounces the Barzani ethnic cleansing project and observes the PKK opposition to the creation of a "Kurdistan" of this nature. 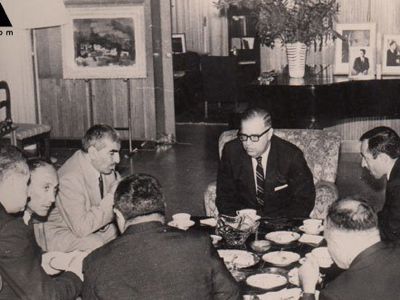 During the 60s, Mullah Mustafa Barzani (the father of Massoud Barzani) approached Washington and the Shah of Iran. He became an officer of the Mossad. Seen here in Israel with Abba Eban (Foreign Minister) and General Meir Amit (Director of the Mossad).

When David Ben-Gurion proclaimed the State of Israel unilaterally, supposed defense needs created a security zone around it. It was the implementation of the European strategy of "steps": Israeli wars attempting to expand its territory and, failing that, to demilitarize the areas on its border. However, with the emergence and spread of missiles, the freezing of "steps" no longer guarantees much. So that in 1999, Israel hesitated to return the Golan [1] and in 2000, it chose to withdraw from southern Lebanon rather than continue to be harassed by Hezbollah.

Gradually, another military doctrine has emerged: the security of a country depends on the ability to destroy threatening missiles from afar. Now it is necessary to not only demilitarize "steps" to protect from a land invasion, but also to provide a circle of protection beyond enemy states to neutralize the threat of missiles. Hence the creation of South Sudan (2011) and soon Kurdistan (2015?). In this way, Israel will be able to threaten Egypt, Syria and Lebanon all at once.

The experience of South Sudan shows the artificial nature of these creations. It is currently a state without statehood, a lawless area occupied by the Israeli army.

From the U.S. point of view, the creation of Kurdistan is a step in the remodeling of the "Middle East region" (Greater Middle East), that is to say, the division of the area into ethnically homogeneous micro-states, easy to dominate. That is why the Pentagon has been conspicuously absent. At a closed meeting during which the Secretary of Defense, Chuck Hagel and the Chief of Staff, General Martin Dempsey, came to explain to congressmess situation in Iraq, they not only claimed to have lost the Abu Bakr al-Baghdadi file (and thus didn’t know why they arrested him in 2004 and why they released him a few months later) [2], but also admitted to having no intervention plan and leaving the field entirely open to the Islamic Emirate and Kurdistan. [3]

From the Turkish point of view, this "Kurdistan" is also a boon to solve its own Kurdish problem. Prime Minister Recep Tayyip Erdoğan whispered the whole operation to the ears of the Barzani family. Moreover, he had his Parliament pass a law authorizing negotiation with the Kurds in Turkey: parliamentarians who contribute to disarm and integrate the rebels will be exempt from prosecution. [4] The Prime Minister hopes to be elected president with the votes of Turkey’s Kurds who would thus thank him for sponsoring "Kurdistan" abroad. Of course, it is unlikely that he will continue his overture once elected.

The Kurdish people would be wrong to believe that the "Kurdistan" offered by Israelis and Turks will be that to which they aspire. In contrast to their ancestor Saladin the Magnificent who liberated and unified the Levant, the Barzani clan will separate them from other populations in the region, Arabs, Armenians, etc.. and transform them into apartheid auxiliaries. 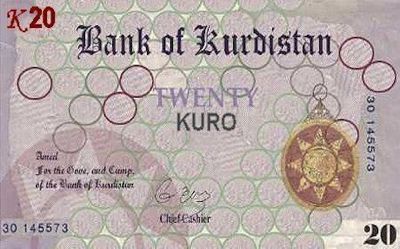 While on the Internet, members of PDK discuss their future currency, the Kuro [5], the Barzanis already behave as if they had won with Israeli assistance. They sent the peshmerga to seize the oil fields of Kirkuk and Bai Hassan - allegedly to secure them from Baghdad maneuvers - and expel Arab workers [6].

There can be no doubt: the Barzanis’ Israeli ethnic cleansing project is just beginning.

Abdullah Öcalan’s PKK has already called for not falling into the trap. He has published an excerpt from the secret June 1st meeting held in Amman at which armed Islamist groups and Massoud Barzani’s PDK sealed their alliance and planned a coordinated attack on Iraq [7]. The PKK has called for a general mobilization of the Kurdish people against the Barzani Israeli project.

For his part, the Iraqi Prime Minister, Nouri al-Maliki, has revealed that his army could not attack the High Command of the Islamic Emirate ... because it was located in Erbil and protected by the local government of Kurdistan.

Two lines are therefore opposed, but only the Kurdish people can defeat the Israeli plan.