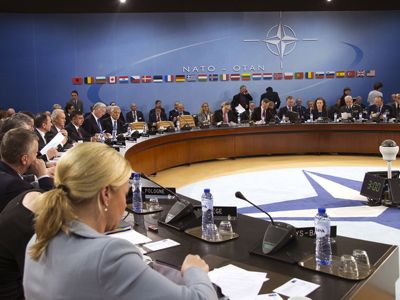 For NATO’s defense ministers meeting in Brussels yesterday, it was "a very busy day." After the bilateral meeting in which U.S. Defense Minister Chuck Hagel sent instructions to the NATO Secretary General Jens Stoltenberg, the Nuclear Planning Group met (Italy participates in this group, violating the Non-Proliferation Treaty). What they decided is unknown, since they issued no press statements. But, since Washington has reiterated that "NATO will remain a nuclear alliance," it can be deduced that they decided to accelerate the ’’modernization” of U.S. nuclear forces deployed in Europe (including Italy) and the strengthening of the French and British forces.

Then the NATO-Georgia Commission met and gave its appreciation for Georgia’s contribution to operations in Afghanistan and the "NATO Response Force" (encouragement for the now certain admission of Georgia into the Alliance). After this constructive beginning, the North Atlantic Council met with the participation of 28 defense ministers, announcing that NATO has decided to strengthen its military forces to conduct "the full range of missions" and "meet the challenges of come from any direction.” Particularly it referenced Ukraine, where "violence is growing" because "Russia continues to violate international standards, supporting the separatists,” and because ’’violent extremism” is spreading in North Africa and the Middle East." For this purpose the "NATO Response Force" will be strengthened, raising its size from 13,000 to 30,000 troops and establishing command and control units in six countries of Eastern Europe. At the same time a “Strike Force” will form, consisting of 5,000 troops, deployable in a few days.

NATO (and with it Italy) is therefore at war on two fronts, eastern and southern. How did we get to this situation? After the Cold War ended, the U.S. began using NATO to maintain its leadership of Western Europe and at the same time conquer Eastern Europe. It demolished Yugoslavia with a war, then extended NATO eastward, encompassing all the countries of the former Warsaw Pact, two of the former Yugoslav republics and three republics of the former USSR. When they enter NATO, the Eastern European countries come to depend more on Washington than BruxelIes [than the EU].

But something is jamming up the U.S. plan for conquest: Russia adapts to the crisis and tightens growing economic relations with the EU by providing the bulk of the natural gas, and opens up new business opportunities with China. This endangers U.S. strategic interests. It is at this point that the crisis broke out in Ukraine: after using years of preparation to take control of key positions in the military and training the neo-Nazi groups, NATO promotes the Kiev putsch. Thus it forces Moscow to move in defense of the Russian-speakers in Ukraine, exposing Russia to the sanctions of the U.S. and EU. And the Russian counter-sanctions, damaging especially the EU, facilitate the plan of the transatlantic partnership for trade and investment through which Washington seeks to increase U.S. influence in the European Union.

At the same time, U.S.-led NATO extends its strategy to North Africa and the Middle East. The demolition of Libya with the war, the same operation launched in Syria, the revival of the war in Iraq, the use of a double-edged Islamic formations (supported to bring down governments NATO targeted, then used as a pretext target to justify other armed interventions) part of the U.S./NATO strategy.