While the Atlanticist press hails the new US doctrine of national security as a willingness to first explore non-military means to resolve conflicts, Thierry Meyssan has read an imperialist profession of faith and a declaration of war on the world. Readers can refer to the original document which can be downloaded at the bottom of this page to see who is right. 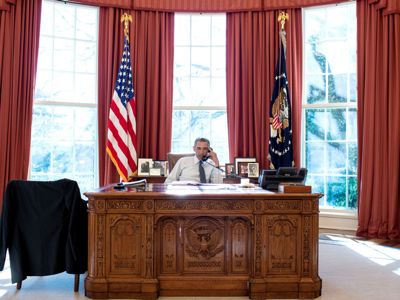 President Obama has released his National Security Strategy, a document that explains the ambitions of his country and whose publication was long-awaited. While wielding newspeak he therein defines his vision of imperialism. Here’s a decryption:

A- The eight obstacles to imperial domination

The first obstacle is the reduction in military spending. "Force is not the first choice of the United States, but sometimes it is a necessary choice", so the US must also keep their overwhelming superiority in military firepower [the US military budget exceeds that of all other states combined in the entire World] so the cutbacks must stop.

The second is the internal danger of armed revolt. Since the attacks of September 11, fear of terrorism allowed the increased surveillance of citizens. Thus, the Patriot Act has "protected individuals vulnerable to extremist ideologies which may push them to attacks on US soil”.

The third is the transnational terrorism that the United States created and must continually manage. So that the fight against this obstacle is not misused to settle internal accounts, it will always be done in strict compliance with US law [not international law since the organization of terrorism is an international crime].

The fourth is the increase of Russian power and incidentally the provocations of the Democratic People’s Republic of Korea, known as North Korea, in a manner to remind that the United States still has not overcome and they can always resume the war.

The fifth is the possible accession of new states to nuclear status, which would allow them to resist Washington. International public opinion thinks here of Iran, but President Obama actually thinks of Korea. And no matter that he never kept his denuclearization promises nor that NATO is employed to violate the signed commitments of the Non-Proliferation Treaty.

The sixth is climate change that pushes people to migrate and therefore threatens the status quo.

The seventh is the questioning of the exclusive control of the United States on common areas.
First, cyberspace: the United States being both the owners of the Internet and wielding a gigantic system of illegal wiretapping, they did not expect that some are using this medium to avoid paying royalties for patents, copyrights and other brand rights that constitute an annuity today, the first source of income.
Next, space: The United States supports the European Code of Conduct in Space, which is a way to escape the Russian-Chinese Draft Arms Placement in Space Ban Treaty.
Finally, air and sea. From the Atlantic Charter, the United States and the United Kingdom have appointed themselves air and sea police. They guarantee the free movement of goods and thus extend their thalassocracy.

The eighth is the risk of an epidemic. For the past year, the United States, along with thirty allies, has set up the Global Health Security Agenda, which aims to detect and contain outbreaks as well as respond to bio-terrorism.

First, Americans must be put to work, not for them to live with a better standard of living, but in order to ensure the country’s economic power.

Second, the US faces an energy security issue not because they would have difficulty in sourcing - they are now in surplus with the Mexican oil they discreetly took over - but because Russia claims to follow their example controlling the global gas market.

Third, US leadership in science and technology subjects must no longer be based on brain immigration, which tends to be scarce, but on its own school system.

Fourth, the new economic order has to make the US the #1 investment destination in the world. Therefore each encouragement to increase investment here and there is perfunctory.

Fifth, the US must use extreme poverty in the world to impose its products.

The US is impeccable in terms of "Human Rights". This expression must be understood in the Anglo-Saxon sense to protect individuals against the arbitrariness of states, but especially not in the sense of the French revolutionaries for whom the first "right of men and citizens," is to not elect leaders among the elite. You must be your own leader.

The Obama administration has ended the practice of torture and guarantees the rights of its prisoners. Never mind that the CIA members who performed experiments on prisoners are not prosecuted for their crimes, or that no investigation has been conducted on the 80 000 people who were illegally detained in international waters on Navy boats during the Bush era. Similarly, one is asked to believe that the NSA does not collect any information to suppress political opinions, nor does it transmit information to the Advocacy Center to encourage US companies at international tenders.

The United States defends universal principles: freedom of expression [except for Serbian, Iraqi, Libyan and Syrian television they destroyed], freedom of worship [but not freedom of conscience] and of assembly, ability to choose their leaders democratically [except for the Syrians who elected Assad to 88%], and the right to a process and a fair trial [but only in regard to criminal law among others]. They defend the most vulnerable communities, such as ethnic and religious minorities [but neither the Yazidis, neither Catholic or Orthodox of the Middle East], the disabled, LGBT [only because it costs them nothing], IDPs [except Mexicans trying to cross the border] and migrant workers.

The United States supports emerging democracies, especially after the Arab Spring. That is why they supported al-Qaida in its revolution against the Libyan Arab Jamahiriya and still argue against the Syrian Arab Republic. They also struggle against corruption, knowing that they have nothing to be ashamed of because members of Congress do not receive money secretly to change their votes, but declare it on a register.

The US will continue to subsidize associations abroad by choosing their interlocutors so as to camouflage their coups in "color revolutions".

Finally, the US will work to prevent mass massacres [but not the ones they commit like the massacre of 160,000 Libyans that they bombed after having received a mandate to protect]. To do this, they will support the International Criminal Court [provided that it does not sue US officials].

Far East: Although China is competing with the United States, they will avoid confrontation and "seek to develop a constructive relationship" with Beijing. However, as one is never too careful, they will continue moving their troops to the Far East and are preparing for World War.

Europe: The United States will continue to rely on the European Union which they have imposed on Europeans, their main customer. They will want to use the EU, their "essential partner" against Russia.

Middle East: The US shall guarantee the survival of the Jewish settlement of Palestine. To do this, it will continue to ensure it has a very important military technological advance. Above all, it will continue to build a military alliance between Israel, Jordan and the Gulf states led by Saudi Arabia, which should definitively bury the myth of the Arab-Israeli conflict.

Africa: The United States will subsidize the "Young Leaders" they will help get democratically elected.

Latin America: The United States will fight for democracy in Venezuela and Cuba, who continue to resist.

Concluding his speech, President Obama stressed that this program can only be accomplished by restoring cooperation between Republicans and Democrats, which is a way of reminding of his proposed increase in military spending.

To be understood, the new national security doctrine must be placed back in context. In 2010, President Obama had abandoned the theory of "preventive war", that is to say, the right of the strongest to kill anyone he pleases. This time, he is abandoning the "Remodeling broader Middle East project.” In light of the principles set out above, it can be concluded that the US will push Daesh to Russia, it will ultimately not recognize the independence of Iraqi Kurdistan, and it will entrust the security of Israel to Jordan and Saudi Arabia, not Russia as envisaged in 2012.

The Obama Doctrine will go down in history as the finding of a failure and the announcement of a catastrophe: Washington abandons its proposed military reorganization and launches anew the development of its armies. Over the past 70 years, the country’s military budget has been increased, except in 1991-95 when they thought to conquer the world by economic means alone and in 2013-14 when they became aware of their disorganization. Indeed, for the past several years, the more money it puts in its armies, the less they function. But nobody has managed to reform the system, neither Donald Rumsfeld nor Chuck Hagel. Therefore, it must always feed more to Moloch, both from a budgetary point of view and by offering new wars for it to fight.