The USA and Russia become allies in Syria

The meeting of the International Syria Support Group seems to have marked the takeover of the Syrian situation by the White House, to the detriment of the « neo-conservatives » and the « liberal hawks ». The final declaration imposes supervision of the UNO by the US and Russia, which removes Jeffrey Feltman from his prerogatives. It imposes free circulation of humanitarian aid and the end of hostilities. The formula chosen legitimises Russian military action, not only against the al-Nusra Front and Daesh, but also against Ahrar el-Sham and Jaysh el-Islam. However, the declaration does not mention the Franco-British project for the creation of a pseudo-Kurdistan. 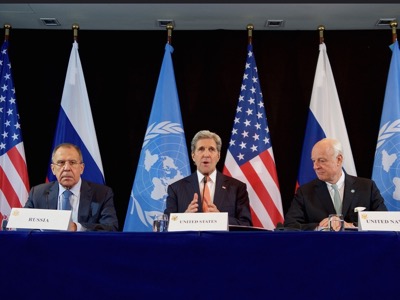 Press conference by Sergeï Lavrov, John Kerry and Staffan De Mistura, at the Hilton in Munich, after the meeting of the International Syria Support Group.

Since the conference of the Friends of Syria, in Paris on the 4th July 2012, the war against Syria had escaped the control of the White House and the Kremlin. The agreement they had reached during the first Geneva Conference, on the 30th June 2012, had never been implemented. The numerous ulterior tentatives for peace had all been sabotaged by a group of warmongers which included top-level US political personalities (John McCain, Hillary Clinton, Jeffrey Feltman, David Petraeus, John Allen), and multinationals (Exxon-Mobil, the KKR investment fund, the private army Blackwater-Academi), as well as certain states (Germany, Saudi Arabia, France, Israël, Qatar, the United Kingdom, Turkey).

However, after the 30th September 2015, Russia deployed a considerable strike force to bomb the « terrorist » groups. Four months later, most of the weapons factories and underground bunkers built by the terrorist groups had been destroyed. Furthermore, the systems developed for transporting the oil stolen by Daesh have also been destroyed. The Syrian Arab Army, which has been engaged in ground operations since the 6th January 2016, simultaneously liberated territories on a dozen fronts, with the exception of the North-East. Meanwhile, Saudi Arabia and Turkey deliver reinforcements and arms to the “opposition” forces in the North of the country.

President Obama’s international policy already includes appeasement with Cuba and the change of position regarding Iran. He has less than a year to add peace with Syria. This supposes that he must regain control of the situation and implement a common analysis with his Russian partner. This is why he has concluded a new agreement with Russia and named an « anti-Daesh Tsar », Brett McGurk, for whom he has allotted considerable military means.

Trained as a lawyer, but working as a career diplomat, Brett McGurk served in Iraq under President George W. Bush from 2004. He is part of the team directed by John Negroponte and General David Petraeus which decided to hijack Iraqi anger against the occupying army by provoking sectarian confrontations between Sunnis and Chiites. This means that he is implicated in the creation of the « Islamic Emirate in Iraq », which became Daesh. He then negotiated the conditions for the withdrawal of the occupying forces. Named by President Barack Obama as ambassador to Baghdad in 2012, he was not confirmed by the Senate because of his extra-marital liaison with a journalist from the Wall Street Journal. As a result, he became the assistant to the White House special envoy to the International anti-Daesh Coalition, General John Allen. He was thus able to note that in the absence of clear directives, his boss was not only neglecting to fight the terrorist organisation, but on the contrary, was supporting it until the arrival of Russian forces and his own resignation. Now in charge of operations, Brett McGurk is preparing the eradication of the Caliphate outside Syria, but not entirely in Iraq. In order to do so, he will have at his disposition twice the military budget of his predecessor, and will be supported both by the Syrian Arab Army and the Kurdish troops in Syria.

The agreement between the White House and the Kremlin

The White House and the Kremlin have agreed that the eventual fall of the Syrian Arab Republic would plunge the whole region, including Israël, into chaos. Consequently, what was once the original objective of George W. Bush and Ariel Sharon is today feared by Barack Obama and Tsahal.

It seems that the White House has given up the idea of dismembering Syria, and has agreed with the Kremlin to halt the Franco-British project for the creation of a pseudo-Kurdistan in the North-East of the country. From the US point of view, there is no question of allowing Paris and London to resume their status as colonial powers in the Near East, even though this argument had been used to tempt them in and implicate them in the « Arab Spring » operation.

Finally, the White House and the Kremlin used Geneva 3 to allow the opposition sponsored by Saudi Arabia to discredit itself. Indeed, this group successively refused to negotiate, then attempted to impose preliminary conditions, then, finally, unilaterally refused to allow the free circulation of humanitarian aid, although Damascus had accepted it.

The convening of the International Syria Support Group (ISSG), on the 11th and 12th February 2016 in Munich, enabled the White House to regain control over « its » opposition, in particular over Jeffrey Feltman, the political head of the UNO. Since he was unable to revoke his power, President Obama relegated his position to that of a senior civil servant by forcing John Kerry and Sergeï Lavrov to announce that they would work together to supervise the continuation of negotiations. If this announcement should be supported by facts, the conspiracists would lose their diplomatic advantage, having already lost their military superiority.

The ISSG has agreed to the implementation of the « Geneva Communiqué » - that is to say the plan composed by President Bachar el-Assad and completed by Kofi Annan – according to the modalities of Security Council Resolution 2254. Although France has not specified whether or not it maintains reservations about the « Geneva Communiqué » - which it alone interprets, on the contrary, as the capitulation of the Syrian Arab Republic – it has adopted the final declaration of the Munich meeting.

This declaration plans for the free circulation of humanitarian aid within a week – which only the « opposition » had refused – and the « cessation of hostilities », preliminary to a « cease-fire ». For each of these two objectives, an operational Force has been created under the co-Presidency of the United States and Russia, and with the participation of those states which are able to apply pressure to the opposing factions.

Concerning humanitarian aid, the ISSG has agreed that it will be transported within the week, either by airborne or land delivery, to seven specially-indicated locations. The final declaration specifies that « … humanitarian access should not benefit any particular group to the detriment of others, but must be offered by all parties to all those in need, in full conformity with Resolution 2254 and international humanitarian law ». Apart from this, the United States and Russia « … will make sure that the aid convoys shall be used only for humanitarian purposes ». In fact, we know that since July 2012, Jeffrey Feltman has been using UNO convoys to supply not only food and medication to the « rebel zones », but also arms.

The expression « cessation of hostilities » sounds like a synonym for « cease-fire », but it also applies to Russia, without implying any legal consequences. By adopting the final declaration, Moscow has agreed not to bomb any targets other than the groups listed as « terrorists » by the Security Council. However, during the Press conference with John Kerry and Sergeï Lavrov which followed the Munich meeting, the Russian Minister for Foreign Affairs pointed out that Ahrar el-Sham (« Islamic Movement of the Free Men of the Levant ») and Jaysh el-Islam (« The Army of Islam ») have publicly confirmed their ties with these terrorist groups. Ahrar el-Sham is financed by Turkey and Qatar, works with Pakistani military instructors, and has claimed ties with the Afghan Talibans. Jaysh el-Islam is financed by Saudi Arabia, works with instructors from Academi, and brags about sharing the ideal of Oussama Ben Laden and collaborating with al-Qaïda. What’s more, its founder, Zahran Allouche, has declared that he wants to « clean up » the country, clearly making a call for the extermination of all Alawites. It therefore does not seem that Moscow’s engagement will modify its action on the ground, but on the contrary – despite the formal appeal by John Kerry to « modify the targets » - that the final declaration from Munich confirms its legitimacy.

We may note that the final declaration from Munich postpones the question of the « political transition» until the resumption of the Geneva 3 negotiations. By doing so, it definitively deprives the 114 personalities selected by Saudi Arabia of any hope of a ministerial veneer. Indeed, these personalities are all linked with the above-mentioned armed groups. On the other hand, it opens perspectives for personalities from the opposition, inside Syria and in exile, who have been invited to Geneva after having denounced the use of arms. 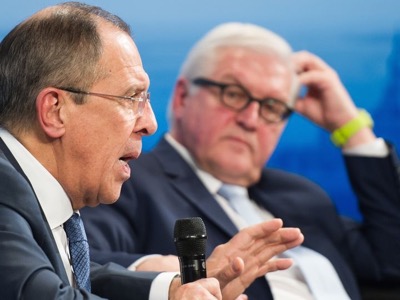 During the Conference on Security, a bitter clash opposed Sergeï Lavrov and Frank-Walter Steinmeier concerning the legitimacy of bombing by the Coalition and by Russia.

Saudi Arabia and France will not let go

While the final declaration from Munich represents an unprecedented advance compared to the last three years, it did not fail to raise criticism from those who adopted it half-heartedly. Thus, Saudi Arabia, via the voice of its Minister for Foreign Affairs Adel al-Joubeir, repeated, during the annual Conference on Security that followed, that there would be no peace in Syria as long as President Bachar el-Assad remained in power. While France, via the voice of its Minister for Defence Jean-Yves Le Drian and its Prime Minister Manuel Valls, repeated during the same meeting their accusations against the Syrian Arab Republic and Russia – the use of barrel-bombs, the organisation of famine, the bombing of civilians. On top of this, they equated the President of the Republic and the « Caliph », judging them both to be criminals, and that, de facto, only the armed Islamist groups named above had earned the legitimacy to exercise power. Turkey, which, in the preparatory documents for the Conference, was accused of deploying « paranoid politics », was too busy defending itself to comment on the final declaration of the ISSG. Instead it gave voice to its artillery and bombed the Kurdish positions in the North of the country.

Putting an end to three years of internal turbulence and hesitation, the White House has reassumed control of the Syrian situation, named Brett McGurk as the man to expel Daesh from Syria, and created a Directorate with the Kremlin which relegates Jeffrey Feltman to his role as a senior civil servant for the United Nations.

The final declaration from the Munich meeting provides for the free circulation of humanitarian aid and a cessation of hostilities within the week.

Its formulation legitimises the Russian bombing of Ahrar el-Sham and Jaysh el-Islam, groups which have been publicly armed by Turkey, Qatar and Saudi Arabia.