Who stands to gain if banking secrecy is abolished?


The G 20: Arranging Financial Markets in a Hierarchy

The first major international operation of the Obama Administration is the G20 summit in London. It is focussed on the global domination of Anglo-Saxon finance. Two important decisions have been taken: increasing the resources of the IMF and the World Bank and “abolishing banking secrecy”. Jean-Claude Paye notes that this new regulation – which in fact aims at moving money back into Europe – benefits Anglo-Saxon legal structures for money laundering: trusts and the LLC. 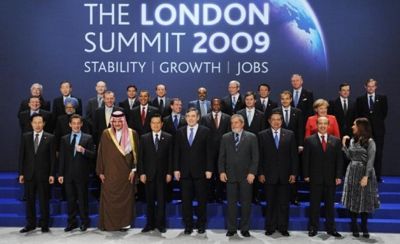 The Second Summit of the Heads of State and Governments of the G20 (London, 2 April 2009).

On the one hand, the G20 presented a programme of 1,100 billion dollars allocated to support credit. The crux consisted in increasing the resource of the IMF. However no plan for coordinated global relaunching has been announced.

On the other hand, the 5 000 billion dollars announced is simply the total national plans, that is, the sum of different measures. [1]. From simple loans or guarantees are accounted for. There is, at the same time, some public expenditure, that arises from the relaunch and measures for lowering taxes. However, these do not automatically translate to an increase in household consumption, but rather an increase in the value of financial assets.

As with all national economic policies, the aim is not to kick-start the economy by increasing household demand but to promote the redistribution of revenues, [channelling them] principally to the banking sector. This process is accompanied by a more pronounced hierarchization of the international financial system.

An indicator of the relationships between global forces

This summit is revealed as an instrument of Anglo-Saxon dominance in international finance. The thrust of the work has focused on the “fight against tax havens”. The action is established on the basis of three lists that have just been established by the OECD.

The black list – this only consists of four states that include Costa Rica and Uruguay. They are countries having no significant relationship at the international level. Following commitments “to proceed to exchanges on tax information on the basis of the OECD guidelines» [2], they have just been removed from this list, which is now blank.

The grey list – this includes countries that “have tried to take action on fiscal cooperation”. It includes Switzerland and Luxembourg, but also, by way of example, Belgium.

The white list - this comprises cooperative countries, including the United Kingdom, which with the City, has one of the key offshore centres in the world, as well as four of its “dependent territories”: Jersey, Guernsey, the Isle of Man and the Virgin Islands. The United States is evidently part of this, although no note designates the less than transparent practices of States such as Delaware or Wyoming. [3].

Thus the results of the G20 faithfully translate the new power relations at the international level. The United States has unveiled its power to reorganize the financial system to its advantage. But the European Union has shown its eagerness to support Anglo-Saxon interests while China has succeeded in preserving its tax havens, Macao, Hong Kong and Singapore. As for Israël, it confirms its state of total anomie, a territory insulated from the law and international agreements, since, while generally considered a country that launders dirty money, it does not appear on any list, neither black, grey nor white.

The offensive is focussed on banking secrecy, presented as the preferred option for tax avoidance. At the time of their final declaration, the G20 countries have even declared that “the Era of banking secrecy is over”.

However currently, half the offshore market is concentrated in trusts, an Anglo-Saxon legal creation, which does not require banking secrecy to be able to escape the reach of the tax authorities. It is no longer a market of banking discretion but of legal techniques in fiscal engineering. Thus tax evasion is progressively supplanted by these legal structures. Trusts have become the primary tool to avoid tax and the most effective substitute for banking secrecy.

The trust is a vehicle of Anglo-Saxon law that allows a wealthy person to divest himself of his fortune, so that the tax authorities do not deem him to be the owner. If the trust is “discretionary and irrevocable”, the bank that opens the account cannot ask for the identity of the beneficiary. A person who has established such a trust abroad is not taxed because he is no longer considered as the owner of its property. As for the beneficiary of the trust, which is in theory, taxable, its/his/her identity is not required when the account is opened.

The Jersey Islands and Guernsey Islands, both British territories, are specialized jurisdictions for setting up trusts. Ditto for Delaware and the Caribbean, which serve as havens for “grey” money coming from the US as well as Miami which hosts in the US, Latin American capital that is seeking to avoid tax authorities in their countries. Singapore, dealing with Asian or European wealth, has the same function [4].

The big Swiss banks have also catapulted onto the market of trusts. They ask for little information on the beneficial owners of “discretionary and irrevocable: trusts, but they record the identity of the person establishing the trust. The practice among Anglo-Saxon banks is even less rigorous. They only record information on the contracting party, the “trustee”, the company that manages and administers the trust. In practice, this allows them to keep the person desiring to avoid tax authorities completely out of the picture. In this way, they acquire an even higher degree of confidentiality, without banking secrecy, strictly speaking. Even if, during a determined inquiry, the law requires these financial institutions to provide information on their customers, the latter cannot provide the information that they do not have.

Thus the Anglo Saxon jurisdictions have a substantial advantage over the Swiss jurisdictions if banking secrecy is abolished: the opacity of their trusts is more complete.

A hierarchization of the financial system

The G20’s number one target is Switzerland, one of the principal financial places in the world. Here we have an attempt to reorganize the international financial system at its expense. Matters have already been made clear through the UBS case. The action of the US administration against the Swiss bank is the use of an operation against its nationals avoiding tax in order to modify, to its advantage, the rules governing how the global banking system works. [5].

The United States and its Caribbean satellite as well as offshore centres under the British flag, each control a market of “grey money” almost equal to Switzerland’s. Following the US offensive, Switzerland that still has 27% of the global savings market managed outside the country of residence, could quickly cede the terrain to its principal competitors: the United Kingdom and its Anglo-Normandy islands, the Island of Man and Dublin that deals with 24% of this capital as well as New York, Miami, the Caribbean and Panama which has 19% of the 7,300 billion dollars invested outside its borders. Half of this sum would not be declared. [6].

Pursuant to the threat of being listed on the OECD list of tax havens, Switzerland has introduced a loophole in its [protection of] banking secrecy. It is going to abandon the distinction between fraud and tax avoidance and to allow the exchange of information, on a case-by-case basis, in response to specific and reasoned requests, from third state tax authorities. Luxembourg and Austria, the two final members of the European Union desiring to keep their banking secrecy, have done the same thing. However, the question has never arisen that US states such as Delaware, where LLCs (Limited Liability Companies) are exempt from all forms of tax, should be included on this list. [7].

In the context of the financial crisis, this operation under US hegemony, “of the struggle against fraud” appears rather like an attempt by States to recover capital with a view to it financing in part the bail-outs to banks and to insurance companies. However, all those who defraud the tax authorities have not been called to make their contribution. The best resourced will always have the option of appealing to fiscal engineering to avoid tax. This operation of tax avoidance will be made all the more easy If they invest their capital in the US or Anglo-Saxon offshore centres, in the territories placed under the direct control of the dominant power.