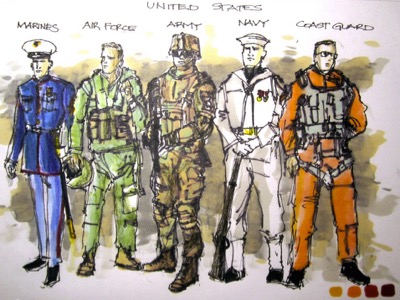 What is the connection between the following pairs of societies that are geographically, historically and culturally quite distinct:
• Kosovo and Libya/Syria,
• Iraq and Afghanistan,
• Ukraine and Brazil/Venezuela?
[The answer]: Being caught up in the US global strategy, illustrated by the Pentagon’s map.

In addition to the six geographic commands are three centres [responsible] for operations anywhere in the world:
• the Strategic Command in charge of nuclear forces;
• the Command for Special Operations; and
• the Command for Transport.

Heading the European Command is a general or admiral appointed by the US President. This general/admiral automatically assumes the office of the Supreme Allied Commander in Europe.

Nato is therefore slotted into the Pentagon’s chain of command. Thus it forms an essential part of the US strategy. This means eliminating any State or political or social movement that threatens the US’s political, economic and military interests. For the US, while still the biggest world power, is losing ground faced with the emergence of new state and social actors.

This strategy has many tools of implementation: from open war - see the air, sea and ground attacks in Yugoslavia, Afghanistan, Iraq, Libya - to the covert operations led both against these countries and other countries, most recently in Syria and Ukraine. For these operations, the Pentagon has special forces, around 70,000 specialists that “operate daily in another 80 countries around the world”. It also has a shadow army of contractors (mercenaries): the, Foreign Policy [1] provides evidence that in Afghanistan, the Pentagon has about 29,000 mercenaries, that is, three for every US soldier; in Iraq there are around 8,000, two for each US soldier.

As well as Pentagon mercenaries are those of the tentacled Intelligence Community. These include the CIA and 15 federal agencies.

The mercenaries are doubly useful. They can assassinate and torture, without responsibility being attributed to the US. Furthermore, once they have killed, the names do not appear on the list of the deceased. Furthermore, the Pentagon and the secret services have groups that they arm and train, such as the Islamists used for attacks in Libya and Syria and neo-Nazis, used for the coup d’etat in Ukraine.

Another instrument implementing this strategy is [the use of] “non government organizations”. Such organizations, endowed with massive funds, are used by the CIA and the State Department to carry out internal destabilization under the cover of “defending the rights of civilians”.

The action of the Bilderberg group [2] is similarly contextualized. Judge Ferdinando Imposimato denounces this as being “partly culpable for the strategy of tension and disaster” in Italy [3]. The same goes for the “Open Society” of “investor and philanthropist George Soros”, architect of the “colour revolutions”.

To carry out its coup-creating strategy, Washington today is eyeing Brazil to undermine Brics, and Venezuela to undermine the Bolivarian Alliance for the Americas. To destabilize Venezuela - the South Command indicates in a document that has been divulged [4], that it has to cause “a scene of tension that allows combining action on the street with a measured commitment of armed violence».

[2] “What you don’t know about the Bilderberg-Group”, by Thierry Meyssan, Translation Michael McGee, Komsomolskaïa Pravda (Russia) , Voltaire Network, 9 May 2011.