US Tankers lined up in Poland

While the US president elect criticizes the very existence of Nato, the Atlantic Alliance pursues its imperial deployment in Europe. This was organized after the Donbass revolt against the Nazis (set up at Kiev by Nato) who executed the coup. This deployment seeks to spiral the Russian threat so that it can be used as a cover for the military occupation of Eastern Europe. This occupation is supported by the political elites of East Europe whose entire power base is due to the United States alone. 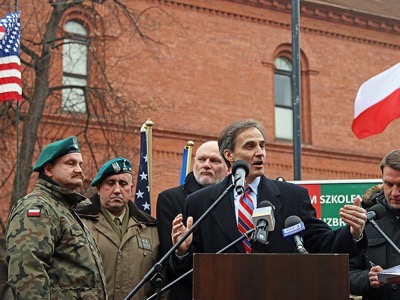 On 12 January, two days after his farewell address, President Obama signalled the way for the biggest lining up of land forces in Eastern Europe following the end of the Cold War: a long convoy of tanks and other US armoured vehicles, coming from Germany has entered Poland. It is the armoured Brigade 3a, transferred into Europe from Fort Carson, Colorado. It is composed of around 4,000 men, 87 tanks, 18 self-propelled howitzers, 144 Bradley combat vehicles and about a hundred Humvees. The entire armament is transported into Poland either by road, or by 900 railway wagons.

At the welcome ceremony that took place in the Polish city of Zagan, the US ambassador Jones said that «gradually, as the threat increases, so too increases the US military lining up in Europe». The nature of the «threat» was clarified by General Curtis Scaparotti, who holds in the tandem the position of the Head of the US European Command and the Supreme Allied Commander in Europe:
«Our forces are ready and positioned should they be needed to contain Russian aggression».
The armoured Brigade 3a will remain at a base in Zagan for nine months. 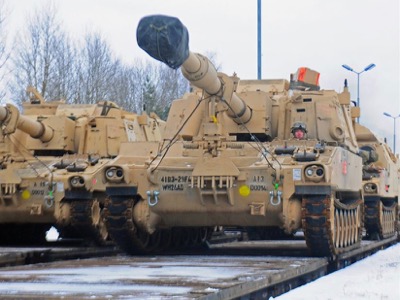 Thereafter, it will be replaced by another unit brought in from the USA. Such a rotation will enable the US armoured forces to be permanently deployed in Polish territory. From here, their units will be transferred for training and drills, to other countries in Eastern [Europe], notably Estonia, Latvia, Lithuania, Bulgaria, Romania and probably also Ukraine. In this way, they will be constantly deployed at the Russian border.

A second US contingent will be positioned this coming April in East Poland, in the so- called «Suwalki Gap», a tract of flat ground, about a hundred kilometres long, that, Nato warns, «would be a perfect crossing for the Russian tankers».

It thus resurrects the US / NATO tools of propaganda deployed in the old Cold War: Russian tankers poised to invade Europe. While stoking the spectre of a non-existent threat from the East, US tankers are arriving in Europe. The armoured Brigade 3a will sit alongside the air and naval forces that the US has already lined up in Europe in the operation «Atlantic Resolve», to «reassure the Nato allies and their partners if confronted by Russian aggression». This operation was launched by Washington in 2014, after intentionally provoking, with the Piazza Maidan putsch, a fresh confrontation with Russia. A strategy which was principally carved out by Hillary Clinton when she was part of the Obama Administration. Its aim? To reduce to nothing Russia’s economic and political relations with the European Union, a relationship that is harmful for US interests.

Poland is playing a central role in anti-Russian escalation. This is why it will shortly receive from the US, long-range cruise missiles, with anti-bunker penetrating capacity, which can also be armed with nuclear heads. And in Poland, the construction of a land installation of a US Aegis missile system, similar to the one that has already started operating at Deveselu in Romania, is underway. Also this one, equipped with Lockheed Martin’s system Mk 41, is capable of launching not only anti-missile missiles but cruise missiles which can be armed with nuclear heads.

However, in Warsaw and other Eastern European capitals – writes The New York Times – there is «grave concern» that the Republican Trump, may strike up an agreement with Moscow that «would threaten the entire effort».

A nightmare torments the governments of East Europe that are forecasting their fortunes on hostility with Russia. A nightmare that the tankers sent by Obama the Democrat, may return home….

Joint statement of the Weimar Triangle ministers for European affairs