Officially, the United States is no longer participating in the operation, “Let’s destroy Syria and Yemen”. It would appear that it is fighting against the jihadists. Yet, the Department of Defense continues to transport weapons to the jihadists. A regular supply chain has just been established. 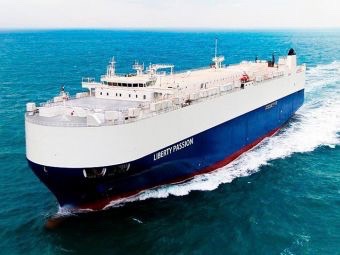 It goes by the name, “Liberty Passion”. It is an enormous, state-of-the art, US ship of the Ro/Ro type (designed to transport vehicles and cargo on wheels): 200 metres long, it has 12 decks with a total area exceeding 50,000 m2, sufficient to transport cargo equal to 6,500 automobiles.

The ship is owned by the US company “Liberty Global Logistics” and it was on 24 March that the ship made its first stopover at the port of Livorno. Thus is established an official, regular connection between Livorno and the harbours in Jordan and Gedda in Saudi Arabia and the voyage is carried out every month by “Liberty Passion” and its sister ships “Liberty Pride” and “Liberty Promise”. The launch of such a service was celebrated like “a festival at the port of Livorno”.

However, not a soul states why the US company has specifically chosen Livorno in Tuscany as the stopover. A US Maritime Administration communication [1] fills the gap with the following explanation: “Liberty Passion” and two other ships, linking up Livorno and Aqaba and Gedda, form part of the “Programme for Maritime Security”, that through a public-private partnership, “provides the Department of Defense with a powerful, mobile private fleet which flies the US flag and is equipped with a US crew”. Each of the three ships has “the capacity to transport about one hundred vehicles for combat and support. These include tankers, vehicles to transport troops, helicopters and equipment for military units”.

And so it becomes clear why the US company has chosen Port Livorno to make the connection with the two southern ports. Port Livorno is linked to Camp Darby, the US army’s logistical base, situated at the border of Livorno. Camp Darby in turn supplies US air and land forces in the following zones: the Mediterranean zone, the Southern zone, the African zone and others. It is the only site for the US army where pre-arranged material (tankers, etc.) is placed together with the supplies: its 125 bunkers store all the equipment for two armoured battalions and two mechanized infantry. Also stocked: huge quantities of bombs and missiles for airplanes, together with “assembly kits” to quickly build airports in the war zone. Two routes can be used so that these and other military materials can be promptly sent to the zone of operation: the first is via Port Livorno, connected to the base of “Canale dei Navicelli” which has recently been enlarged; and the second, is via Pisa’s military airport. From here, departed the bombs used in the wars waged against Iraq, Yugoslavia and Libya.

Documentary sources (AsiaNews [2] and others) report that on its inaugural trip, “Liberty Passion” transported 250 military vehicles from Livorno to Aqaba (the Jordanian port). The ship arrived at Aqaba on 7 April, making its way there via the Suez Canal. Two days before, in Washington, President Trump received King Abdullah for the second time since February thus confirming US support to Jordan against the terrorist threat coming from Syria. However, it is precisely in Jordan, that for year, US, British and French instructors have been training militants belonging to the “Free Syria Army” for terrorist attacks in Syria.

Various reports indicate that an increasing number of US troops, fitted out with tankers and armoured vehicles, are moving to the Jordan-Syrian border. The objective? To take possession, using even Jordanian troops, of the southern band of the Syrian territory, where special US and British forces are operating in support of the “Free Syria Army” which is fighting with Isis. As early as February, President Trump had discussed with King Abdullah, “the possibility of establishing safe zones in Syria”. “Safe zones” is code for balkanizing Syria, now an option, given that, following Russian intervention, it is no longer possible to control the entire territory.

US arms are used for this and other military operations, which include the Saudi war which causes massacres in Yemen. These arms leave from Livorno, a city which, Pope Francis, on the invitation of Mayor Nogarin (Movimento 5 Stelle), will probably visit. Yesterday, once again, Pope Francis denounced “the trafficking of arms which allows money to be made from men and women shedding blood”. Meanwhile several residents of Livorno celebrate the fact that their Tuscan port has been chosen as the stopover for “Liberty Global Logistics”, for this creates huge prospects for development.

As long as the war continues, so does hope [3].

[3] Finché c’è guerra, c’è speranza (“As long as there is war, there is hope”) is the title of the well-known Italian film made in 1974, directed by Alberto Sordi, who also performed in it. The film tells the story of a businessman who becomes wealthy by selling arms in Third World countries, shredded to pieces by war.